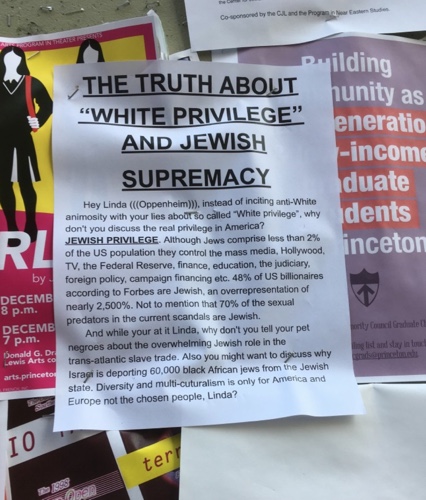 For the second time this year, white supremacist flyers have appeared at Princeton University. It is unclear who’s responsible for posting the flyers, which were spotted on the New Jersey campus Monday, but they came in two varieties: the first, a personal attack against a Jewish resident of the city of Princeton; the second, an advertisement for a fake course at the university called, “Introduction to White Studies: White Guilt and Reparations.”

The personal attack, titled “The Truth About ‘White Privilege’ and Jewish Supremacy,” targets Linda Oppenheim. According to Forward, Oppenheim has worked on racial and justice issues in Princeton and has specifically promoted more pathways for racial inclusivity within the Jewish community.

Whoever targeted Oppenheim was familiar with her work and sought to discredit her.

The flyer, which the Daily Princetonian showcases in full, appears as one might expect—littered with grammatical errors and lies, like the claim that 70 percent of the sexual predators who have been exposed in recent weeks are Jewish.

Read entire article at The Root
comments powered by Disqus