Thomas Weber is the author most recently of Becoming Hitler: The Making of a Nazi (Basic Books) as well as Professor of History and International Affairs at the University of Aberdeen. 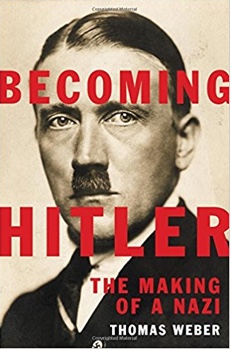 Soon after his politicization and radicalization in the summer of 1919, Adolf Hitler secretly started colluding with Russian nationalists. Driven by a concern on how best to ensure Germany’s national survival in the expected dawn of an age of super-powers, he teamed up with the entourage of one of the pretenders to the vacant Tsarist throne, Grand Duke Kirill Romanov.

Hitler, Kirill, and the Grand Duke’s fellow exiles in Bavaria agreed that neither on their own would be sufficiently strong to put their respective countries on equal footing with the Anglo-American world. Their plan thus was first to restore nationalist regimes in both their countries and subsequently to enter into a permanent and all-encompassing alliance.

In a Washington Post op-ed detailing Hitler’s secret Russian collusion, I raised the question as to whether a line of continuity runs from the actions of Kirill and his supporters to Russian strategic thinking of today.

Yet Hitler’s clandestine collaboration with Russian nationalists is equally instructive in shedding new light on Hitler himself. It allows us to understand which of his ideas he genuinely believed and which ones were driven by opportunism and expediency. Crucially, it reveals that Hitler’s anti-Jewish racism was not of a different degree but of an entire different kind from his anti-Slavic racism. And it brings to the fore the origins of Hitler’s attitudes towards Poles, which would cost more than two million ethnic Polish civilians their lives.

Ever since the moment of his political epiphany in the summer of 1919, Hitler had identified the Jews as the primary source of Germany’s domestic weakness. The insidious influence of Jews and their ideas, he thought, made it impossible for Germany to survive in a rapidly changing world. As a result his anti-Semitism was absolutely unwavering in nature. Anti-Semitism was, in fact, the one area in which Hitler was in private even more radical than in public, even though he was famous for going for ever more extremes in his speeches for political effect. By contrast, Hitler did not display any deep racism towards Slavs.

In the early 1920s, he considered Russians, unlike Jews, to be part of the solution to the strategic challenge Germany faced, rather than lying at its very heart. Only once he came to the realization, while incarcerated in Landsberg Fortress in 1924, that revolutionary Russia was there to stay, did he suddenly change track. Only once concluding that collusion with Russia would not be able to set Germany on an equal footing with the Anglo-American world, did he decide almost overnight to turn Russians into “sub-humans” and to grab their territory. Intriguingly, Hitler thus reconfigured his racism towards non-Jews to fit his geopolitical goals.

Hitler’s secret collusion with Russia in the early 1920s reveals Hitler’s hatred of groups other than the Jews to have been astonishingly flexible. His racism towards Slavs was thus, at least initially, opportunistic in character. More than that, racism was not—as commonly believed—the cause of Hitler’s drive to the east but it was its ex post facto justification.

Hitler’s views towards Poles were, if anything, even more tragic. Unlike Russians, ethnic Poles barely appeared on Hitler’s mental map. In Mein Kampf, Poles are mentioned only in passing, appearing three times in its first volume and six times in the second one. By contrast, Hitler referred to the Anglo-American world twenty-four times as often. Jews appear even forty-seven times as often as Poles. Similarly, in the forty times or so in which he had referred to Poles in speeches and articles in the five years prior to the writing of Mein Kampf, he had never associated them with immutable, negative characteristics.

Hitler’s men killed approximately two million ethnic Polish civilians and hundreds of thousands of Polish servicemen neither because he considered them genuinely dangerous as in the case of the Jews, nor because he genuinely believed them to be inferior (at least not originally). They were murdered for geopolitical expediency because they lived, as far as Hitler was concerned, in the wrong spot.

As he made clear in his secret speech to his generals on the eve of World War II, they lived in a territory that, ever since realizing that a German-Russian alliance would not materialize, he believed needed to be cleared of its inhabitants. Turning for inspiration to the ethnic cleansing with genocidal consequences of the Armenians in World War One, he told his generals:

“I have placed my death-head formation in readiness – for the present only in the East – with orders to them to send to death mercilessly and without compassion, men, women, and children of Polish derivation and language. Only thus shall we gain the living space (Lebensraum) which we need.”

To add insult to injury, it was not just on Hitler’s mental map that Poles barely appeared until he turned on them for geopolitical expedience. Even today, Polish suffering in the Second World War barely has made it onto the mental map of Westeners. In popular culture, there is no Polish Anne Frank, Private Ryan, or Oskar Schindler, who would give a face to Polish suffering at the hand of the Germans.

Europe and the West at large will not be able to grow together unless the world realizes how hurtful it is for Poles that millions of their countrymen were killed for no other reason than Hitler’s geopolitical opportunism. And, more than that, that few people outside of Poland today are even aware, let alone mourn, the loss of life of millions of Poles at the hands of Germans.