Jonathan Harrison, an HNN Contributing Editor, is an adjunct Professor in Sociology at Florida Gulf Coast University (FGCU) and Hodges University whose PhD was in the field of racism and anti-Semitism. 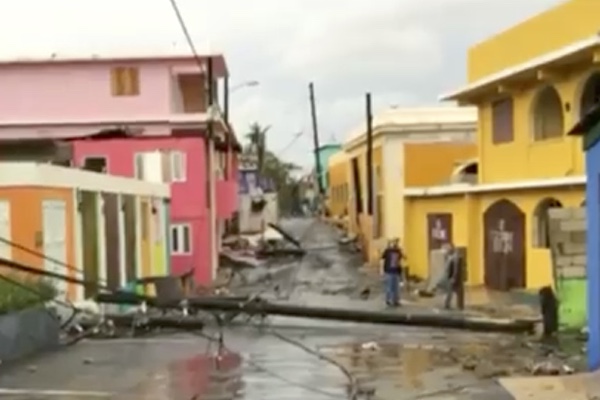 When Donald Trump slandered Puerto Ricans as being lazy and having a dependency culture, Fox News host Tucker Carlson stated that Trump's attacks could not be racist because "Puerto Rico is 75 percent white, according to the U.S. Census." This was a fallacy of the excluded middle because it ignored the fact that someone could be classed as white by one organization but treated as non-white by another, due to the way in which “race” is socially constructed in variable ways depending on factors such as time period, region and class.

Whiteness for Puerto Ricans is subject to contradiction, whereby one can be advantaged on one continuum (such as skin color) but disadvantaged on many others. Puerto Ricans have greater divisions by class than they do by “race,” due to the fact that employers seek professionals and the unskilled in an increasingly polarized job structure (see discussion here). They benefit from being citizens compared to the “undocumented” and those perceived to be “illegals,” but they can be unwanted for temporary work on the mainland because they cannot be deported after their contracts expire. They can produce prized celebrities (such as Jennifer Lopez) but be exposed to cultural racism, whereby “the culture of groups is naturalized in terms of some notion of inferior versus superior nature”(Grosfoguel, 1999). Furthermore, the bureaucrats and opinion formers who assign Puerto Ricans their “race” are often inconsistent in their labelling practices because sometimes it is convenient to deny the population the privileges attached to whiteness, such as when distributing federal resources like hurricane relief.

Tucker Carlson's fallacy is also ignorant (or pretends to be) regarding Puerto Rico's racialization in previous periods. The island came under American rule at the height of American nativism and biological racism, which portrayed the islanders as infantile monkeys in cartoon such as this one: 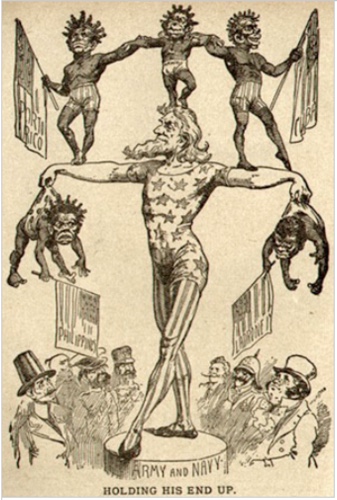 Puerto Ricans did not have a concept of race in the way it evolved in the mainland, so part of their experience of being colonized was the culture shock of the dissonance between their fluid notions of color, which contain at least twenty categories and the fixed hypodescent of the American model, which imposed a dichotomy between a privileged white race and a stigmatized black one that was designed to protect the privileges of slavery and segregation from "miscegenation" and boundary crossing. Clara Rodriguez has shown how Puerto Ricans who migrated to the mainland had to conform to this white-black duality that bore no relation to their self-identifications. White was chosen by those who were light enough to have the option, simply in order to avoid the disadvantage and stigma of being seen as black bodied. Moreover, the census only gave Puerto Ricans two options, white or non-white, with the latter understood to be pejorative, so respondents who would have (as Clarence Gravlee notes) identified themselves as "indio, moreno, mulato, prieto, jabao, and the most common term, trigueño (literally, ‘wheat-colored’)" chose white by default. The falseness of the results is shown by the fact that, after the census made it easier for respondents to choose other for race, they often wrote in their national identity (Puerto Rican) instead of their “race,” as did other Latinos.

Choosing the white option did not protect Puerto Ricans from discrimination. When the federal government gave loans to white homebuyers after 1945, Puerto Ricans were usually excluded on zonal grounds, being subjected to redlining alongside African Americans. Such redlining was also found to be operating on Puerto Rico itself in the insurance market as late as 1998, suggesting it may have contributed to the destitution faced by islanders after natural disasters.

Puerto Ricans who came to the mainland to work in agriculture found themselves being cast as “alien labor” despite their US citizenship, and were also unpopular because they expected greater protections than did Jamaicans or Bahamians. In the 1950s, they were scapegoated for instances of high crime and infectious diseases. In at least one case in Florida, their children subjected to exclusion from both white and schools, making it necessary for them to establish a classroom in their labor camp.

The racist treatment of Puerto Ricans therefore has, for many decades, perpetuated a paradox of whiteness without White Privilege. There have been advantages in being "not black" and "not Mexican" but not the freedom to seek employment, housing and insurance without fear of exclusion or disadvantageous terms. When a hurricane strikes, Puerto Rico finds itself closer to New Orleans than to Florida.