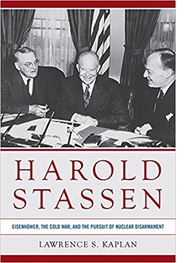 During the post-World War II period liberal Republicans encouraged their colleagues to accept the major domestic legislation of the New Deal and abandon isolationism in favor of embracing international obligations. Harold Stassen of Minnesota was one of these liberal Republicans. Most Americans have forgotten Stassen, and those who do remember him perceive the Minnesotan as a joke for his quixotic twelve Presidential campaigns. However, Lawrence S. Kaplan, emeritus director of the Lyman L. Lemnitzer Center for NATO and European Studies at Kent State University, reminds us that Stassen was once an important politician, who served admirably in the Eisenhower administration as an advocate for nuclear disarmament during the dangerous Cold War years of the 1950s. Basing his conclusions upon detailed archival research into Stassen’s service in the Eisenhower cabinet as head of the Mutual Security Agency and Special Assistant for Disarmament, Kaplan credits the liberal Republican with seeking to “de-escalate and end the Cold War with the Soviet Union, based on the reasonable assumption that the rivalry surrounding nuclear weapons had the capacity to destroy the world” (189). Unfortunately, the internationalism of liberal Republicans such as Stassen has been replaced with the belligerent and narrow nationalism of President Donald Trump.

Harold Stassen was born April 13, 1907 on a farm near St. Paul, Minnesota. After graduating from the University of Minnesota Law School in 1929, Stassen was elected District Attorney of Dakota County five years later. In 1938, Stassen was elected Governor of Minnesota at age thirty-one, and the popular “boy Governor” was re-elected in 1940 and 1942. He resigned from office in 1943 to join the Navy during the Second World War, providing distinguished service as an aide to Admiral William H. “Bull” Halsey. Especially popular among young Republicans, Stassen encouraged cooperation between labor and management, while challenging the isolationism of the Republican establishment. His commitment to international cooperation led President Franklin Roosevelt to appoint Stassen as a delegate to the San Francisco Conference on the United Nations Charter in 1945. Stassen was an enthusiastic supporter of the United Nations, although Kaplan points out that he feared the veto power would limit the organization’s effectiveness.

Many of Stassen’s supporters urged him in 1946 to challenge the re-election of incumbent Minnesota Senator Henrik Shipstead. Instead, Stassen decided to prepare for a 1948 Presidential bid by making a series of speeches and traveling abroad to meet world leaders. In 1948, Stassen was a valid contender for the Presidency and was even granted an interview with Stalin in Moscow. After winning several Republican primaries, Stassen seemed to self-destruct in an Oregon debate when he emphatically demanded the outlawing of the Community Party in the United States, a position that was even a bit too extreme for such staunch anti-communists as Senator Robert Taft of Ohio. Kaplan notes the irony of Stassen later being denounced for not taking a stronger stance in negotiations with the Soviets. Although Stassen’s best opportunity for the Presidency had passed in 1948, Kaplan acknowledges that Stassen’s ego and ambition led the Minnesotan to continue his pursuit of the office.

To keep his name before the public, Stassen accepted the Presidency of the University of Pennsylvania, and the regents supported Stassen’s frequent travels and speeches. In 1952, Stassen again sought the Republican Presidential nomination, although Kaplan argues that Stassen was primarily interested in slowing the momentum of Senator Taft while Eisenhower vacillated on whether to enter the contest. Stassen ended up supporting Eisenhower and was awarded with an appointment as head of the Mutual Security Agency. The position pleased Stassen as it provided him with a seat on the National Security Council and Eisenhower cabinet. Stassen was placed in charge of foreign aid and military and defense assistance programs, including economic and technical assistance. Although technically under the authority of the State Department, Kaplan documents that Stassen often clashed with Secretary of State John Foster Dulles. Kaplan argues that Stassen believed the hard-line approach of Dulles toward the Soviets was undermining efforts to achieve international peace and understanding, while his ego convinced him that the President shared his more conciliatory approach to the Soviets. This assessment was probably true, but Kaplan concludes that Stassen’s overconfidence eventually led to the triumph of Dulles in the cabinet. While Dulles focused upon military assistance to European allies, Stassen emphasized economic and technical aid to regions such as Africa and Asia.

Stassen’s status seemed to expand when he was appointed head of the newly created Foreign Operations Administration which was to oversee all programs for technical, economic, and military assistance, and Stassen announced his support for an Asian Marshall Plan. Dulles was opposed to the new agency, and it was terminated after two years with its responsibilities divided between the State and Defense Departments. Stassen was out of a job, but Eisenhower still valued his counsel, making him a Special Assistant for Disarmament. Much to the chagrin of Dulles, the new appointment continued the bureaucratic and policy disagreements between the two men, and Dulles especially resented the press when they referred to Stassen as “the secretary of peace.” According to Kaplan, a confident Stassen was “convinced that Eisenhower saw him as a kindred spirit in his approach to the Cold War, as opposed to the secretary’s rigid anti-communist stance. He would be a better instrument than Dulles to carry out the president’s initiatives on disarmament” (112). This reading of Eisenhower encouraged Stassen to seek implementation of the President’s open skies proposal for inspection of nuclear arsenals despite the misgivings of Dulles.

Kaplan devotes considerable detail to the diplomatic efforts of Stassen to reach some type of arms control or disarmament agreement with the Soviets despite the intransigence of the Secretary of State. In the final analysis, Dulles finally issued a harsh reprimand of Stassen to which the President agreed. Stassen had shared a memorandum on arms control with his Soviet counterpart without clearing the proposal with American NATO allies such as Britain and France who were pursuing their own plans for the acquisition of nuclear weapons. Although Stassen attempted to maintain his office after the reprimand and continued his efforts at negotiating an agreement limiting nuclear testing, it was clear that the President had lost confidence in him, and in February 1957 Eisenhower asked for his resignation.

In typical Stassen fashion, however, the Minnesotan insisted that he was stepping down to run for Governor of Pennsylvania. After his service in the Eisenhower administration, Stassen would continue to seek elective office for the Presidency, Congress, the Governorships of Minnesota and Pennsylvania, and even Mayor of Philadelphia, but he was unsuccessful in these electoral endeavors. His time had passed, and the tragedy of Stassen is that the frustrated politician failed to recognize this fact, making him somewhat of a joke on the American political scene. But Kaplan argues that the jokes should not be the political epitaph for Stassen, asserting instead that the Minnesotan should be remembered as a “liberal Republican, who had emerged from World War II determined to serve his party and his country, following a path that derived from his experience as one of the fathers of the UN Charter. His belief in his destiny may have been unqualified, but a steadfast conviction that it was possible to live in a world free from the menace of a nuclear bomb resonated throughout his long life” (186). In the age of Trump, the Republican Party could use someone like Harold Stassen.