We Used to Understand the Connection Between Hunger and War

William Lambers is the author of Ending World Hunger and a contributor with Catholic Relief Services. He is a food aid advocate and has been published by the Columbus Dispatch, The Hill, Cincinnati Enquirer and many other media outlets. 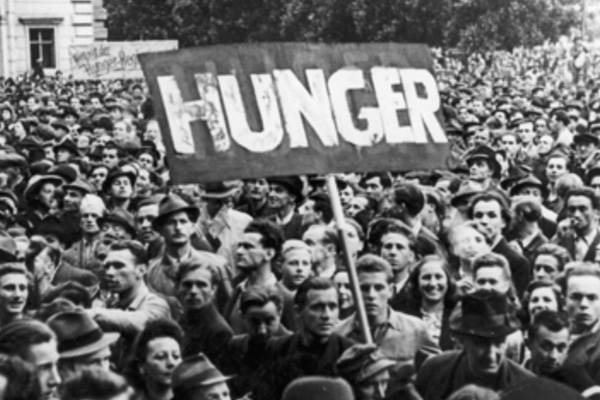 On Memorial Day seventy years ago President Harry Truman proclaimed a prayer for peace to honor Americans who gave their lives in war. He said, "From the sacred memory of beloved friends and relatives who were sacrificed in the ordeal of battle, we may derive inspiration for renewed prayers and redoubled exertions in a mighty striving for peace."

Truman was striving to build peace with far more than words. That very same month a ship from Texas, filled with wheat, arrived in France to a hero’s welcome. This was the opening act of the Marshall Plan which rebuilt Europe from the ashes of World War Two.

The Marshall Plan was forged in the aftermath of the most horrific conflict the world had ever seen. Years of war had left France and the other European nations on the brink of starvation and collapse. American generosity gave them food, a revitalized economy and hope.

The Marshall Plan was the biggest help. It was over 13 billion dollars of aid to stop hunger, poverty, and prevent the chaos that would allow Communism to take over.

Secretary of State George Marshall, the architect of the plan, knew that no peace could exist if people in Europe were living in desperate circumstances. The costs of the Marshall Plan should be viewed as essential to national security. Marshall told Congress “This program should be viewed as an investment in peace. In those terms, the cost is low.”

Congress approved the Marshall Plan in April 1948, allowing for the ships to set sail for Europe.

But as an AP news story pointed out months before, mini Marshall Plans were already underway long before the first vessel left the Texas port. While Congress was debating the Marshall Plan, charities were working wonders in Europe, including Catholic Relief Services. (then known as War Relief Services).

Founded in 1943, Catholic Relief Services (CRS) was providing food and education to refugees. The AP story highlighted their initiative giving food, clothing, books and school supplies for students at the University for Baltic Displaced Persons and Maltese University in Vienna. It was an outreach of the US Catholic Community, to take action to help anyone who was suffering regardless of what nationality or faith.

One of the biggest acts by CRS took place at a critical time in the formation of the Marshall Plan. After Marshall first proposed his European recovery idea in June 1947, things took a turn for the worse. Drought struck Europe. With farmers unable to grow enough crops, food became the most urgent priority for the continent.

The prospect of a winter with hunger would doom any chance of Europe's recovery. So the autumn of 1947 became a crucial time for America to come to rescue with food. So urgent was this situation President Harry Truman addressed the nation numerous times on the hunger emergency.

Americans were ready to take action. One of the big sources was a nationwide Thanksgiving food drive by CRS.

Every Catholic Church across the country was open for people to drop of food and money that holiday week. As the Cincinnati Enquirer editorialized “The need abroad never was as great as it is this winter…. [T]here is no better way to give thanks for the good fortune we enjoy in America than the Thanksgiving food collection this week.”

The donations started flowing under the theme “Give Thanks by Giving.” In Hartford, Connecticut the St. Thomas the Apostle Church was thrilled to report on the first day their parish had collected over 12,000 cans of milk, soup and vegetables. The Home Economics Club of Mount St. Joseph University in Ohio held a food collection before their Thanksgiving break. Generous scenes like these were repeated across the country.

The food was shipped over to Europe to fight the hunger that threatened to engulf many nations, and provided a building block for peace.

We once again need this kind of massive peace effort. For there are more hungry and displaced persons than at any time since the WWII era.

Sean Callahan, the president of CRS, recently told Congress "violence and protracted conflicts around the globe have cost millions of lives and left hundreds of millions of people to rebuild their lives amidst destruction and torn social fabrics." CRS and other relief agencies have developed even more efficient ways to reach those in need including monetary assistance to support markets and bring stability to communities in crisis.

This is why American support for programs like Food for Peace is needed now more than ever. Whether it’s Congress increasing food aid budgets, crafting the new Farm Bill, or your own church starting a fundraiser (a mini Marshall Plan) it all can make the difference.

History shows this. When George Marshall accepted the Nobel Peace Prize in 1953 he emphasized “a spiritual regeneration which would reestablish a feeling of good faith among men generally.” That is what CRS continues to do today in the midst of ongoing tragedies like the civil war in South Sudan or the conflicts in the Middle East.

We can all make a difference in today’s troubled world, if we have the heart and spirit to win the peace.