William Lambers is an author who partnered with the UN World Food Program on the book "Ending World Hunger." His writings have been published by the NY Times, Huff Post, The Hill, Columbus Dispatch, Cincinnati Enquirer and many other media outlets. 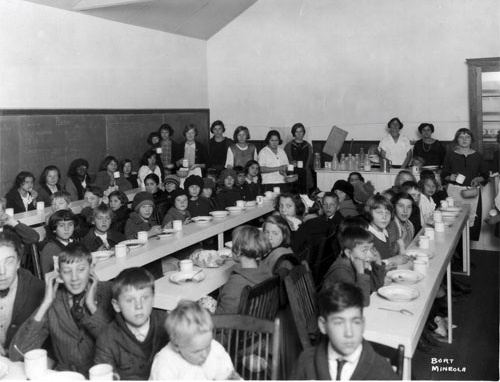 National School Lunch week is here (October 15-19), a time for shining the spotlight on this essential program that feeds hungry children.

For just a moment, let’s take a step back in time to see what President Harry Truman and the United States Army were doing about school lunches in the fall of 1946.

“The well-nourished school child is a better student. He is healthier and more alert. He is developing good food habits which will benefit him for the rest of his life” explained the President.

Truman sought to spread the initiative as far as possible. This was vital for the health of children, and of the nation.

President Truman proclaimed “The school lunch program provides a cooperative means of assuring adequate nutrition for millions of our children who otherwise might be denied this basic need.”

But Truman also cautioned that more needed to be done. Hunger is relentless.  We must keep advancing school feeding. Truman said “This is a splendid start, but we must look forward to the day when the lunches are available in every community in every State and territory.”

Our National School Lunch Program has been expanded in the decades since Truman. Thirty million children depend on these meals during the school year today. But the fight against child hunger is not over.

We need more weekend and summer feeding programs for kids. These are the times when impoverished children don’t have access to the free lunches because school is closed.

Hunger never takes a day off. So we must fight hunger year round. In 1946, President Truman was doing so. The United States Army was too.

The Second World War had just ended and U.S. forces were occupying part of Austria after the defeat of Nazi Germany.

Child hunger was a crisis, particularly in the capital city of Vienna.  Hunger is always the aftermath of war.

The Army sprang to action. Food supplies from U.S. forces grew the school lunch program in Vienna in September, 1946 to a record 125,000 children. This was a 12 percent increase from the year before!  In Land Salzburg and Land Upper Austria the Army also restarted school feeding with the help of Catholic Relief Services, a charity founded during World War II.

Army supplies also provided malnourished infants a daily milk punch in Vienna. This food was so important to save children from potentially deadly malnutrition.

Two school lunch programs making a difference in the United States and far away in Austria.

School lunches don’t often get headlines. But they do change the world. They made the United States a stronger country. They saved nations in the aftermath of World War II including Germany, Italy and Japan.

Catholic Relief Services is partnering with the UN World Food Program (WFP) giving school meals to children in conflict-torn South Sudan. The WFP provides school feeding in Syria to help children who have suffered during the seven year civil war.

These school meals depend on the generosity of donors.

If every child in the world could receive school meals, we could lift an entire generation with nutrition and education. At home we can do this through the school lunch and breakfast program, weekend and summer feeding.

Overseas the McGovern-Dole global school lunch program, named after former senators George McGovern and Bob Dole, can feed school children in developing countries. This depends if Congress provides enough funding and has the imagination to expand it to reach more children.

We can be the generation that ends hunger and poverty, and it starts with a school meal.