We’ve Helped Starving People Before. We Need to Do It Now.

William Lambers is an author who partnered with the UN World Food Program and Catholic Relief Services on the book Ending World Hunger. His writings have been published by the NY Times, History News Network, The Hill, Newsweek and many other news outlets. 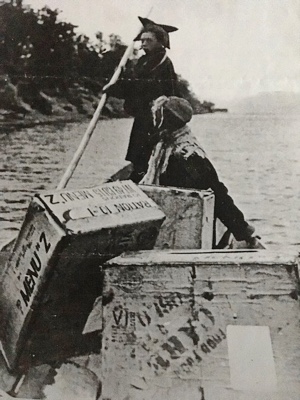 Christmas is when we hope and pray for miracles, big and small.  In late 1944, the people of Finnmark in Northern Norway needed a holiday miracle in the worst way.

Finnmark had been burned to the ground by the retreating Nazi German army as World War II raged. The News of Norway reported that "the population was brought literally to the point of starvation, and lack of housing, adequate clothing and other commodities caused considerable sickness, particularly among children."

Help would come from the Allied forces and charities. General Andrew Thorne of the Scottish Command said the Allies would "render all assistance" for the relief of Finnmark. U.S. Colonel Boyd, who according to an Allied document, traveled on December 6 to Kirkenes, Norway with "urgently needed civil affairs medical supplies."

Journalists Olav Rytter and Jorgen Juve visited Finnmark that December to survey the destruction. The arrival of humanitarian aid brought hope and small miracles including a Christmas party in one town.

The News of Norwayprinted, “The kids drank milk and consumed cookies to their hearts’ content, danced around the Christmas tree and played games almost like in peacetime.”

Charities, including American Relief for Norway, sent food packages and clothing to Finnmark.

Juve recounted seeing a child near the Tana River who was so excited to get a new blue coat. Her name was Liv. She reached in her coat and pulled out a note that read “R. Minneapolis.” She said, “Now, I am dressed for the winter.

Help would be needed for years to come for Finnmark to recover. That is where many more miracles occurred with the help of charity. CARE food packages were sent to Finnmark. The Save the Children federation launched programs where people could adopt a school to rebuild the classrooms and provide school lunches.

As this new year approaches we need many more miracles, especially for children. The US Famine Warning system just sent out an alert stating "Across 46 countries, 83 million people require emergency food assistance in 2019, 75% more than in 2015."

War and hunger is escalating rapidly around the globe. Conflicts in South Sudan, Yemen, Syria, and the Sahel of Africa are among the many tragedies causing displacement and food shortages.

We have not seen such widespread suffering from conflict since World War II.

Relief agencies including the World Food Program, Save the Children, UNICEF, Mercy Corps, Norwegian Refugee Council and others need our help as they try to bring relief to the suffering.  You can help them provide food and other supplies to war victims.

The U.S. Food for Peace and McGovern-Dole school lunch program need more funding. Catholic Relief Services, with McGovern-Dole funding, is providing school lunches in war-torn Mali, We need to ensure these meals are continued and expanded.

We can provide humanitarian aid to relieve suffering, but the international community must also bring an end to conflicts that cause food shortages.

The world needs more peace treaties. On Christmas Eve night in 1814 there was a treaty signed ending The War of 1812 between Great Britain and the United States. It led to more peace agreements including the Rush-Bagot pact of 1817 that disarmed the Great Lakes and Lake Champlain. It helped build the peaceful border between the U.S. and Canada.

Yemen desperately needs its own peace treaty this Christmas to end the civil war which has left 20 million people needing life-saving food aid. South Sudan likewise needs to build peace treaties and agriculture so their people can live free from hunger and fear.

This holiday think of ways you can help those left hungry and homeless by war. Your actions create the miracles to those who need it most.