Saving Lives in the Crimean War: “They Are My Sons” 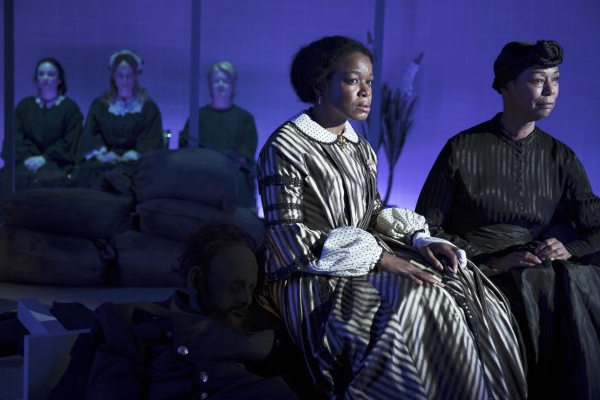 Mary Seacole was a Creole, born in Jamaica to a Jamaican woman who had married a Scottish soldier. Her mother, a nurse, ran a boarding house for invalid soldiers there. Mary lived in Jamaica until she was 39 and then, widowed, traveled to Panama, where she opened up a hotel. She developed numerous medical skills over the years and when the Crimean War broke out in 1853, raced to England in an attempt to join Florence Nightingale and her cadre of 39 nurses to care for the wounded British troops in the war.

She was rejected by Nightingale (Mary said it was because she was black) and then, with a friend she traveled to Crimea and set up a small hotel/hospital behind the battle lines at Balaclava and went to work as a nurse, caring for the soldiers, who appreciated everything she did for them. She also risked her life treating soldiers on the battlefield. A British journalist covered her and she became famous all over the world.

Her story is told well, and with a considerable amount of emotion, by Jackie Sibblies Drury in the play Marys Seacole, that opened recently at Lincoln Center’s Claire Tow Theater, in New York.

You realize before you sit down and stare at the very contemporary set of a hospital waiting room that this is a very unusual play. It is a hard-hitting drama that hammers away at your senses, full of vivid skits and scenes. Characters hurtle back and forth through time between Jamaica of 2019 and Crimea of the late 1850s. It depicts Mary’s life, and her struggle in the war, very well and tells yet another true story of a brave woman in history.

The hospital set is used as a theater in itself in this story of Jamaica in the 1840s and Crimea in the 1850s. Added on to the war story are numerous contemporary events, such as a dress rehearsal for a mas shooting exercise, Mary’s disputes with her dead mother’s ghost and the anguish of a pregnant woman. The last half of the play is in 1850s Crimea and Mary’s heroism there and more visits from her mom. If you pay careful attention to the rather chaotic plot, it all makes surreal sense, but if you don’t pay attention you can get a bit lost.

Director Lileana Blain-Cruz does a fine job of telling the 1853 tale and the contemporary story at the same time. She also is skilled at keeping the pace of the play moving along at a brisk speed even though she works hard, with her actresses in this all female play to build deep, rich characters slowly.

She gets good work from Quincy Tyler Bernstine as a wonderful Mary, who is a tornado of emotions at times. The director also gets superlative work from Karen Kandel as Duppy Mary, her mom’s ghost. Others in the talented ensemble cast include Gabby Beans as Mamie, Lucy Taylor as May, Marceline Hugot as Merry and Ismenia Mendes as Miriam.

There is a point, about two thirds through the play, when the ensemble goes through a torrent of activity, people running madly across the stage, arguing and defending themselves. There is, well, a lot of high-pitched screaming. Fans of Super Bowl winners have not screamed this loud. It is a magical moment.

Lincoln Center has printed a short history of Mary’s life (the Marys in the title refers to the different Marys in the story) that is slid into the program so that you know her history and that of the world in the 1850s. It is helpful.

A problem with the play is that you learn absolutely nothing about the Crimean War. You don’t even learn who won the conflict (Alfred Lord Tennyson’s immortal poem ‘The Charge of the Light Brigade” was written about that war).

The war, that lasted until 1856, was started over the rights of Christian visitors to the Holy land, at the time part of the Ottoman empire. It pitted Russia against the Ottomans, France, the British and Sardinia. Russia lost. A play about a nurse in the Crimean war must have more information on the war. It should also tell more about Mary’s life as a nurse there, especially her visits to the battlefield while gunfire was exchanged. People do not know much about that war, and more information om stage would be valuable.

The play also starts slowly, mopes for a while and has too many people with clipped Jamaican accents. These are just minor complaints, though.  After about half an hour the magic of the playwright and director take hold and Marys Seacole soars.