Racists in Congress fought statehood for Hawaii, but lost that battle 60 years ago

Sarah Miller Davenport is a Lecturer in 20th Century US History at the University of Sheffield.

But Hawaii was not an ordinary United States territory and would be unlike any other American state.

For one, Hawaii was not actually in America, at least not physically. Its islands lay in the Pacific, some 2,000 miles from the U.S. west coast.

And Hawaii would become the first state with a majority of people of Asian descent. Many had been ineligible for U.S. citizenship only a few years earlier, before the end of racial restrictions to naturalization.

These two defining characteristics – of Hawaii’s geography and demography – had led Congress to dismiss earlier bids for statehood before World War II. Hawaii was too far away and too Asian to be joined with the continental United States.

Hawaii was annexed as a U.S. territory in 1898. That was five years after white settlers in the islands overthrew the Hawaiian monarchy to establish an American-led government.

Americans had first arrived as missionaries in 1820, and stayed on to establish sugar and pineapple plantations throughout the islands. A shortage of Hawaiian labor led them to seek workers from Asia – first China and later Japan and the Philippines. 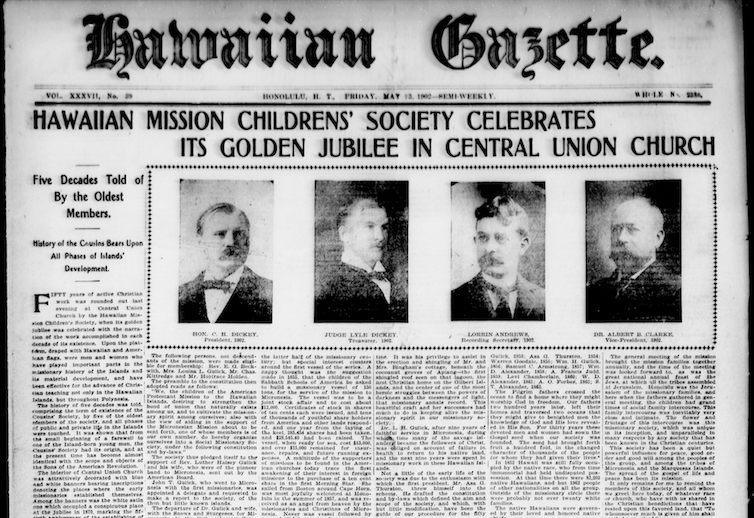 Beginning in the mid-19th century, Hawaii became a major conduit for Asian migration to the American mainland, where anti-Asian racism led to a series of immigration exclusion acts. The first of these was the Chinese Exclusion Act of 1882, which eventually led to the near-total restriction of Asian migration in the 1924 Johnson-Reed Act.

Throughout this period, the American settlers who dominated Hawaii’s economy and governance were happy with the territorial status quo. They had carved out a comfortable enclave of wealth and influence, from which they ruled over a racialized working class. Any increased power that statehood might confer on Native Hawaiians and Asians would necessarily undermine white supremacy in the islands.

But the Sugar Act of 1934, which set quotas on Hawaii sugar exports to the continental U.S., changed the calculus of the territory’s white leaders, who now saw the advantage of being a fully equal U.S. state with federal representation. They launched an organized push for statehood.

By 1937, however, the statehood campaign had stalled on the back of a congressional investigation that called into question the loyalty of the islands’ Japanese population, Hawaii’s largest ethnic group.

According to one statehood opponent, the very idea of statehood was “preposterous,” since people of Japanese descent in Hawaii held allegiance to Japan, “which they could not disavow if they would, and would not if they could.”

Not surprisingly, Japan’s bombing of Pearl Harbor appeared to put statehood even further out of reach. For most of the war, the islands were subject to martial law. There was no mass internment of Hawaii’s Japanese population as in the continental U.S. To do so in Hawaii would have been logistically and economically infeasible given the numbers. But martial law imposed particular burdens on people of Japanese ancestry and severely limited political activity in the islands.

After World War II, statehood advocates in Hawaii regrouped, with a new Hawaii Statehood Commission acting as an official arm of the territorial legislature.

Fears of Japanese disloyalty had faded. Japan was now a U.S. ally and popular stories of the heroism of Japanese-Americans soldiers in Europe papered over the wartime anti-Japanese racism that had justified internment.

But the forces of segregation and racism in Congress effectively derailed statehood for more than a decade. It was not until 1959 that a bill finally passed both houses. 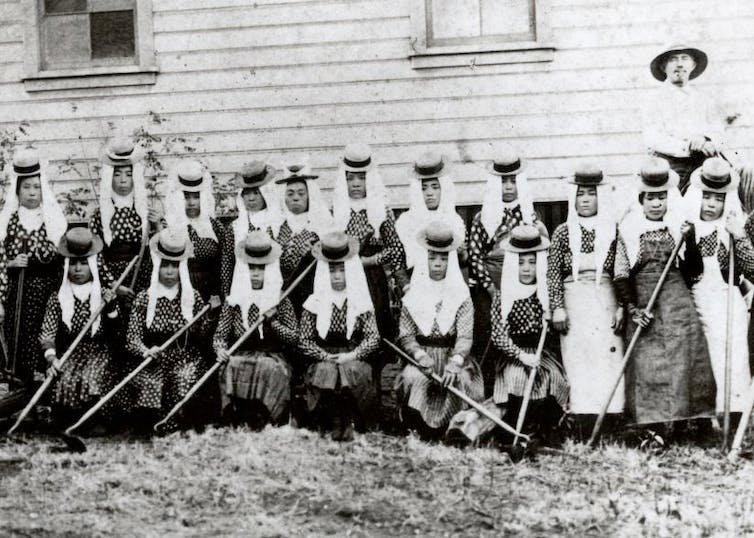 The base of opposition to statehood in Congress was Southern Democrats. To them, Hawaii was a dangerous portent of an interracial future.

Segregationists also worried that Hawaii statehood would mean an end to Jim Crow, the systematic, legal enshrinement of racist policies in the South. Texas Rep. W.R. Poage suggested that the proposal for Hawaii statehood might result in “two more votes in the Senate” for civil rights.

From rejection to embrace

How, then, do we account for the dramatic shift in Hawaii’s fortunes, from racist exclusion to full legal inclusion in the nation? The answer lies in the intersection of global decolonization, the Cold War and the end of legal segregation in the U.S.

The Cold War, which followed World War II, was in part a struggle between the U.S. and the Soviet Union for the allegiance of the “Third World.” 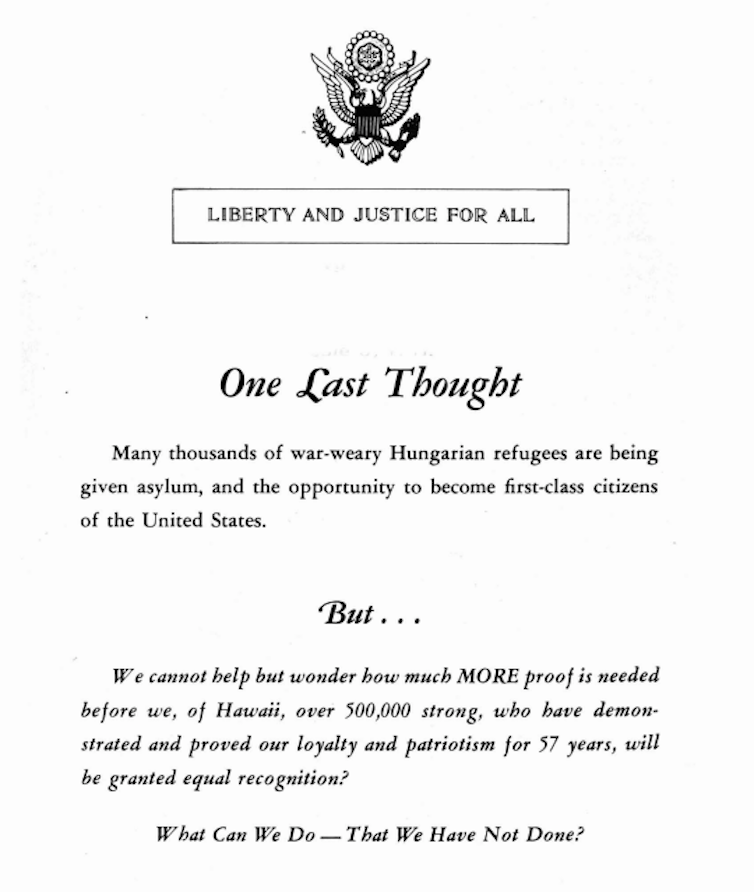 From a 1957 booklet by the Hawaii Statehood Commission, titled ‘Hawaii USA, Communist Beachhead or Showcase for Americanism.’               University of Hawaii

One tactic the Soviets used in that battle was to call attention to segregation and racism in the U.S. By doing that, the Soviets had identified America’s “Achilles’ heel,” in the words of Dean Acheson, President Harry Truman’s secretary of state.

Hawaii statehood advocates claimed that the new state would convince people in the decolonizing nations of Asia that the U.S. was committed to both racial equality and self-governance.

Mike Masaoka, representing the Japanese American Citizen League, argued that Hawaii’s racial composition was “one of the most potent arguments” for statehood. “To the millions of dark-skinned people” around the world, America’s denial of statehood to Hawaii was proof of the claims of “Communist hatemongers” that the U.S. was racist and anti-democratic.

By the mid-1950s, Hawaii, as America’s western frontier and host to the U.S. Pacific Command, was gaining new strategic and symbolic importance as the Cold War in Asia heated up.

American foreign policy had focused primarily on Europe in the 1940s, but by the next decade it was Asia that most worried the foreign policy establishment. The communist victory in China in 1949, North Korea’s breach of the South Korean border a year later, and the push for decolonization in Southeast Asia combined to draw American attention to the Pacific.

Katsuro Miho, a member of the Hawaii Statehood Commission, warned Congress that Asian nationalist leaders were scrutinizing the statehood debates. According to Miho, Mohammed Roem, the former vice prime minister of Indonesia, had told the Hawaii legislature that Indonesians “were watching to see if the United States will grant statehood to ‘racially tolerant Hawaii.’” 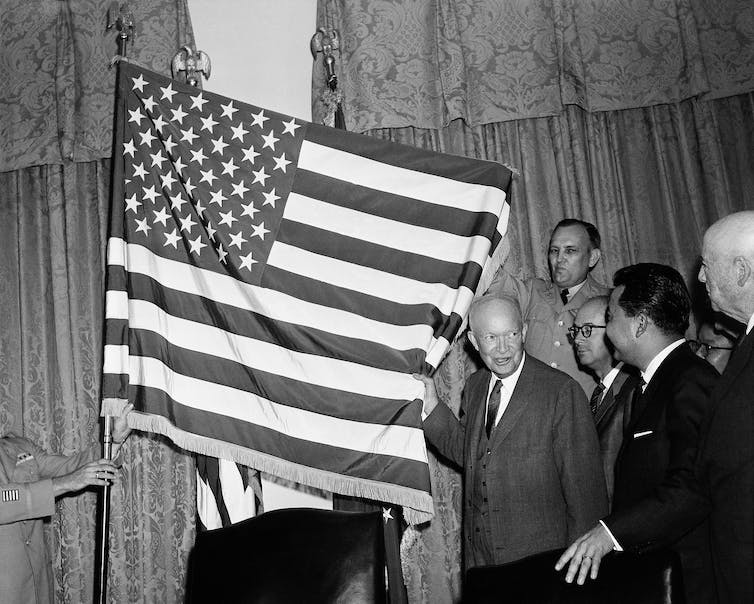 Statehood advocates won the argument by emphasizing Hawaii’s cultural and geographic distance from the rest of the U.S. – the very obstacles to statehood before World War II.

Now, in the context of the Cold War, Hawaii could be America’s “bridge to Asia.”

In urging Congress to vote for statehood in early 1959, Fred Seaton, Eisenhower’s secretary of the interior, celebrated Hawaii’s connection to Asia as useful to American foreign policy.

Hawaii, he said, “is the picture window of the Pacific through which the peoples of the East look into our American front room.” This was vital to “future dealings with the peoples of Asia,” because most of Hawaii’s people were “of oriental or Polynesian racial extraction.”

After statehood, policymakers in Hawaii and on the mainland sought to solidify the new state’s role as bridge to Asia by establishing a series of educational cultural exchange initiatives aimed at fostering “mutual understanding” between Americans and Asians.

Yet the language of connection that gave meaning to Hawaii statehood also served to distort the relationship between Asia and the U.S., particularly as Hawaii became a staging ground for various American military interventions in Vietnam and elsewhere. A bridge can link peoples and cultures, but it can also carry tanks.

Sarah Miller Davenport is the author of:

Princeton University Press provides funding as a member of The Conversation US.