Patrick Lacroix completed his Ph.D. dissertation, “John F. Kennedy and the Politics of Faith, 1960-1963,” at the University of New Hampshire in 2017. He currently teaches at Phillips Exeter Academy (Exeter, N.H.). 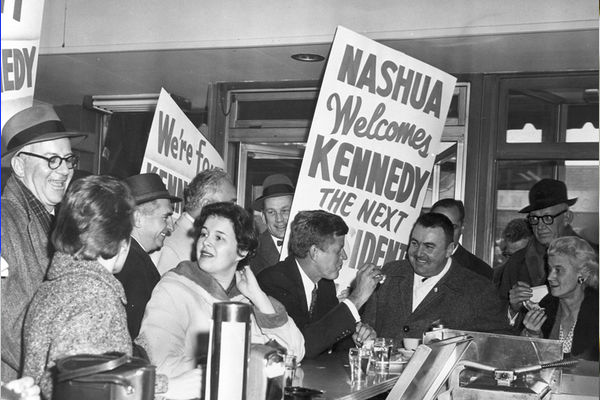 In the last sixty years, the Granite State’s first-in-the-nation primary has crushed the ambitions of many a presidential hopeful—including incumbent presidents. The nearly two dozen Democratic candidates now descending on New Hampshire understand this all too well.

The state did not become a force in national politics simply because it is the first presidential primary. It was made by presidential candidates who could only glean victory by challenging backroom politics and party bosses. Instead of courting likely state delegates to party conventions, outsiders sought the support of rank-and-file members. As a result, in the 1950s, the blessing of New Hampshire voters began to hold disproportionate sway in nominating races. The national media took note and the “popularity contest” (more than delegate commitments) became the mark of success in other states as well. Ever since, candidates have followed in the footsteps of Dwight Eisenhower, Estes Kefauver, and John F. Kennedy.

The presidential campaign of 1952 established the importance of primary to the fate of the election ahead. That year, two outsiders made a stir in New Hampshire through the increasing role of television and celebrity.

On the Democratic side, it seemed unlikely that President Truman would be displaced at the top of the ticket. Senator Estes Kefauver (D-TN) managed to do the unthinkable. Kefauver had entered Americans’ living rooms with televised hearings on organized crime and quickly capitalized on name recognition. In a situation that anticipated Eugene McCarthy’s 1968 strong challenge to President Lyndon Johnson, Kefauver entered the New Hampshire primary and finished ahead of Truman by 4,000 votes. Truman bowed out of the presidential campaign shortly thereafter. Although Illinois governor Adlai Stevenson ultimately won the Democratic nomination, Kefauver’s bid had enabled party members to express themselves and underscored the power of a strong showing in New Hampshire.

The Republican primary race was marked with even greater excitement. Ohio Senator Robert Taft, “Mr. Republican,” hoped to bring his party to the White House for the first time in two decades. As the front-runner, he might have scored a run-away victory had one name been kept off of the ballot—General Dwight Eisenhower.

Ike was still in Europe and was not campaigning. In fact, he was not a declared candidate. But New Hampshire Governor Sherman Adams helped to enter Ike’s name on the ballot. Ike prevailed with his own kind of celebrity—a victorious general who was standing up to Soviet threats. Taft’s campaign then collapsed in other states and, after several weeks, Eisenhower filled the vacuum and formally entered the race. In November he defeated Stevenson.

Four years later, American voters were treated to a rematch, but the New Hampshire campaign proved to be less dramatic. Primary voters of both parties chose convention delegates, but there was no race in the “popularity contest” indicating preferences for the presidential nomination. Eisenhower sought reelection. Kefauver again crisscrossed New Hampshire and handily won the primary. Playing an older game, Stevenson overlooked the state but amassed the most delegates on his way to victory at the Democratic convention in Chicago. Kefauver landed the vice presidential slot as consolation, beating out a rising star from Massachusetts.

While name recognition had played a big part in the primary campaigns of 1952 and 1956, the prospect of serious battles for the votes of Granite Staters increasingly led candidates to tap into the state’s party organizations. This was especially true for Democrats, whose party had spent years in the political wilderness of New Hampshire. This was still a predominantly Catholic institution split between French and Irish, with little structure outside of cities like Manchester and Nashua. The GOP consistently outmaneuvered the party. Any Democratic hopeful willing to tend to the hard work of restructuring the party and extending its base in New Hampshire might gain a definitive advantage over rivals for the nomination.

The first candidate to do so was John F. Kennedy, who found a close ally in Mayor Bernard Boutin of Laconia. Boutin had travelled across the state by Kefauver’s side in 1956. Soon thereafter, thinking of the next presidential contest, Kennedy reached out to him and won his support. In 1958, Boutin won the Democratic gubernatorial nomination and began to reform the party. He inspired a new sense of confidence among New Hampshire Democrats and helped to build a party organization that would have the means and desire to support Kennedy in 1960.

Boutin helped to revive the party and to make it a viable political option again. So too would Kennedy, in 1960, simply by visiting places long written off to the GOP and by assuring voters that the convention would hear their voices. Ultimately, the two men’s efforts facilitated the rise of Senator Thomas McIntyre, three-term governor John King, and Representative J. Oliva Huot in the decade that followed.

Kennedy and Boutin discussed “the very bad experience that others had had in New Hampshire, it being more a spoiler in presidential primaries than a builder.” They were no doubt thinking of Truman and Taft. But they also needed to avoid a quixotic campaign like Kefauver’s.

Kennedy had no major rival in the New Hampshire “popularity contest.” But he sent a clear message to party bosses and voters alike two months before the vote, when he declared, “It is incumbent on those who seek the Democratic nomination for President to be willing to submit their names in the primaries . . . The days when presidential candidates—unknown and untested—can be nominated in smoke-filled rooms, by political leaders and party bosses, have forever passed from the scene.” He also responded to Truman’s view that the primaries were but “eye-wash.”

Kennedy was not entirely an innovator, however: he brought the same personal touch that had paid off for his fellow senator in 1956. The Boston Globe reported that he “campaigned Kefauver-style, greeting people along the streets of the two biggest cities, exchanging handshakes, giving autographs, dropping into a luncheonette for coffee, stopping at a courthouse, fire station, talking at factory gates and touring mills.”

Kennedy travelled the state and earned the endorsement of long-time Manchester mayor Josaphat Benoit. The interest and enthusiasm raised by his campaign more than compensated for the hostility of the Democratic old guard. This also became a family affair. His mother Rose visited the state; brother Edward “brought the house down” when speaking French in Suncook. Kennedy drew larger crowds than Kefauver ever had. The organizational support he received enabled his campaign to spend relatively little on the race.

This multifaceted strategy paid off. Kefauver had polled some 22,000 votes in 1956; Kennedy won 46,000. In the process he overcame the fear of many New Hampshire Catholics that the national political stage might not be ready for someone of their faith. We can only surmise how large a part New Hampshire had in making Kennedy a successful presidential candidate—in regard to his campaign style, his message, and his understanding of issues near and dear to voters.

Like Kennedy, Vice President Richard Nixon faced little opposition in the first primary. That did not diminish its overall importance. The two winners eventually became their parties’ nominees, serving the state’s cause as an inescapable stop for any presidential candidate.

As Bernard Boutin later remarked, “If [Kennedy] hadn’t done well in New Hampshire, I think that the West Virginia victory and the victory in Wisconsin would have been impossible.”

Since then, New Hampshire has regularly shaped nominating races—from Eugene McCarthy’s grassroots campaign to Ed Muskie’s alleged tears, from the debate financed by Ronald Reagan to Pat Buchanan’s challenge to another sitting president.

But, as we are now seeing, the primary has been constant in the style of campaigning it demands and in perceptions of its significance. Those factors, as important as its first-in-the-nation role, resulted from a relatively brief period in U.S. political history—and from the efforts of three men whose hopes hung on the support of Granite Staters.