William Lambers is the author of Nuclear Weapons, the Road to Peace, and Ending World Hunger. His writings have been published by the USA Today, NY Times, The Hill, Newsweek and many other outlets. 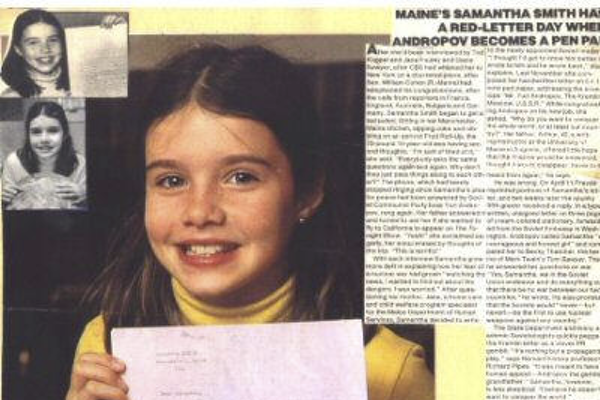 Growing up in Massachusetts, during the Carter and Reagan presidencies, I was one of many little kids worried about nuclear war. We knew about the horror of nuclear weapons from the atomic bombs dropped on Hiroshima and Nagasaki in August, 1945 ending World War 2.

Both America and the Soviet Union were testing a lot of nukes to which I told my family "there was no need to test nuclear weapons because if you fire a nuclear missile at a coffee cup, obviously the cup will break."  The Cold War arms race continued nonetheless.

In Maine 10-year old Samantha Smith was also deeply concerned about nuclear war. Her mother encouraged her to write to the Soviet leader Yuri Andropov in 1982. She did, in a personal hand written letter, telling Mr. Andropov  "I have been worrying about Russia and the United States getting into a nuclear war. Are you going to vote to have a war or not?.....God made the world for us to share and take care of. Not to fight over or have one group of people own it all. Please lets do what he wanted and have everybody be happy too."

Off in the mail Samantha's letter went, probably not expecting a reply. But then months later Samantha got the surprise of her life.

Samantha's letter was printed in the Soviet newspaper Pravda. Then she got a personal reply from Andropov himself, inviting her to the Soviet Union! The next thing you know Samantha was on TV too, talking about what she wanted most of all: peace.

Samantha Smith toured the Soviet Union in July of 1983, meeting Russian kids, and became an ambassador for peace and nuclear disarmament. She believed people of rival nations could get along and did not want war. Samantha also visited Japan to reinforce their desire to eliminate the nuclear weapons which they had suffered in the atomic bombings on Hiroshima and Nagasaki.

Samantha tragically lost her life in a plane crash in 1985. I remember hearing about the shocking news. Samantha’s spirit has never been forgotten.

This is so important because there is a complacency that has set in when it comes to nuclear weapons.  Right now leaders are dragging their feet in reducing the nuclear threat.  There are still about 14,000 nuclear weapons in the world according to the Arms Control Association. The U.S. and Russia have about 90 percent of the nukes.

Shouldn't we all be worried about them today, too? There is still the risk of nuclear war, accidental launch or nuclear terrorism. How long do we want to live with this danger?

Billions of dollars are poured into nuclear weapons each year. Wouldn’t we rather spend this money on fighting hunger, poverty, disease and climate change?

The Move the Nuclear Weapons Money Campaign wants to end nuke spending and use it toward the benefit of humanity. The danger of nuclear weapons is shared by every person, every country. Everyone can take part in this goal of nuclear disarmament, much like Samantha encouraged.

I see examples of this idealism today when working with the CTBTO youth group, who passion is to achieve the Comprehensive Nuclear Test Ban Treaty. This treaty would end nuclear testing forever, helping pave the road for elimination of all nukes.

Samantha Smith taught us your voice matters and you can make a difference in ridding the world of nuclear weapons and achieving peace for all.