Cathal J. Nolan teaches military history at Boston University, where he is Director of the International History Institute. The Allure of Battle: A History of How Wars have been Won and Lost (Oxford University Press, 2017) was awarded the Gilder Lehrman Prize in Military History (2018). It was also named by War on the Rocks as its first ever Distinguished Book (2019). 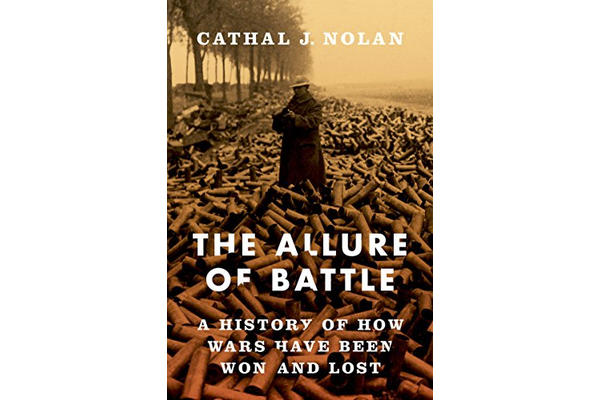 Most military histories focus on major battles as the fulcrum moments that shape victory and defeat in war, suggesting that decisive victory in battle also delivers a quick and decisive victory in war. Modern military theory, too, zooms in on the battlefield commander, looking to distill the skill and wisdom of the so-called genius general. At least since the early 19th century, military history and theory have both pointed to superior generals like Frederick or Napoleon and said: “Emulate them, seek to win decisive battles as they did,and you will win at war.”

But this narrative of war is wrong. In fact, from at least the 17th century, most wars fought among major powers were not won and lost in a decisive battle led by genius generals directing tactical movements. They were long contests of endurance of fire and starvation, of marching armies ravaging the countryside, of months’ and even years’ long sieges of towns and cities. Even if there are geniuses present at a battle, war is too complex for even genius to control. Historian’s claims, general’s plans, statesmen’s desires to win fast wars by decisive battle, by Napoleonic or Clausewitzian “genius,” mostly distance our understanding from real war’s immense complexity and contingency, which are its greater and more fundamental truths.

Instead of wars decided quickly in sharp, decisive battles, most often wars bogged down over years or decades, in some cases lasting more than a century. The result of these protracted wars was also far less than decisive. Long wars brought clouded results, neither full triumph nor final defeat. They were arenas of grey outcomes where lack of resolution meant they happened all over again, as irresolution encouraged a new war and war beget more and wider war. Nations and empires fought to force some great decision on an enemy but fell short, paused to recover and rearm, then fought all over again. And again and again. Exhaustion of morale and matériel rather than finality through battles, which mostly just accelerated attrition, marked the course of many modern wars, and almost always of the largest wars among the major powers in any era.

And so, history endured multi-generation conflicts that historians latter gave names like the Hundred Years' War; the Thirty Years' War; the Wars of Unification in Japan; and the long sequence of Anglo-French wars taking many names, but all linked by a struggle for primacy lasting from the 1690s to 1815. More recent wars of attrition by proxy waged in Indochina lasted from 1940 to 1992, while linked wars of the Arab-Israeli conflict are in its eight decade. Other protracted conflicts now decades long smolder in Myanmar, Kashmir, Sudan and Congo. There are ongoing wars of attrition in Afghanistan that started in the 1970s, in Iraq that started in 1991, and a dozen more locales where attrition and irresolution rather than generalship and decisive battle is the tragic, abiding and brutal reality.

Generals may win battles but they hardly ever win wars, for there really is no such thing as genius in modern war. We should stop using the word, unless we count bureaucratic, moral and social mobilization of whole peoples and empires for long war as the form modern military genius takes. If we fixate, as traditional military history does, on tactics and battles we miss the deeper story of how victory in war is achieved, or to ask if it can be achieved. We miss more basic causation of social organization, moral commitment, hard logistics, industrial capacity, long war management, and strategies of attrition that matter more than any battle. Modern wars are not usually won with decisive battles or lightening campaigns by the aggressors that start them, but by strategic depth on defense; by a capacity to absorb initial losses but stay in the war to win in the end by grinding rather than by genius.

Napoleon was certainly the greatest of the horse-and-musket generals, but it is far more important that he was also the last. And that he never understood that winning a day of battle is not enough. You have to win the campaign, then the year, then the decade. Victory must usher in political permanence. He thought his talent was enough, so he only looked to win the next battle or at most the next campaign. He lost it all because he never understood attrition in Spain, and was outthought and outfought in Russia in 1812, then in Germany and France in 1813-1814. His enemies refused to accept that defeat in a given battle meant defeat in the long war with France. They came at him over and over in wearing campaigns of attrition. Britain hardly fought a big battle, but it was lynchpin of the coalition that won the war. Waterloo was not the moment of Napoleon’s decisive defeat, which came a year earlier. It was a tragic anticlimax. Even had he won the battle, much larger Allied armies were already headed to France to ensure that he lost the war, again. And yet, store shelves groan under the weight of too many books on Waterloo.

Winning at war is far harder than winning a battle. It takes far longer than those who launch the opening battles plan or hope. Cannae, Agincourt, Austerlitz, Tannenberg, Kiev, these names recall sharp images of grand victory and defeat. Yet, winning such lopsided battles did not ensure victory in war. Hannibal won at Cannae, Henry V won at Agincourt, Napoleon won at Austerlitz, the Kaiserheer won at Tannenberg; Hitler won at Kiev. Then Carthage lost to Rome, England lost to France, Napoleon lost to the Grand Alliance, Imperial Germany lost to the Allies,  and Hitler lost it all, utterly and catastrophically, in a war of mass attrition unequalled in history. In each case, short war delusion and the allure of battle met hard attrition and long war reality.

There were exceptions. Some battles were singular and decisive. Gustavus won at Breitenfield in 1632, thereby ensuring the Thirty Years' War lasted another 16 years and ended in confessional stalemate. Helmut von Moltke won at Königgrätz and Sedan, baleful victories that did so much damage to German military thinking and diplomacy that the whole German officer corps and political class ignored and dismissed him when he warned that his quick wars could not be replicated. So his successors tried again, and failed in the face of French defensive victory at the Marne in 1914, thereby blundering into a long and losing war of attrition after that. Germans gambled on short war a second time in Poland in 1939 and succeeded, but only against a minor power. They rolled the iron dice of war again in 1940, and were more lucky than good in France. They rolled them again in 1941 toward Russia, and got what they deserved.

The biggest modern wars started from short-war delusion before turning into wars of exhaustion, expanding in destruction and tragedy as the opening vanity of elites was supplanted by the aroused vanity of nations and empires. The largest wars were won not by a great battle or even a series of battles, but by weight of matériel joined to moral capacity to endure terrible losses, suffer early defeats yet stay in the fight, endure horrendous losses yet survive and commit to fight again, and again and again. We write and we teach that attrition is vulgar and without redemptive heroism (as if faster slaughter in battle is morally superior). We fear to find only indecision and tragedy without uplift in trench mud or roll calls of dead accumulating over years of effort and endurance. But we should look straight at the grim reality that battles for the most part accelerate attrition, which is more basic to the final result; and that victory is achieved more often by extended mass slaughter, not by national character or soldier heroics or by genius.

Instead, historians (and politicians and pop culture manufacturers) raise battle to summits of heroism and generals (and admirals) to levels of genius that real history cannot support. Too much traditional and popular military history celebrates even failed battles as filled with glory, if they are lost by praiseworthy genius. Prussia is wrecked yet Frederick is the greatest of Germans. France is beaten and an age is named for Louis XIV; it’s beaten again, twice, and another age we call Napoleonic. Confederate armies waste away or are crushed, yet Robert E. Lee is the tragic genius of the ‘Lost Cause.’ Europe lies in ruin, and too many historians still say German generals displayed genius with the panzers. Even though by 1945, their Tigers could not move in daylight and literally ran out of gas in the last German offensives of the war.

It is proper for professional officers to seek tactical ways around attrition that might shorten wars. But on a political and moral level, we should beware repeating these clear mistakes of modern military policy and history. We might better accept at the start that attrition is more likely, and have the humility and honesty to explain it to those we send to fight in our name and behalf. Maybe then we would only choose to fight wars we deem worthy of that awful price, and fight fewer of them. Although, I frankly doubt that we are collectively capable of such wisdom.