50 Years ago, the KGB weaponized the fire at Jerusalem’s al-Aqsa mosque to sow discord between Israel and the United States 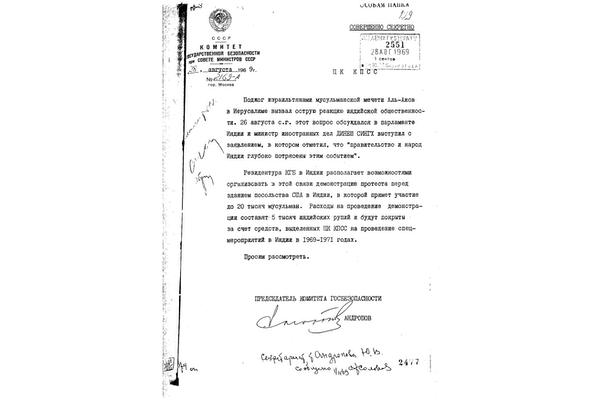 A notorious, murderous intelligence agency of one country finances and organizes a covert operation in another country, ostensibly against a third country but actually targeting a fourth. Such was international intrigue during the Egyptian-Israeli War of Attrition (1969-1970), and the cast of this hot regional drama of the Cold War were the Soviet Union, the United States, India and Israel.

Fifty years ago, on 28 August 1969, KGB Chairman and future Soviet leader Yuri Andropov wrote a memorandum to the Central Committee of the Communist Party. It suggested fomenting agitation in the Moslem world – specifically, in India – following the fire that broke out a few days earlier in Jerusalem’s al-Aqsa mosque. The means was to be a rent-a-crowd demonstration staged and budgeted by the agency, which perceived several advantages in such an operation – primarily fueling Indian resentment again the United States and Israel. But the document is intriguing from many other angles too – from the barefaced lie it builds upon to the timing and purposes of its promulgation.

“The arson by Israelis at the Moslem mosque of Al-Aqsa in Jerusalem,” Andropov wrote, has caused a severe response in the Indian public. On 26 August, this issue was debated in the Indian Parliament, and Foreign Minister Dinesh Singh declared that ‘the Government of India is profoundly shocked by this incident.’ The KGB rezidentura [station] in India has the capability to organize, in this context, a protest demonstration in front of the US Embassy in India, with the participation of up to 20,000 Moslems. The cost of implementing this demonstration would be 5,000 rupees [about $650 at the time] and would be covered from the funds budgeted by the Central Committee of the Communist Party for special operations for 1969-1971. Request evaluation. Andropov.” In the left-hand margin, a handwritten note adds: “To be implemented. [General Secretary Leonid] Brezhnev,” the top Soviet leader.

After the demise of the USSR, the document was presented as evidence in Russian President Boris Yeltsin’s attempt to outlaw the Communist Party. The Constitutional Court rejected his suit, an so it was that the Party leader Gennadi Zyuganov remained a perennial, if unsuccessful, candidate for president. It was at the time of this trial that the document was obtained by Gideon Remez and Dr. Isabella Ginor, now associate fellows of the Hebrew University’s Truman Institute, who included it in the mass of evidence for their recent book The Soviet-Israeli War, 1967-1973 (Hurst/Oxford University Press, 2017).

“Andropov wrote what he and the memo’s recipients knew to be a lie,” Remez stressed to Walla News. The Russian language has no definite article, so he might be imputing the “arson” at al-Aqsa to unidentified Israelis or to the Israelis, meaning the state or its agents. But by the time of writing, it was already clear that no Israelis had set the mosque on fire on 21 August. Rather, it was a deranged young Australian, Denis Michael Rohan. Falsely exploiting an incident is what states, and certainly intelligence agencies, do all the time – but why lie in an internal communication? Every such Soviet document, let alone one from Andropov to the Central Committee, was checked and re-checked. The answer can be found in instructions that then-Soviet Foreign Minister Andrei Gromyko issued to his underlings: some day the archives will be opened and their contents will be seen. So, any papers must be phrased as if for public view – that is, to reflect the propaganda line.

India was, at the time, no adversary of the USSR. On the contrary, the “non-aligned” orientation of Prime Minister Indira Gandhi and the socialist policies of her Congress Party were actually friendly to Moscow, and had significant domestic Moslem support (as against the Hindu-nationalist Janata Party – now BJP – which took power later and is now led by Prime Minister Narendra Modi). Consequently, Israel had no diplomatic ties with India; their relationship improved, and relations were established, only in the 1990s after the disintegration of the Soviet Bloc.

So, for lack of an Israeli embassy in New Delhi to picket, it had to be the American one -- but the KGB’s target was not there anyway. “This involved the superpower struggle,” said Ginor, “The arena was not merely India or the Moslem world, nor was it about al-Aqsa. It was the Suez Canal. It was the Cold War, and specifically its Egyptian-Israeli theater in the War of Attrition. What the USSR sought was first and foremost to use the fire as a wedge issue between the United States and Israel, to cast Israel as a burden on Washington by staging mass demonstrations throughout Islam against Israel for supposedly burning down a Moslem holy site.”

The War of Attrition was raging along the Suez Canal, with Israel getting US support while the USSR sponsored Egypt, but the opposing forces were not symmetrical. After being hammered since March 1969 by the numerically far superior, Soviet-supplied Egyptian cannon, Israel turned the tables in late July – a month before Andropov’s memo -- by fielding its air force as “flying artillery.” This effectively countered Egypt’s guns and caused heavy casualties as well as collapsing morale in Egyptian formations. It also destroyed Egypt’s likewise Soviet-made SAM-2 anti-aircraft batteries. The Kremlin had already resolved to send in newer, Soviet-manned SAM-3s – but the Israelis bombed out their newly-dug emplacements before they could be deployed. However, this campaign, carried out largely by the A-4 Skyhawk tactical bombers that Israel began to receive in late 1967, also created a political problem. The US had provided these planes on condition that they not be used for “offensive operations.” Was hitting Egyptian positions that had been firing on Israeli forces in Sinai, which Israel had captured from Egypt in the Six-Day War of June 1967, by way of an offensive or defensive operation? That depended on the eye and address of the beholder, in Jerusalem or Washington. One of President Lyndon Johnson’s last decisions in office was to approve the sale to Israel of the newer, powerful F-4 Phantom jets, much feared by the Egyptians and Soviets. It was up to the fledgling administration of Richard Nixon to implement – or not -- the scheduled supply, at the slow pace of two planes at a time, which was scheduled to begin in September.

Faced with the turning tide against its client in the War of Attrition, the Soviet leadership resolved not only to dispatch better weapons to Egypt but also to man them with regular Soviet crews, as distinct from the advisers that were hitherto attached to Egyptian units. “On 1 August, recruitment and training of Soviet fighter pilots for action in Egypt was begun,” stated Remez. Ginor added: “previous scholarship held that the direct Soviet military intervention, which included those SAM-3s too, started only in January 1970, after the first Phantoms to arrive in Israel began deep-penetration bombings in and around Cairo and a desperate President Gamal Abdel Nasser supposedly flew secretly to Moscow to plead for help. We have shown that it actually began as early as the previous summer.”

This set the scene for Andropov’s memo. The USSR had every interest to legitimize its massive, direct intervention. What could be better than to smear Israel – in Moslem view, of course, but mainly as seen from Washington, which had become Israel’s sole source for weapons, especially those vital planes? The effect of each specific “special measure” could not be measured, but a steady drumbeat might – Andropov hoped – cumulatively achieve a result. Thousands of screaming protesters outside the US Embassy in India would not only resonate in the media, but doubtless be reported by the ambassador to his home office.

The United States had just landed a man on the moon, but it was deeply mired in the mud of Vietnam and torn apart by domestic dissent. Moscow had reason to believe that capitalism was approaching its final phase and needed just another push. Western Europe was barely recovering from the upheaval of May ’68, and was still at odds with Uncle Sam. Leanings in “nonaligned” Latin America, Africa and Asia were more pro-Soviet than pro-American. The KGB, along with its dedicated junior partners such as the Romanian Securitate and the East-German Stasi, were fostering anti-western terrorist groups from Palestinian and Irish nationalist organizations through ultra-left urban terrorists such as the Italian Red Brigades and the (West-)German Red Army or Baader-Meinhof Gang. Through this prism, it was not too hard to portray Israel as damaging US efforts to improve relations with the Moslem world. The KGB constantly underwrote anti-Israeli and anti-Western subversion – the notorious “Jackal” Carlos was recruited and financed by the Soviets through Palestinian allies and much of his activity was aimed at Israel. The superpower contest was waged by proxy wars in the Middle East, Latin America, Asia and any other scene of opportunity from the space race to the Olympic Games.

The Phantoms did arrive in Israel and went into action, but so many of them were shot down by the Soviet regulars’ SAMs that Israel was constrained to accept a cease-fire, ending the War of Attrition a year after Andropov’s initiative. The USSR immediately resumed preparation of the Egyptian Army for the complex operation of crossing the Suez Canal; more importantly, the Egyptians and Soviets  violated the truce right away by advancing the anti-aircraft missile shield up to the canal bank, creating the protective envelope that would enable the cross-canal attack in the Yom Kippur War three years later.

One can’t tell whether Andropov considered those 5,000 rupees well spent. This was one of many small operations that the fearsome Soviet superpower conducted against real or perceived adversaries. We do know that since soon after Israel’s establishment in 1948, it was a major target for the KGB, and remains one for the latter’s successor agency in foreign intelligence, the SVR. Andropov progressed from spy chief to the top leadership of the Soviet Union; decades after the USSR broke up, another KGB product now occupies the same Kremlin office in post-Soviet Russia. History has come full circle.