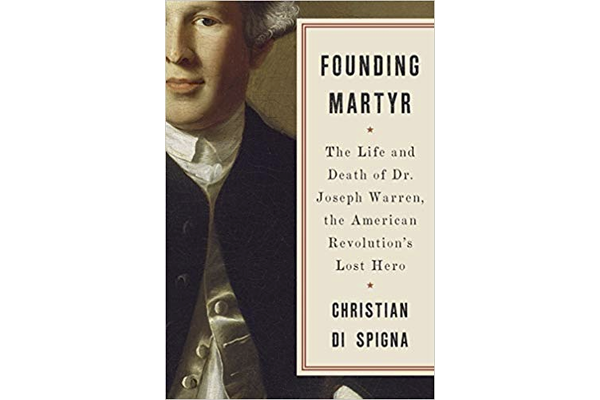 “I’m going to get right into it because there’s so much to tell!”  Christian Di Spigna is a man on a mission.  Most public speakers start with pleasantries.  They thank sponsors, greet friends in the audience, ease into substance.  Not this one!

“Here was a man who did so much and has become largely forgotten,” he asserts from the stage.  “The Boston Massacre, the Boston Tea Party, Paul Revere’s epic midnight ride, and the Battle of Bunker Hill loom large as monumental incidents that launched the country’s birth, discussed in countless history books.  But most of those books fail to mention the role of Dr. Joseph Warren, the revolutionary pillar of that watershed epoch.  I tried to revive his story and present an accurate portrayal of his life and death as best I could.”

“Before George Washington, before Thomas Jefferson, even before Alexander Hamilton, there was Joseph Warren,” the Wall Street Journal declares.  “A British commander once called him ‘the greatest incendiary in all America.’”  Christian Di Spigna has produced a gripping biography.”

Pulitzer Prize-winning historians Eric Foner and Joseph J. Ellis endorse it, respectively, as “an important contribution” to “bring Warren to life again as the prominent partner of Samuel Adams in leading American resistance to British imperialism in the decade before the first shots were fired.”

Sixty-one artifact and image slides frame the author’s lecture.  Facts and style features so struck me that evening that I went two nights later to Manhattan’s historic Fraunces Tavern Museum – where Washington bade farewell to his generals -- to witness  Di Spigna’s performance once more.

“That the late acts of the British parliament for blocking up the harbor of Boston, for altering the established form of government in this colony (Massachusetts), and for screening the most flagitious violators of the laws of the province from a legal trial, are gross infractions of those rights to which we are justly entitled by the laws of nature, the British constitution, and the charter of the province,” one of its nine grievances, foreshadows Jefferson’s format.

That “delegates of every town and district in the county of Suffolk” chose Warren to produce a report that would place them in peril proves that peers accorded the highest regard to this erstwhile physician. The document’s likeness to Richard Henry Lee’s 1766 Leedstown Resolves in Virginia suggests the chronological and geographical range of Warren’s political antenna stretched far beyond the Bay Colony.

Warren was a compelling speaker in substance and style.  His 1772 Boston Massacre Oration based constitutional law in the Roman Republic’s “Twelve Tables” and the Enlightenment’s ideals, precedents for the “Glorious Revolution” that in 1645 granted rights to all British subjects.  His five-page legal brief weighs whether parliamentary and royal decrees have preserved or violated those rights in America.  Colonial resistance to British “imperialism” is, he finds, imperative.

Rome “degenerated into tyrants and oppressors, her senators forgetful of their dignity, and seduced by base corruption, betrayed their country, her soldiers, regardless of their relation to the community, and urged only by hopes of plunder and rapine, unfeelingly committed the most flagrant enormities; and hired to the trade of death, with relentless fury they perpetrated the most cruel murders…Thus the empress of the world lost her dominions abroad…became an object of derision and a monument of this eternal truth, that public happiness depends on a virtuous and unshaken attachment to a free constitution.” British rule, having broken this compact, will ruin us, Warren warns.

Close your eyes, open your ears, pretend to hear” the roar of a Boston crowd that the Stamp Act, Quartering Act and Boston Massacre have already aroused.  Our path is clear, Warren cries out: rebellion!

“May our land be a land of liberty, the seat of virtue, the asylum of the oppressed, a name and a praise in the whole earth, until the last shock of time shall bury the empires of the world in one common undistinguished ruin!”  Boston citizens, whom precedent guides and rhetoric persuades, will heed his command.

Yet Warren, more than mere orator, orchestrated revolutionary acts through the Sons of Liberty and Committee on Safety, as Di Spigna makes clear.

“Dr. Warren coordinated a massive intelligence network to stay abreast of British troop movements.  He sent Paul Revere with the Suffolk Resolvesto the First Continental Congress and assigned him to make that famous midnight ride.  John Adams wrote in his diary that General Warren kept hassling me about going to the political meetings, but I didn’t want to get involved.”

Di Spigna distills twenty years’ research into a minute speech plus discussion. Facts fall like rain from his lips as he barrels along; clock’s ticking!  He sheds light on launching his quest when I ask.

“I found ‘Stories of General Warren’ in a bookstore when my wife and I missed a ferry to Block Island on vacation.  I didn’t know him at all then but reading other books about the American Revolution taught me to question what I’d already learned through the years.”

“When you start writing about something you have to go to the places and get a feel for it, experience it, see what these people actually saw,” he explained.  I scribbled that in my notebook; days later I still “heard” him say that, so I sent him my question: why, in this case, was that necessary; hadn’t centuries of commerce and industry irreparably altered the scene?

“It can be challenging to reimagine landscapes and history that has shifted and changed over the years,” he answered, “but there are vestiges of the colonial era in Boston.  Maps, prints, drawings, and certain photographs can help piece together the ancient landscape.”  Colonial Williamsburg, Virginia, “as close as we can get to strolling through an eighteenth-century town,” he added, enhanced memories of what he saw and felt in Boston.

Fragments of diaries and medical ledgers the author sought and bought at auctions and displayed in slides filled out the jigsaw puzzle his research completes.

Founding Martyr: The Life of Dr. Joseph Warren, the American Revolution’s Lost Hero, honors its subject and tireless author.  His presentation earned standing ovations – and moved me -- both times.