The History Behind a Recently Defaced French Holocaust Memorial

Norman JW Goda is the Braman Professor of Holocaust Studies and Director of the Center for Jewish Studies at the University of Florida. 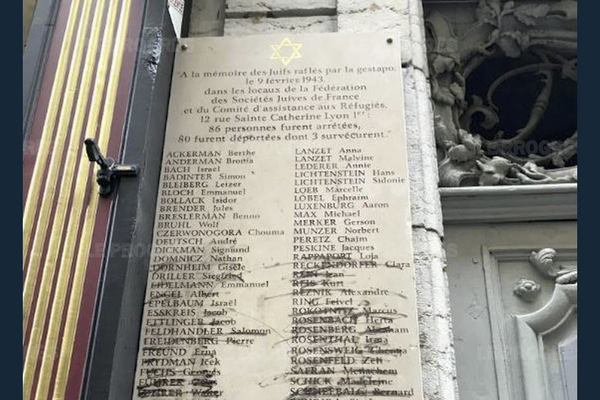 On 21 October a Holocaust memorial in the French city of Lyon was vandalized. The memorial plaque at 12 rue Sainte-Catherine in the central part of town contained the names of the 86 Jews arrested at that address on 9 February 1943. It was the largest single roundup of Jews in the city. Most of those arrested were subsequently murdered in Auschwitz and Sobibor. On the plaque, black paint was used to cross out their names.

Sadly this is only the latest such act of defacement in Europe and the US this year. Still, there is something especially ironic about this instance. The victims of this roundup had already been, effaced in a sense--forgotten after the war, then manipulated during the 1987 trial of Klaus Barbie, the Gestapo chief whose signature was on the Nazi records concerning the roundup, and finally ignored by the passage of time as it changed the once picturesque alleyway in central Lyon.

The Germans occupied Lyon with the rest of southern France in November 1942, but as of February 1943, the Gestapo in Lyon had arrested very few Jews. The German police were understaffed, underinformed, and they had to contend with French resistance networks in Lyon, which formed a critical hub of underground activity. Jews, meanwhile, were hard to find. Most, (even those who had arrived from Eastern Europe) spoke French and the trade in false identification papers became more vigorous with time. As one Gestapo officer put it, France was “an accursed country” because “you cannot tell a Jew from a non-Jew.”

12 rue Sainte-Catherine housed the Lyon headquarters of the Union générale des israélites de France (UGIF), the umbrella Jewish organization created at the behest of the German and French authorities. It continued the social welfare activities of prewar Jewish charitable organizations. 9 February 1943 was a distribution day. Jews arrived seeking everything from ration cards to medicines to advice on reaching and crossing the Swiss border. They were easy targets. Gestapo agents with military escort entered the UGIF offices and simply waited for Jews to show up. Eighty-six Jews were arrested. Others were warned away by the few who escaped the trap. Klaus Barbie reported to his superiors that he had bagged a critical resistance network. It was an early version of Barbie’s later tall tales of counter-intelligence expertise. But though the Gestapo fortuitously arrested a handful of young men and women involved in the Zionist underground, Barbie knew nothing of them or their network. None were even interrogated before their deportation.

The roundup was largely forgotten afterwards. Most of the arrestees were gassed, the few who escaped the roundup hid successfully, and Gestapo crimes in Lyon and its environs over the next year and a half became bloodier, ranging from torture to summary shootings to mass reprisal killings. With the liberation of France in August 1944, it was these most recent atrocities, locally carried out and largely against resistors, that were adjudicated. The French military trial of Barbie in 1952, in which Barbie was tried in absentia, centered on the bloody April 1944 German counter-insurgency campaign in the Jura region. A subsequent trial of Gestapo officials in 1954, in which Barbie was tried again in absentia, covered a range of crimes including the mass shooting of resistors in Saint-Genis-Laval and the mass killings at Bron airfield just before the German retreat. There was no mention of the rue Sainte-Catherine roundup.

Barbie, meanwhile, forged a new life for himself and his family in Bolivia, where the US Army Counter-Intelligence Corps had sent him in 1951 following four years of surely sub-standard work for the Americans. He was not discovered until 1972, not deported to France until 1983, and not tried in Lyon until 1987. “New” crimes now had to be found. Barbie was to be tried not for ordinary war crimes, but for crimes against humanity, which the French government made imprescriptible in 1964. Moreover, crimes already adjudicated in the 1950s could not be retried. Barbie had indeed committed several crimes that fit the legalities of 1987 trial, the details having been researched by Nazi hunters Serge and Beate Klarsfeld in the Gestapo records collected and held by the Centre de documentation juive contemporaine (CDJC) in Paris. The roundup at rue Sainte-Catherine was one of these crimes.

The matter was open and shut. Relevant Gestapo records with Barbie’s signature were submitted into evidence, and early in the trial, escapees and the lone living survivor from the roundup testified as to how the Gestapo arrested them or their loved ones. But a cruel wrinkle emerged by trial’s end. Barbie’s defense attorney was Jacques Vergès, a controversial and outspoken celebrity attorney known for anti-colonial activism. Hisclients in the 1950s included members of Algeria’s National Liberation Front standing before French military courts. In the 1960s, Vergès’s anti-colonialism developed into a more pronounced anti-Zionism and anti-Semitism. He spun conspiracy theories concerning the Rothschilds’ supposed behind-the-scenes machinations before the Six-Day War, and he wrote polemics defending Palestinian terrorists who, he said, were stigmatized by imperialists backed by Jewish money. Now Vergès argued that the Barbie trial was a political setup by Zionists who aimed to obscure what he called similar Israeli crimes in the Middle East. The Zionists, Vergès insisted to one French magazine, “are always holding this [type of] trial. They rehash them so as always to appear as victims.” The Algerian press concurred that the Holocaust was “the Jewish Olympic flame which maintains global financial power imposed by the media.”

In his three-day summation at the end of Barbie’s trial, Vergès wove an elaborate theory. Why, he asked, was the rue Sainte-Catherine roundup only raised “out of the mud” in the 1980s? The answer, he said, was so that the Jews could manipulate its history. Barbie had reported in February 1943 that he had arrested resistors, and indeed, Vergès falsely argued, East European Jews at the rue Sainte-Catherine on 9 February had links to the Allies through Switzerland. Barbie had thus engaged in legitimate military counter-espionage. But the roundup, Vergès professed to reveal, was actually occasioned by the UGIF itself. The Union was “a collaborationist body,” of bourgeois French Jews who, like Vichy itself, viewed the deportation of poor working-class Jews as politically desirable. “It was the directors of the UGIF themselves,” Vergès said, “who lured the families to the headquarters … under the pretext of providing aid.” The court exhibits, Vergès continued, distorted the true picture. Records submitted into evidence were handpicked at the CDJC by his nemesis Serge Klarsfeld, while the UGIF records that revealed the “truth” lay hidden in same Jewish archive, which, he said, secretly maintained “a quasi-monopoly of information.” “Only the UGIF records, in possession of the CDJC, would have been able to get at the bottom [of] this roundup…. The archives at least partially place the responsibility on Jewish notables in the deportation of their brothers. Must we cover this responsibility or transfer it to Lieutenant Barbie? The question … looms in the conscience.”

In fact, the UGIF records at the CDJC had been open to researchers for many years. Vergès plagiarized much of his summation from journalist Maurice Rajfus’s deeply flawed book on the UGIF, published nearly a decade earlier, based on some of the long-available UGIF files. The French dailies did not doubt Barbie’s fundamental guilt. Still, having turned out in force to hear Vergès’s fiery summation after having skipped most of the trial including the testimony from the roundup’s survivors, some reporters were almost willfully bamboozled. No journalist followed up with the CDJC itself to see if records were really hidden. Instead Lyon Figaro assessed Vergès’s summation on rue Sainte-Catherine as “sometimes confused” but also “sometimes brilliant.” The Paris dailies were fascinated by the theme of “Jewish collaboration” and they liberally quoted Vergès’s one-liner that “the Jewish community … had its traitors.”

Though the court found Barbie guilty on all counts, the charges of Jewish coverups hung in the air. On the anticolonial and anti-Semitic left, Tunisian-born writer and filmmaker Said Ould Khelifa claimed that the Barbie verdict perpetuated the “western tendency toward the hierarchization of inhumanity.” Focusing on the rue Sainte-Catherine roundup, Khelifa wrote that Vergès had delivered to the Jews a “terrible revelation.” The court, Khelifa insisted, had simply not seen all of the evidence. In the years ahead, French Holocaust deniers routinely referred to UGIF collaboration with Vichy as a disclaimer of Jewish victimhood, and in the 1997-98 trial of former Vichy official Maurice Papon, the defense falsely charged that the UGIF had drawn up Papon’s deportation lists.

The plaque at 12 rue Sainte-Catherine accurately listing each of the roundup’s victims under the symbol of a Star of David was installed in 2011 by the Association of the Sons and Daughters of the Jewish Deportees of France. But it is a Holocaust memorial that, even before its defacement in October 2019, had been increasingly, and gloomily, out of place. The upper floors where terrified Jews were arrested in February 1943 have housed a barely reputable late night establishment named the Sauna Club des Terreaux since before Barbie’s trialin 1987. Gritty bars and take-out stands flank the building on either side. Few if any passers-by notice the plaque, the names on which were forgotten after the war, manipulated by anti-Semites thereafter, and now, have finally been, quite literally, crossed out.