Too Important or Too Irrelevant? Why Beijing Hesitates on Hong Kong 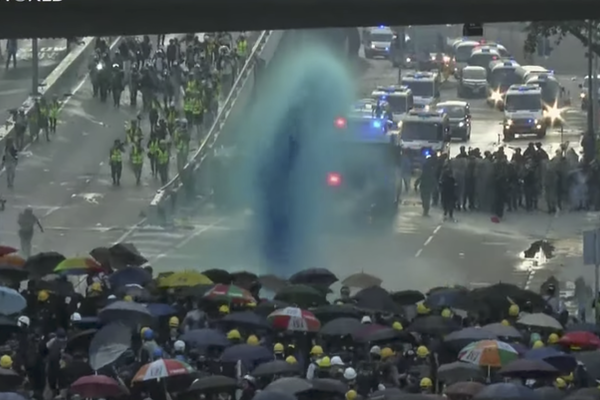 Two competing narratives possibly explain why Beijing’s authoritarian communist rulers have not so far interfered in the increasingly violent protests in Hong Kong, now six months old and heading into a deadly new phase. Whichever explanation is correct will determine how long Beijing will stay patient if the impasse drags on and the violence continues to grow.

The answer may also likely decide whether the ‘one country, two systems’ formula can survive intact.

One account, in London’s Financial Times, says that the Chinese have largely remained on the sidelines, leaving it to local police and authorities to find or force a resolution because Hong Kong is no longer largely significant to China. This theory argues that Hong Kong’s days as the mainland’s key financial base are long over. Thus, the territory can be left alone to clean up its own mess.

The other says just the opposite. Beijing is hesitant to intervene directly—militarily or by ending the territory’s autonomy—because Hong Kong remains too important, as a financial and as an international symbol. Any direct intervention—for example, by sending in the People’s Armed Police—would be devastating to China’s international image while it is already burdened with a slow economy and a trade war with the United States.

Which is right? Is Hong Kong too irrelevant or too important for China to directly intervene? There is evidence to buttress both sides.

At the time the territory was handed back to China in 1997, after one hundred and fifty years as a British colony, Hong Kong accounted for nearly 20% of China’s GDP. Today, that figure is less than 3% The neighboring Chinese city of Shenzhen, just across the border has surpassed Hong Kong in the size of its economy and its still soaring annual growth rate. Shenzhen and Guangzhou are already surpassing Hong Kong when it comes to start-ups and new technologies.

Hong Kong saw its role as the entrepot for trade with China shrink once the mainland joined the World Trade Organization after 2001. Chinese citizens now have their own stock markets, and more than 150 companies have bypassed Hong Kong to list on major American stock exchanges.

According to this view, China’s communist leaders under hardline ruler Xi Jining might be satisfied to let Hong Kong burn, so long as the contagion doesn’t spread north. With its liberal values and British colonial holdovers, Hong Kong was always a troublesome source of suspicion and mistrust.

If Hong Kong’s internal conflagration hastens it replacement by Shenzhen or Shanghai as China’s most important city, Xi might actually see that as a long-term benefit. If the protests eventually lead to an exodus of local elites with overseas passports, as well as foreigners, multinationals, and foreign media outfits that make Hong Kong their headquarters, so much the better.

But the competing view holds that while Hong Kong’s importance to China’s overall GDP has lessened, the territory remains crucial to the mainland’s economic well- being.

Hong Kong still accounts for more than 60% of all foreign direct investment flowing into the mainland and that number has grown despite the months of protest. Hong Kong’s stock exchange is still the third largest behind New York and Tokyo, and ahead of London, and China’s markets remain closed to foreign investors. Hong Kong’s credit rating is higher, its legal system is internationally respected, and money can be freely exchanged. In China, strict capital control prevents this occurrence.

President Donald Trump’s trade war has heightened the importance of Hong Kong being treated globally as a legal economic entity distinct from China. Chinese officials have warned Washington that the Hong Kong Human Rights and Democracy Act of 2019, which unanimously passed the House of Representatives last month and enjoyed bi-partisan support in the Senate, is “an attempt to use Hong Kong to contain China’s development”, in the words of Yang Guang, a spokesman for the Hong Kong and Macao Affairs Office which handles the territory’s affairs in Beijing.

There are even opposed views on whether the continuing unrest in Hong Kong poses the threat of contagion to the mainland.

One theory maintains that Beijing’s rulers fear that the pro-democracy protests in Hong Kong might spark similar demonstrations in Guangdong and other Chinese cities. They are wary about making even common-sense concessions—for example allowing an independent commission to examine police brutality or restarting the stalled political reform process--for fear of sparking like demands at home.

Yet the opposite position also has plausibility. That is, with strict control of the mainland media and the internet, Chinese propagandist have succeeded in painting Hong Kong protests as an anti-China secessionist movement launched and financed by notorious ‘black hand’ foreign foes, namely the American CIA. Instead of sympathy, many mainland Chinese have only distain for the residents of Hong Kong, who they see as wealthy, spoiled, and lacking in love for the motherland.

Those calls are only likely to grow louder after the violence on 11 November, which included widespread vandalism, the forced shut down of university campuses, and the police shooting of a protester in the stomach.

It is becoming more apparent that Beijing’s leadership is caught somewhere between—fear about allowing the unrest to continue, but paralyzed from intervening by the concern of making a tragic, perhaps fatal, mistake.

Chinese communist rulers are now facing the most serious political unrest on their territory since the June 1989 pro-democracy protests in Tiananmen Square. The massacre by People’s Liberation Army troops on that occasion cost China nearly a decade of sanctions, international isolation, and restrictions on technology transfers.