Painter of Disquiet: Félix Vallotton at the Metropolitan Museum of Art'

Sam Ben-Meir is a professor of philosophy and world religions at Mercy College in New York City. 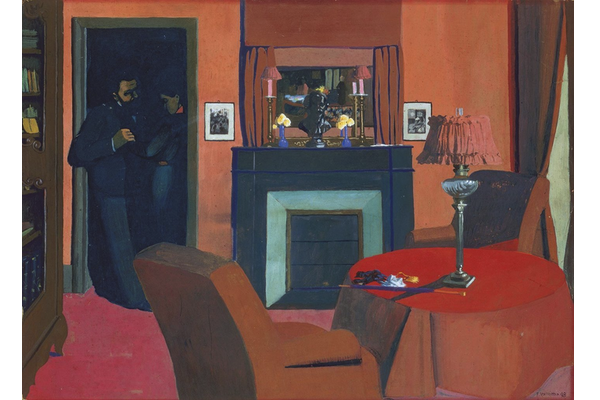 The Metropolitan Museum of Art is currently presenting the work of Félix Vallotton, an artist who has been largely neglected relative to his contemporaries, such as Pierre Bonnard and Édouard Vuillard. This makes the present exhibition all the more welcome, and fascinating. Vallotton’s work unquestionably merits the renewed attention — his paintings possess a mysterious quality, narrative appeal, and attention to detail, as well as invoke a delicious sense of irony and wit.

Born in the Swiss town of Lausanne on the shores of Lake Geneva in 1865, Vallotton displayed early an ability to draw from life; and at sixteen he arrived in Paris to study painting at the Académie Julian. A self-portrait at the age of twenty reveals a virtuosic, confident brush and much more — Vallotton is not interested in merely demonstrating his facility as a realist painter: he has a penetrating eye, a psychological depth, and a naturalism that owes much to northern Renaissance masters, especially Albrecht Dürer and Hans Holbein.

It is not entirely clear when Vallotton’s friendship with Les Nabis began – from the Hebrew word for prophet, the Nabis were an avant-garde group of Parisian artists, which included Bonnard, Vuillard, Charles Cottet, and Ker-Xavier Roussel, among others. Valloton’s nickname within the group may be revealing – he was the ‘foreigner Nabi’. Perhaps this name reflected his Swiss origin, but the Nabis were an international group anyhow. It could also reflect in some measure that Vallotton was something of a loner; but it may allude to the fact that while for a time he adopted the Nabi’s dismissal of naturalism in favor of flat forms and the expressivist use of color, Vallotton was and fundamentally remained a realist painter.

Recognition arrived early in Vallotton’s career for reviving the art of woodcut prints which had largely been forgotten since the Renaissance. Indeed, by the age of 25, Vallotton had single-handedly brought about a kind of revolution in xylography. Inspired by Japanese woodcuts that were popular in Paris at the time, Vallotton produced images with sharp contrasts of jet black and pristine white. His woodcuts are remarkable for their commentary on the French bourgeoisie, their stinging rebuke of societal decadence in fin-de-siècle Paris, their critical orientation to the police. Vallotton has an eye for violence — be it in the form of murder, or the sudden carriage accident, the political execution or the suicide. Vallotton combines a dark realism with sophisticated satire, wry humor, and a keen acerbic wit. He has an eye for the ambiguous and the enigmatic — a deft and subtle touch that defies finalization. The Demonstration from 1893 renders the political chaos of the day with humor — from the old man who has lost hold of his hat to the sole figure in white, a woman racing along the left hand side.

Vallotton would return in both woodcuts and paintings to the scene of the bourgeoisie shopping for the latest luxury goods at the Bon Marche Department Store — the first such store of its kind in the world. The 1898 triptych is not without a certain irony — given that the format Vallotton chose was traditionally associated with altarpieces such as would be found in church. Which is just to underscore the Vallotton is a close observer of modernity, fascinated by the new world he sees emerging around him — with its rampant consumerism, and its technological novelties (such as a moving conveyor belt along a footbridge, which he includes in his woodcut series devoted to the World’s Fair of 1900.)

A series of ten woodcuts entitled Intimités is a sustained and biting critique, and among Vallotton’s greatest achievements as a graphic artist. As an unsettling and disquieting series which lays bare the hypocrisies of bourgeois society, Vallotton deftly exposes a decadent class through scenes of adultery, deceit, romantic quarrels and indecent proposals.

In 1899, Vallotton married Gabrielle Rodrigues-Henriques and the union was to have a significant effect on the remainder of his career. His wife was a wealthy widow and the daughter of a Paris art merchant, which meant that he now enjoyed a certain financial security and could turn exclusively to painting. While Vallotton’s work generally lost its satirical wit and subversive edge — there is also a certain psychological insight and marked turn towards the inwardness of his subjects that constitutes much of the power of this later period.

The acquisition of a Kodak camera in 1899 led to changes in the way the artist worked. Now, he would typically take snapshots of imagery that appealed to him – and then used those photographs to craft his painting in the studio. It appears that often he would retain the sharply contrasting patterns of light and shadow revealed in the small photograph. However, the painter however was by no means subservient to the photographic image, as The Red Room, Etretat (1899), demonstrates. It is a remarkable painting for its unity of composition and psychological structure. All lines in the painting essentially point to (and up to) the seated figure of Gabrielle Vallotton – even the viewer is made to feel they’re looking up to this woman, who meanwhile looks down at the small child in the foreground. This child, so crucial to the psychological depth of the painting is entirely absent, however, from the photograph.

Vallotton was also a master of ambiguity. There is always something more to the story he is telling that must ever remain just beyond our reach. Consider, for example, one of this exhibition’s finest offerings, The White and the Black (1913), a provocative work depicting a young white woman, nude and reclining; and a black woman, seated and coolly smoking a cigarette. The painting may be a response to Édouard Manet’s Olympia (1863) in which a white model, a prostitute likely, lies on a bed attended by a black servant bringing her flowers (probably from a client). But Vallotton may also be in dialogue with Jean-Auguste-Dominique Ingres’ Grande Odalisque (1814) and Odalisque with a Slave (1839). All of his friend’s attest to Vallotton’s love and admiration for Ingres, by whom he was “conquered without offering any resistance” – as one contemporary put it. Vallotton was clearly a close observer of Manet as well, and many of his paintings – for example, Misia at Her Dressing Table (1898) – emphasize the harsh light, the large color surfaces and shallow depth that was characteristic of Manet’s work, including Olympia (1863). But at the same time Vallotton subverts the traditional roles of mistress and servant by making the relationship between these two women utterly ambiguous.

The Provincial (1909) is notable for its exploration of one of Vallotton’s recurring themes – namely, the complex, uneven relationship between men and women. In this painting, and others such as Chaste Suzanne (1922), a powerful female figure holds sway over her subservient male counterpart. The white lace of her blouse protrudes in a witty but subtle reminder of her breasts, which only underscores her sexual dominance over the docile man who sits beside her with eyes deferentially lowered.

Moonlight (1895) is a standout work that reveals the influence of the Symbolists, in Vallotton’s attention to emotional force over actual topographical representation – water, earth and sky have become interfused in what is almost an abstraction. The picture also anticipates the latter part of his career, when Vallotton increasingly turned to landscape painting – often beginning with a photographic image or an on-site sketch, which was then imaginatively reconstructed on the canvas. The painter referred to his later landscapes as paysages composes (composed landscapes) – and remarked in 1906, “I dream of a painting free from any literal respect for nature.” Valloton said he wanted to “be able to recreate landscapes only with the help of the emotion they have provoked in me.” His method allows him to simplify the compositional structure, to intensify the mood and emphasize the emotional impact of color – as, for example, in Last Rays (1911) where we find the silhouettes of umbrella pines as they receive the last light of the evening sun.

Félix Vallotton more than deserves the attention that this exhibition brings. His work – from the groundbreaking forays into xylography, to his portraits and scenes of bourgeois society, to his hauntingly mesmerizing landscapes – defies identification with any artistic school. Like all truly great artists, Vallotton is inimitable; while he experiments with various artistic programs, he ultimately remains aloof from them, determined to paint pictures purged of all sentimentality, beholden only to the emotional, psychological or social reality with which he is concerned. Such a body of work remains ever fresh and vital, and rewards close attention with a glimpse of truth.