“The Last Dance” is the ‘Presidential Historian’ of Documentaries

Jason Steinhauer is a writer, public historian and long-suffering New York Knicks fan. The views expressed in this column are his own—and are in no way colored by his affection for John Starks and Anthony Mason. 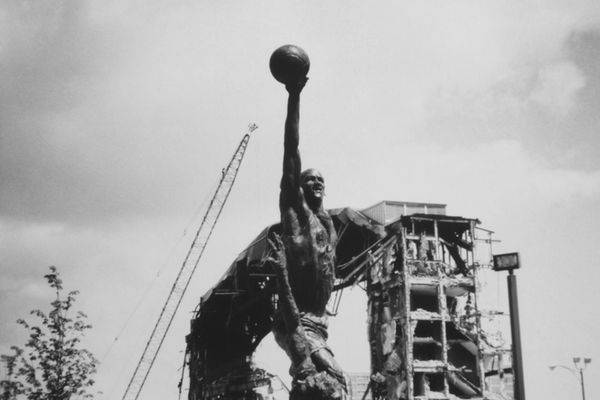 "The Spirit" statue of Michael Jordan outside the United Center Arena, Chicago, in front of the remaining

There’s a scene in episode 1 of “The Last Dance” that reveals far more than it initially appears.

Near the end of the episode, a veteran Michael Jordan is among the most famous people in the world. Before a game in 1997, a wide-eyed reporter approaches him in the hallway for a short interview, to which Jordan acquiesces. The camera trails the reporter after his quick brush with fame. He is gushing, his face flustered, his eyes in disbelief that he shook Jordan’s hand. ‘Wow,’ his face seems to say. ‘I can’t believe I just interviewed Michael Jordan.’

The sentiment sums up “The Last Dance” rather neatly. The 10-episode film is the “Presidential Historian” of documentaries. A film that purports to reveal an ‘untold story’ is, in truth, a recitation of familiar plot points, packaged in tropes of presidential hagiography: palace intrigue, proximity to power, paying homage to greatness, and, in the end, being thankful for the existence of dominant alpha-males (and it is always males), whose superior character and talent lifts a population.

For the non-sports fans among us, “The Last Dance” is ESPN’s new documentary on Michael Jordan’s final season with the Chicago Bulls. Divided into ten episodes, it has debuted during the covid-19 pandemic.

The structure of “The Last Dance” unfolds like a Presidential biography. It opens with a carefully-framed, back-shot of Jordan in his palatial home, evoking a President in the Oval Office: silhouetted, pensive, the weight of the world on his shoulders.

We hear Jordan confirm the fulfilment of his own prophecy, an oration fit for a Commander-in-Chief. “If you remember in 1984 when they drafted Michael Jordan,” Jordan says of himself, “I said then when I got here that we’d be champions… Well, we’re a five-time champion going for six.”

From there the film cascades into a wave of nostalgia, narrated by an all-male cast of sports aficionados: columnist Michael Wilbon, reporter J.A. Adande, broadcaster Bob Costas, reporter David Aldridge, sportswriter Rick Telander, and author Mark Vancil. We get confirmation of the Bulls’ celebrity status through their appearances on Oprah, Arsenio Hall, and the David Letterman show. Wilbon states that Jordan was the ultimate sports “alpha-male,” and we see female fans and small children shrieking each time Jordan is near, ooh-ing and aah-ing like John F. Kennedy fans during the 1960 Presidential campaign.

President Barack Obama even makes an appearance. Obama offers no insight into Jordan’s career; rather his presence is meant to impress us with how powerful a cast the film’s director, Jason Hehir, was able to assemble. Obama states that while living in Chicago he could not afford a ticket to Bulls’ games but that Jordan was someone everyone could “rally around.” President Bill Clinton makes a similar appearance in episode two, revealing equally little about Bulls forward Scottie Pippen, Jordan’s sidekick, who, like Clinton, happened to be from Arkansas—though Pippen grew up in poverty and attended Central Arkansas and Clinton went to Catholic school and attended Georgetown, Oxford and Yale.

We’re reminded throughout the series that Jordan, like George Washington or Abraham Lincoln, was a man of exceptional character as well as talent. He worked harder than anyone else. He didn’t smoke, drink, or do drugs. He gambled, but always within his means. He kept his apartment neat. He wrote letters to his mother. Had he chopped down a cherry tree, he would have surely confessed to it. His destiny as savior of Chicago and the NBA was foretold by his work ethic—and not that he was fortunate enough to grow eight inches in high school. The genetic good fortune to be 6’6” enabled Jordan to earn a spot on the high school basketball team after he was cut the previous year for being only 5’10.” Had he never grown he may have worked at General Electric with his father.

The major plot points revolve around millionaires feeling disrespected. One millionaire, Scottie Pippen was upset that he was underpaid. Jordan, another millionaire, was upset that the general manager wanted to rebuild the team. Dennis Rodman, the eccentric millionaire, was at war with his own insecurities. The millionaire general manager felt slighted because he did not get enough credit. The palace intrigue feels lifted from any number of popular histories of presidents-in-crisis: aggrieved Senators angered at being disrespected by the President, disputes among rival Cabinet Secretaries, battered egos and personal grudges among Senior Advisors. All the while the media and the public circled outside, eager to participate in the unfolding drama. It’s essentially how broadcast media has covered the Trump Presidency.

What makes the film possible is the fact that a camera crew followed the Bulls during the 1997-1998 season. Why they did so is never explained. Who made that decision? For what purpose? The source of the footage is never discussed. Yet this documentary could not exist without it, evidence of how the stories we tell today are dictated by preservation choices made in the past.

Also never discussed are the social and economic implications of major corporate entities run by white Americans exploiting the talent of young black athletes to spawn a global empire worth billions of dollars. The consequences of the NBA’s and Jordan’s ascendancy to worldwide influence are always assumed to be positive. Are they? Was the Jordan-led NBA complicit in ushering in the mass corporatization of sports? What were the consequences of poor children around the world enriching Nike each year by buying $200 sneakers? The documentary goes nowhere near these questions, choosing to stay within the comforts of palace intrigue and platitudinous dichotomies between “the business side of sports” and the “integrity of the game.”

On the matter of sources, for a global superstar in a city as diverse as Chicago, it is overwhelmingly men of a certain vintage that are invited to reflect on Jordan and the Bulls. There are no women interviewed in the first two episodes, with sportscasters Andrea Kremer and Hannah Storm making cameos in episodes 3 and 4. Carmen Electra is interviewed briefly as Dennis Rodman’s sex partner and claims to be oblivious to the larger dynamics. No one who is Hispanic-American nor Asian-Asian is shown on camera, nor is anyone from other countries or other major sports. Much like our Presidential cabinets of yore, this is an all-boys-club of media and basketball insiders making the case to each other how consequential their actions were in bending history. Arthur Schlesinger himself could not have scripted it any better.

Presidential historians earn their prestige through access: access to Presidents, access to sources, access to power. To be able to eloquently chronicle the inner workings of the highest levels of government affords the writer his gravitas. Such is the case with this film: like the reporter in the hallway, the director clearly enjoys his access to sports royalty and the privileges associated with it. The unspoken pact is that powerful figures will grant access in exchange for the right to tell their version of events. Critical analysis is not part of the bargain.

Perhaps “The Last Dance” is harmless since it is ‘just’ about sports. Yet the structure of the film reinforces a way of seeing and thinking about leadership that is distorting and limiting. The hype surrounding the film evinces how such “great man” theories of history (and it is always a man) still retain much potency in American culture. Embedded within these tomes are parables about male leadership, American fortitude, gumption, and grit. Rivalries and bruised egos make for entertaining plot points along the way. The conclusion is always the same, however, as it is in “The Last Dance”: Thank goodness we have alpha-males. Come, let us celebrate them.