Robert Rupp is a professor of history and political science at West Virginia Wesleyan College. His book The Primary That Made a President: John F. Kennedy and West Virginia is being published by The University of Tennessee Press. 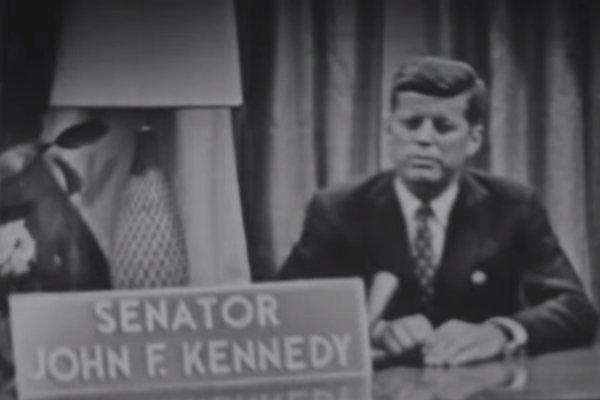 John F. Kennedy in a televised debate from Charleston, WV, May 4 1960

May 10th marks the 60th anniversary of the 1960 West Virginia presidential primary-arguably the most storied contest in modern American politics. And yet, John F. Kennedy traveled so quickly from being a dynamic presidential candidate to a martyred president that many forget his debt to West Virginia in his quest for the Democratic presidential nomination.Kennedy himself acknowledged this debt when he returned, as president, to the state to celebrate its centennial on June 20, 1963. At that event, he declared, “I would not be where I am, I would not have some of the responsibilities which I now bear, if it had not been for the people of West Virginia.” Besides propelling Kennedy to the Democratic nomination, the West Virginia primary changed the face of politics by advancing religious tolerance.

In the five weeks he campaigned in the state, the press and the candidate turned the primary into a referendum on religious tolerance.  As Parkersburg (WV) newspaper editor summed it up, “West Virginians will either bury their prejudice, or they will bury John Kennedy.” A Kennedy victory in a state where Catholics made up only 4 percent of the population would demonstrate that a Catholic could get Protestant votes.

When Kennedy won in a landslide, carrying 50 of the 55 counties and collecting almost 61 percent of the popular vote , the Charleston Gazette described the results as a “devastating victory” that should prompt reconsideration by those party professionals who held Kennedy “at arm’s length because of doubts that a Roman Catholic could be elected to the White House.”

Kennedy’s experience in West Virginia  did more than just propel him to the presidential nomination, it became a teachable moment for the future president, one that influenced the policies of his administration and the direction for the nation, especially regarding federal attention on Appalachia.  West Virginia became a learning experience because the Massachusetts  U.S. Senator spent five weeks campaigning in what was one of only two seriously contested primaries in the nation. Never before had a presidential contender spent so much time in a state, and it could be argued that never before or since had a future president learned so much.