Peace is Temporary Without Trustworthy Leaders: Lessons from the Philadelphia Mutiny

David Head teaches history at the University of Central Florida. He is the author of A Crisis of Peace: George Washington, the Newburgh Conspiracy, and the Fate of the American Revolution. 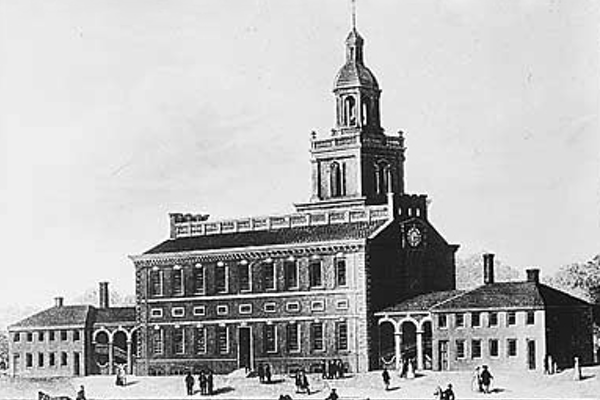 We often look to history for guidance on the present, and we frequently call on the Founding Fathers for inspiration. But as we approach the June 21 anniversary of the Philadelphia Mutiny of 1783—when soldiers marched on the city, surrounded the Pennsylvania State House (today’s Independence Hall), and threatened Congress at the points of their bayonets—the lessons for our own time are only troubling.

Because unlike the people of Revolutionary-era America, we have no equivalent to George Washington, a figure all sides could trust for leadership.

The Philadelphia Mutiny originated in a longstanding injustice: throughout the war, the army was seldom paid. By the early summer of 1783, an armistice was declared and only the final version of a treaty was needed to make it official—but the men in uniform still awaited payment. Even when the men began heading home in early June, thousands departed with empty pockets.

But not everyone. Some lucky Marylanders, for example, had been paid before mustering out, and as they marched south from their cantonment in New York they shared the news with the Pennsylvania troops they passed.

Infuriated by the unequal treatment, some 80 to 100 men left their posts in Lancaster and struck out for the City of Brotherly Love, where they joined more troops stationed in the city, also not happy about getting no money for their service.

Rumors swirled that the men would loot the Bank of North America, and Congress implored Pennsylvania to deploy the militia. But state leaders demurred. People thronged the streets to cheer the mutineers, suggesting the militia might not turn out as ordered.

On June 21, the soldiers surrounded the state house. Inside, Congress gathered in the same first floor room where they had adopted the Declaration of Independence. But instead of producing a grand statement of American ideals, they wrangled with the Pennsylvania government, meeting upstairs, about how to make the mob go away.

That night, Congress sent a plea for George Washington, encamped in New York’s Hudson Valley, to send reinforcements. Then, the delegates voted to flee the city and reconvene across the river in Princeton.

Washington was incensed when he heard about the mutiny. “I cannot sufficiently express my surprise and indignation,” he wrote, “at the arrogance, the folly and the wickedness of the Mutineers.” Washington dispatched 1,500 troops who dispersed the malcontents and arrested the ringleaders.

On the eve of the Revolution’s final Fourth of July, Congress lay prostrate in New Jersey, a sign that independence almost failed before it was fully achieved.

The story of the Philadelphia Mutiny offers scant comfort for us today. A show of force restored order, but that worked because the mutineers were armed soldiers committing a capital crime by going outside their commanders’ orders. They weren’t civilians protesting, as witnessed in the wake of the George Floyd’s killing.

Once the mutiny was put down, peaceful demobilization was achieved largely thanks to Washington’s presence as a leader trusted by many soldiers and civilians alike.

Renowned for his virtue, Washington was scrupulously deferential to civilian command of the army. He acknowledged the military’s proper place with large gestures, such as returning his commission as commander in chief to Congress once the peace with Britain was official.

Yet, he was also master of the small, telling detail. Whenever he appeared before Congress, for example, he stood while the delegates sat and he called the body’s leader “Mr. President” or “your Excellency,” titles Washington himself would later enjoy.

At the same time, Washington advocated tirelessly for his men. He urged Congress and the states to provide more supplies. He remonstrated with politicians to deliver pay. He warned everyone not to overburden the army’s patience.

In an environment of intense mutual suspicion—soldiers accused civilians of stingy ingratitude while civilians saw the army as a threat to their liberty—Washington’s trustworthiness bound the two sides together.

And that’s where we have a major problem. We have no similar figure to rally around. Instead, we get division and confrontation and encouragement to continue fighting our political enemies.

Until we find leaders capable of building trust, people’s discontent, even if extinguished for the moment, will only smolder until bursting out again.