Newest Born of Nations: European Nationalism and the Confederate States of America

Ann Tucker is Assistant Professor of History at the University of North Georgia and author of Newest Born of Nations:  European Nationalist Movements and the Making of the Confederacy (University of Virginia Press, June 2020). 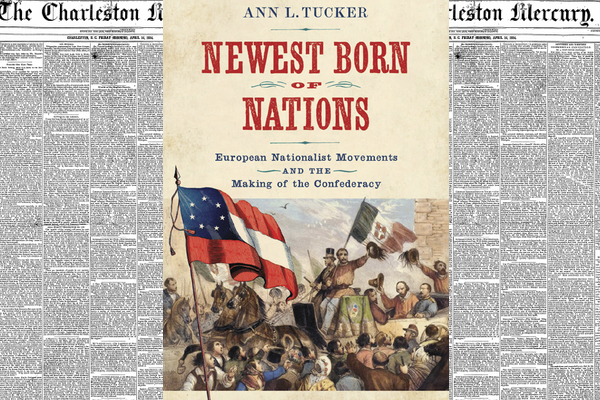 The Confederacy has exploded into the news once again, as protestors seeking justice for African-Americans topple Confederate statues and municipalities follow their lead in pledging to remove more.  These events have again been greeted by claims that the Confederacy was unrelated to slavery and therefore to contemporary problems of racism.  At the heart of this conflict is the question of what the Confederacy represented then and represents now. Historians who point to primary sources such as the Ordinances of Secession and Alexander Stephens’s “Cornerstone Speech” agree, along with Black Lives Matter protestors and much of the public, that slavery inspired secession and defined the Confederacy, though other Americans remain committed to a Lost Cause re-interpretation of the war that posited states’ rights, not slavery, inspired the Confederacy.

My new book, Newest Born of Nations:  European Nationalist Movements and the Making of the Confederacy, answers this critical question through an international perspective.  In Newest Born of Nations, I argue that white southerners in the Civil War era looked to contemporary European nationalist movements, such as the Revolutions of 1848 and Italian Risorgimento, observing aspiring nations as they sought independence and self-government from empires and monarchies.  White southerners used their analysis of these nationalist movements to compare the South to aspiring nations abroad, a process that allowed them to refine their vision of an ideal nation; to conceive of the South as a potential nation, distinct from the North and separate from the United States; and to justify secession and the creation of the Confederacy.  White southerners’ international perspectives on nationalism thus played a critical role in shaping and defining southern nationalism.

With these arguments, Newest Born of Nations corroborates the scholarly consensus that slavery fueled secession and defined the Confederacy.  White southerners developed multiple international perspectives that positioned the Confederacy differently relative to aspiring nations in Europe, but all of which used international comparisons to defend a desired vision of southern nationhood. In what I call the liberal secessionist international perspective, secessionists and Confederates claimed that secession and the creation of the Confederacy were legitimate because the southern nation followed in the footsteps of European nations in seeking liberal ideals such as self-government, national self-determination, and even republicanism.  These secessionists drew comparisons between the South and aspiring European nations, claiming that the white South was oppressed by abolitionism just as aspiring nations such as Ireland and Italy were oppressed by tyrannical empires such as Great Britain and Austria.  The Richmond Daily Dispatch, published by James A. Cowardin, was a leading proponent of this view.  Upon the election of Abraham Lincoln of the anti-slavery Republican Party, for example, the Dispatch wrote “This day the South comes under a dominion which has been forced upon her by the North; this day she begins a servitude as involuntary as that of Italy to Austria; this day inaugurates a foreign rule as distinct and complete as if we had been conquered by European bayonets, and annexed to the throne of some continental despot.” To these secessionists, any political victories by abolitionists would deny pro-slavery whites their self-government, just as tyrannical regimes abroad denied European nationalists their self-government.

Fundamentally, then, these white southerners argued that they had a right to protect slavery, and that any threat to that supposed right to slavery constituted tyranny akin to that of a European empire.  Of course, the existence of slavery actually violated principles of self-government, and the desire to protect slavery similarly opposed rather than upheld the liberal values of self-government or republicanism.  Nonetheless, the liberal international perspective used international comparisons to claim that white southerners’ desire to protect slavery fit within the bounds of emerging nationalism in the mid-nineteenth century, and that the Confederacy was as legitimate as other new nations seeking independence.

The conservative secessionist international perspective was even more upfront in centering slavery at the heart of the Confederacy.  In the conservative international perspective, secessionists argued that secession and the Confederacy were legitimate because the Confederacy purified nationalism of what these secessionists claimed were destructive excesses of liberalism in aspiring nations in Europe.  Recognizing that most nationalist movements in Europe had failed, secessionists using the conservative international perspective claimed that these movements had failed because they sought not just national independence, but also greater social equality – a value obviously at odds with enslavement of human beings.  The Confederacy, they asserted, would stand as a corrective to this excess liberalism, and would use its conservatism, social hierarchy, and slavery to purify nationalism of the liberal impulses that had supposedly doomed it abroad.  Leonidas W. Spratt, editor of the Charleston Mercury, made this view clear in January of 1861, when he declared “if you shall elect slavery, avow it and affirm it . . . assert its right . . . to extension and to political recognition among the nations of the earth. If . . . you shall own slavery as the source of your authority . . . the work will be accomplished” and, further, “your Republic will not require the pruning process of another revolution; but poised upon its institutions, will move on to a career of greatness and of glory unapproached by any other nation in the world.”  To these Confederates, slavery was not just the defining element of the Confederacy; it was the legitimizing element that ensured the Confederacy would be the strongest nation the world had yet seen, with the purest implementation of nationalism.

Secessionists and Confederates thus used international perspectives as a convenient way to translate their concerns about protecting slavery into the international language of rights and nationalism.  The mid-nineteenth century Atlantic World was rife with questions about nationhood, citizenship, rights, and governance, and to secessionists, the Confederacy was simply the latest in a long line of aspiring nations seeking admission to the international family of nations.  Ultimately, contemporaries in the United States and in Europe largely rejected the Confederacy, both as a nation and as an equal to aspiring nations in Europe. In an intellectual and political atmosphere of growing abolitionism, a majority of Americans and Europeans recognized that a slavery-based nation did not echo the values of nationalism exhibited elsewhere.  Nonetheless, Confederates used international perspectives to defend slavery, and to try to legitimize their slavery-based nation.

Newest Born of Nations enhances our understanding of the Confederacy and the Civil War by reframing the American Civil War as part of the larger nineteenth century age of revolutions and nationalism.  Far from an exclusively domestic conflict, the Civil War had profound implications for the evolving nineteenth-century Atlantic World ideas of freedom, rights, citizenship, and nationalism.  Confederate nationalism developed in and through this international context.  Critically, Newest Born of Nations reveals that, despite the contradiction between slavery and the liberal ideals that resonated throughout the mid-nineteenth century Atlantic World, white southerners attempted to claim slavery as legitimate foundation for a self-governing republic.  Slavery was at the heart of the project of building an independent southern nation, and developing and deploying international perspectives was a key way that Confederates sought support and legitimacy for a nation built on slavery.

This internationalization of the making of the Confederacy reveals the development of southern nationalism to be a complicated, complex process, one fundamentally tied into the intellectual trends of the era, even as it opposed the growing trend of abolitionism and equality.  By placing secession, the Confederacy, and the American Civil War within this transnational context, Newest Born of Nations expands and complicates our understanding of the Confederacy, the Civil War, the age of nationalism and revolutions, and the nineteenth-century Atlantic World.