Unconditional Surrender: The Domestic Politics of Victory in the Pacific

Marc Gallicchio is Professor of History at Villanova University and the author of Unconditional: The Japanese Surrender of World War II, published by Oxford University Press, August 2020. 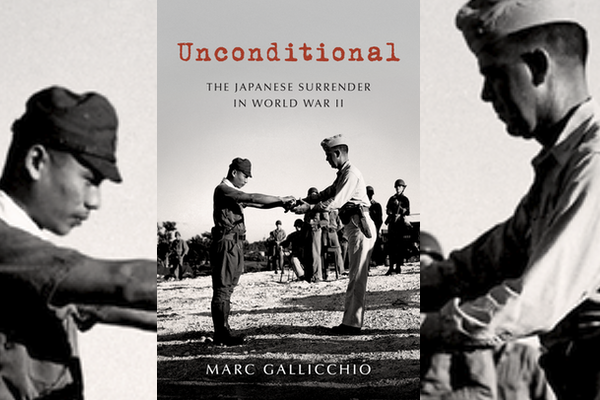 As we observe the 75th anniversary of the surrender of Japan, we should remember that the terms on which that surrender took place remain among the most contested issues of the war. Unconditional surrender was destined to be controversial because it was Franklin Roosevelt’s policy. A quintessentially New Deal program, its goal was the creation of economically broad-based democracies in societies predicated on conquest and the subjugation of other people.  Conservatives, who had long battled the New Deal, saw little reason to extend it to Japan. Following FDR’s death in April and Germany’s surrender in May 1945, they pushed for modification of unconditional surrender.

Undersecretary of State and former ambassador to Japan Joseph Grew, Secretary of War Henry Stimson, former president Herbert Hoover, and Admiral William D. Leahy, military advisor to both Roosevelt and successor Harry Truman,argued that Japan had been a cooperative U.S. partner during the 1920s and could become one again. Leahy, Stimson, and Hoover questioned the need for a full-scale occupation of Japan and predicted that American efforts to reform Japanese society would create chaos and turmoil and make the country ungovernable. They argued that once the militarists who had hijacked the government were eliminated, the prewar leaders, dubbed “moderates” or “liberals” would steer Japan back onto a civilized path.

The fate of the emperor was another point of disagreement. New Dealers saw the monarchy as a bastion of reaction that enabled Japan’s business and military leaders to oppress the country’s workers. Conservatives viewed the emperor as a figurehead, but one who could helpfully stabilize Japanese society in defeat. In short, New Dealers believed the sources of Japanese militarism had to be torn out by the roots. Conservatives thought some careful pruning would do the trick.

Drawing on their lengthy professional service in the upper reaches of government, Stimson, Grew, and Leahy believed they were better able to define the national interest than the politicians who were beholden to the whims of public opinion. The proletariat, the term Leahy used for the public, should not make policy. Stimson bitterly complained that advocates of unconditional surrender derived all their knowledge of Japan from Gilbert and Sullivan’s Mikado.  Hoover referred to advocates of unconditional surrender as a vengeful minority. Eventually, he would blame unconditional surrender on communist sympathizers who prolonged the war so the Russians could get in on the kill.

Grew, Stimson, Hoover, and Leahy thought a carefully crafted demarche might convince the Japanese to surrender. The place to start was with a public modification of American war aims. The most important “clarification,” the term preferred by conservatives, was one that assured the Japanese they could keep the emperor on the throne. That “clarification” just might tip the balance of power in Tokyo in favor of the moderates. But time was running out. The Russians were set to join the war in August. The American invasion of Japan was slated for November. Conservative advocates of “clarification” hoped to prevent the twin calamities of a Soviet occupation of Northeast Asia and a costly American assault on Japan.

FDR’s successor refused to cooperate. Despite steady pressure from Grew, Stimson and Hoover, Harry Truman stuck to unconditional surrender. Following a meeting with Truman in late May, Hoover encouraged Republican senators to take up the cause. Senator Homer Capehart (R-IN) asked why “we must destroy Japan’s form of government and then spend years in occupation and teaching a different form of government.” Kenneth Wherry (R-KS) and minority leader Wallace White (R-ME), likewise called for clarification of unconditional surrender and questioned the need to occupy Japan. They were supported by the conservative press. Time magazine publisher and Republican internationalist Henry Luce personally lobbied senators to support a statement “clarifying” unconditional surrender. Raymond Moley, a Roosevelt ally turned foe, wrote in the Wall Street Journal that the new president should tell the Japanese he had no intention of “interfering with the religious and social system which centers in the Emperor,” except to ensure that it did not promote aggression.

Truman was unmoved. Reporting on conditions within the administration, a Hoover confidant wrote that “Liberals and New Dealers” wanted to execute the emperor. More knowledgeable officials were warning of a protracted war if the U.S. insisted on destroying “Japan’s religious and political systems.” Truman refused to offer the emperor any guarantee. On July 26, the Allies warned the Japanese they faced prompt and utter destruction if they continued the war. The Japanese would not budge.

Contrary to what Hoover and the others claimed, Hirohito did not contemplate surrender. He sought a peace that would leave the monarchy unmolested and Japan’s political structure unchanged. Rather than approach the Americans, Hirohito tried to buy Soviet good offices by offering Joseph Stalin slices of Japan’s empire.

The end came swiftly in a series of world-shaking events. On August 6, the first atomic bomb was exploded over Hiroshima. The Soviets declared war on Japan on August 8. The same day, a second atomic device instantly killed 39,000 inhabitants of Nagasaki. The Japanese government finally offered to accept the terms of the Potsdam Declaration providing they did not impinge on the prerogatives the emperor. Stimson and Leahy urged Truman to accept. Instead, the president authorized a reply that made the authority of the emperor and the Japanese government, subject to the Supreme Commander for the Allied Powers.

It was a crucial distinction. Acceptance of the Japanese offer would have left the emperor’s considerable prerogatives intact and thwarted from the outset American efforts to reform Japanese society. Truman told Democratic senators Mike Mansfield and Warren Magnuson that he thought Hirohito was as guilty as Hitler and Mussolini. He was, however, willing to let the emperor to remain on the throne but only if he served American war aims.

Following the war, conservatives argued that the same arrangement could have been made if Truman had been willing to ignore the public’s demand for vengeance and abandoned FDR’s unconditional surrender policy. That was not so. Throughout 1945, Hirohito was unwilling to accept any limits on his traditional authority and any change to Japan’s political structure.

Hirohito became the figurehead that Grew and the others said he was, but only after he agreed to the unconditional surrender of Japan’s armed forces and the occupation of the homeland. Everything that followed, the disarmament of Japan, the reform of its economic, political, and social institutions, and the adoption of a new constitution, in other words, a New Deal for Japan, was preceded by Truman’s insistence on unconditional surrender.

The debate over unconditional surrender extended the ideological battleground of the New Deal into the international realm. Understanding that enables us to see how difficult it is to separate partisanship from foreign policy and reminds us that Americans did not abandon politics when they mobilized to fight the “Good War.”