Monopoly in the 20th Century: Roosevelt Warns of Concentrated Wealth and Fascism (Excerpt)

Thom Hartmann is a progressive national and internationally syndicated talk show host. Talkers magazine named him America's most important progressive host and has named his show one of the top ten talk radio shows in the country every year for over a decade. His book The Hidden History of Monopolies: How Big Business Destroyed the American Dream will be released on August 25. 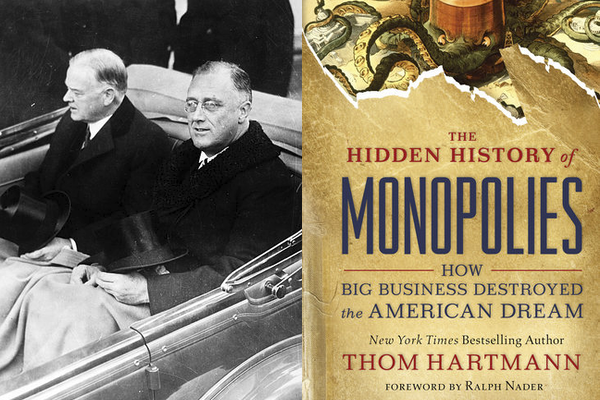 On April 20, 1938, the Associated Church Press—a group of reporters for religious magazines and newspapers—met with President Franklin D. Roosevelt in Washington, DC. One of their first questions was, “I would like to ask you, how great is the danger of fascism in this country? We hear about fascism-baiting in the United States.”

FDR’s answer was blunt, and it reveals a lot to us today of how Americans thought of “fascist” enterprises back in that day.

“I think there is danger,” he replied to the question, “because every time you have the breaking down or failure of some process we have been accustomed to for a long time, the tendency is for that process, because of the breakdown, to get into the hands of a very small group.”

He then spoke directly to the issue of centralized—and distant—ownership or control of business by powerful interests, in this case the banks in New York. FDR had polio as a child and was partially paralyzed from it, so he spent a lot of time in Warm Springs, Georgia, where people stricken by polio could float and lightly exercise in the warm, mineral-rich water. On several of his visits, he’d heard from the people who lived in Georgia that they weren’t happy with the way the “local” utility was refusing to extend electric power out to rural areas like the ones around Warm Springs.

“One of our southern states that I spend a lot of time in,” he said, giving an example to illustrate his point, “has a very large power company, the Georgia Power Company. There are a lot of people in Georgia that want to own and run Georgia power, but it is owned by Commonwealth and Southern in New York City…. Georgia has plenty of money with which to extend electric light lines to the rural communities, and the officers of Georgia Power Company themselves want it Georgia-owned or Georgia-run. But they have to go to New York for the money. If it were not for that, we would not have any utility problem, and all of them would be owned in the districts which they serve, and they would get rid of this financial control.”

But it wasn’t just that rural Georgia was being screwed by profit taking in New York and was powerless in the face of it. The controlling of electricity in Georgia by this for-profit, privately owned monopoly meant that rural Americans in that state would still have to light their homes with kerosene and couldn’t even turn on a radio.

It also meant that workers were often stripped of appropriate compensation for their work. “You take the new lumber companies that want to start on this wonderful process of making print paper out of yellow pine,” FDR continued. “One reason for the low wages of the workers in the pulp mills of Mississippi, Georgia, North Carolina, and South Carolina is that practically all profits go north; they do not stay south. If the profits stayed south, the whole scale of living would go up.”

And then he brought it all back to the word fascism, which the dictionaries of the day defined as the merger of state and corporate power, a process that was well underway in Italy— where Mussolini had dissolved the elected parliament and replaced it with the Chamber of the Fascist Corporations, where the Italian equivalent of each congressional district was represented by its largest industry instead of an elected member—and Hitler and Tojo had both moved to bring powerful business leaders and industrial tycoons into government.

“I am greatly in favor of decentralization,” FDR wrapped up his answer to that question, “and yet the tendency is, every time we have trouble in private industry, to concentrate it all the more in New York. Now that is, ultimately, fascism.”

Nine days later, President Roosevelt brought up the issue again in his April 29, 1938, “Message to Congress on the Concentration of Economic Power.”

Unhappy events abroad have re-taught us two simple truths about the liberty of a democratic people.

The first truth is that the liberty of a democracy is not safe if the people tolerate the growth of private power to a point where it becomes stronger than their democratic state itself. That, in its essence, is fascism—ownership of government by an individual, by a group, or by any other controlling private power.

The second truth is that the liberty of a democracy is not safe if its business system does not provide employment and produce and distribute goods in such a way as to sustain an acceptable standard of living.

Speaking of the captains of industry who, in the election two years earlier he had said, “hate me, and I welcome their hatred,” FDR laid out the state of things that three previous Republican administrations (Harding, Coolidge, Hoover) and their deregulatory fervor had brought about:

Among us today a concentration of private power without equal in history is growing.

This concentration is seriously impairing the economic effectiveness of private enterprise as a way of providing employment for labor and capital and as a way of assuring a more equitable distribution of income and earnings among the people of the nation as a whole.

Shifting from the rhetorical to the concrete, he gave a few startling examples:

Statistics of the Bureau of Internal Revenue reveal the following amazing figures for 1935:

Ownership of corporate assets: Of all corporations reporting from every part of the nation, one-tenth of 1 percent of them owned 52 percent of the assets of all of them.

And to clinch the point: Of all corporations reporting, less than 5 percent of them owned 87 percent of all assets of all of them.

And to clinch the point: Of all the manufacturing corporations reporting, less than 4 percent of them earned 84 percent of all the net profits of all of them.

FDR pointed out that the Republican Great Depression (what it was called until the early 1950s) had played a role in this process by weakening small businesses and often forcing them to sell out to larger interests or to mortgage themselves to big players, generally in distant cities.

The Republican policies he was noting produced vast wealth for a small number of monopolists and stripped workers of their wages and security. And the monopolists were, throughout the Roaring Twenties, using the Harding/Coolidge/Hoover deregulation of the marketplace to concentrate ownership of America’s productive enterprises in their own tiny hands. The peak of the trend had been in the summer of 1929, when the market was at its top.

“[I]n that year,” FDR told Congress, “three-tenths of 1 percent of our population received 78 percent of the dividends reported by individuals. This has roughly the same effect as if, out of every 300 persons in our population, one person received 78 cents out of every dollar of corporate dividends, while the other 299 persons divided up the other 22 cents between them.”

But it wasn’t just wealth in the form of stock and business ownership that was concentrating. As the circle of ownership of entire industries was becoming smaller and smaller, that increasingly powerful group of men (and they were all men) were able to redefine the workplace so they could take more and more out of the paychecks of their workers and keep it for themselves.

By 1936, FDR said, “[f]orty-seven percent of all American families and single individuals living alone had incomes of less than $1,000 for the year; and at the other end of the ladder a little less than 1 percent of the nation’s families received incomes which in dollars and cents reached the same total as the incomes of the 47 percent at the bottom.”

Ask “average men and women in every part of the country,” FDR said, what this concentration of wealth and its attendant political power meant. “Their answer,” he told Congress, “is that if there is that danger, it comes from that concentrated private economic power which is struggling so hard to master our democratic government.”

They were doing it through monopoly. FDR said that “interlocking spheres of influence over channels of investment and through the use of financial devices like holding companies and strategic minority interests” meant that “[t]he small businessman is unfortunately being driven into a less and less independent position in American life.”

Big business, the president said, while “masking itself as a system of free enterprise after the American model . . . is in fact becoming a concealed cartel system after the European model.”

He wrapped up the speech with a specific call to take on monopoly in America. It was a call that echoed through the next three decades. “Once it is realized that business monopoly in America paralyzes the system of free enterprise on which it is grafted,” FDR said, “and is as fatal to those who manipulate it as to the people who suffer beneath its impositions, action by the government to eliminate these artificial restraints will be welcomed by industry throughout the nation.”

Reprinted from The Hidden History of Monopolies with the permission of Berrett-Koehler Publishers. Copyright © 2020 by Thom Hartmann.