Simon Jenkins is author of the international bestsellers A Short History of England and A Short History of Europe. He is a former Editor of the Evening Standard and The Times, and is currently a columnist for the Guardian. He has served on boards involved in London's transport, housing, arts, and conservation. He has lived in London since infancy, in four of its boroughs, three of them north and one south of the river. 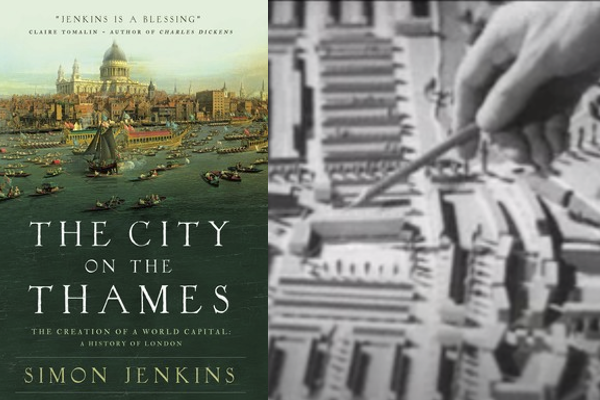 In 1942, at the height of the Second World War, the British government published a plan for the destruction and rebuilding of whatever of London was left standing after German bombing. The ambition compared with Albert Speer’s ‘Germania’ proposal for a new Berlin. War is kind to planners. The London proposal came from one such, Patrick Abercrombie, who saw the metropolis as essentially outdated. The Blitz was an opportunity to start afresh.

Abercrombie’s patrons in Whitehall were receptive to his enthusiasm for the ideas of the Modernist architect le Corbusier. A new London should be truly new. Apart from a few national monuments and a scatter of so-called ‘villages’, the new city would be encircled by five ring motorways, driven across a landscape of towers and slabs. This was later elaborated by Colin Buchanan, a traffic engineer who advocated pushing all human movement onto first-floor pedestrian decks, while the land surface below was given over to basements and roads. He dubbed it a city ‘fit for the motor age.’ This was duly accepted as the official plan for London.

Most cities have their moments of trauma, of siege, invasion, rebellion or fire. London has had remarkably few, shielded as it is from a turbulent Europe by its island location. An early trauma came in AD410, when the Romans retreated from empire and abandoned the old city completely. The surviving population decamped upstream to the Aldwych for at least a century. Eventually, Anglo-Saxons gave way to invading Danes and then to Normans. London has always been a city of immigrants.

In the 11th century, the Anglo-Norman monarch Edward the Confessor based his court at Westminster, well away from the English-speaking Londoners, whom he distrusted. The law, the army and government followed, and London evolved as two separate capitals, one of power, the other of money. They have remained governmentally separate to this day, in perpetual and creative tension.

The next trauma, the great fire of 1666, destroyed almost all the ancient City, always given a capital C. It drove half the population into Westminster and the suburbs. Since London had no need of fortifications, this sprawl was unchecked. Manufacturing and shipping were relocated off-centre along the Thames, while the old City rebuilt itself for a new purpose, as home to commerce and finance. Westminster became a courtly suburb, a place of great houses, fashion, scholarship and entertainment, home to Wren, Pope, Handel, Samuel Johnson and Georgian architecture.

Landowners turned property developers, creating a patchwork of brick and stucco streets and squares that were the envy of Europe. These leasehold estates echoed their owners’ names, Grosvenor, Cavendish, Berkeley, Portman and Harley. As London spread ever outwards, townhouses gave way to villas and semi-detached parks, to Holland Park, Maida Vale, Hampstead and Sydenham.

London certainly had its slums, and during the 1740s was hit by a plague of gin drinking similar to the drug epidemics of today. But few districts were as bad as the crammed tenements of Paris or Vienna. The chief reason was the availability of land and the lack of control over building on it. Londoners would boast, with a grain of truth, that even the poorest workers had houses with their own front doors. The price paid was in congested roads and long journeys to work. But the answer to that came in the 1840s with the arrival of the railway, above and below ground. By law, workman’s trains had to be as cheap as a penny a ticket.

Throughout its history, London was a metropolis with no government. The City retained a medieval constitution of a mayor and alderman, while the rest was administered by dozens of local parishes, inherited from the once rural surrounding counties. The metropolis was built on anarchy. One result is that London lacks the ceremonial spaces and grand boulevards of most capital cities. Its parliament, palaces, museums and churches are tucked away as if deliberately inconspicuous. Karl Marx complained that there was nowhere in London to put a riot.

Not until 1855 was a metropolitan board created for water and sewerage, largely born of a series of cholera outbreaks. Policing was near non-existent. Schools were left to the church. Rudimentary attempts to reform slum housing came from charities, such as those of Octavia Hill and championed by Charles Dickens. Even railways were left to market forces, hence London’s chaotic rail map.

The formation of a London County Council in 1888 and then of metropolitan boroughs – such as St. Marylebone, Islington and Stepney – brought this absurdity to an end. Suburban high streets blossomed in redbrick town halls, schools, libraries and public baths, most dating from just twenty years around the turn of the 20th century. But while sanitation and building materials were regulated, there was still strategy for London’s overall development.

Hence the drama of Abercrombie’s proposed revolution. Most of Europe’s shattered post-war cities sought to repair their bomb damage as fast as possible. The new Munich, Nuremburg, Dresden and Warsaw were to look much like the old. But in the communist east, victory licensed a new age of urban living, state-owned and state-ordained. This appealed to a new generation of architects and planners, steeped in the collectivist modernism of le Corbusier. This found an echo in Britain’s Labour movement, now running both London and the central government.

The hurdle was that Abercrombie’s dream was hopelessly expensive. London had no time to wait. His inner ringway alone would destroy more houses than were lost in the Blitz. Modern buildings did appear where bombing had been heavy, as around St Paul’s and the Barbican, along the Thames and in Stepney. Today’s visitor can still make out what I call Abercrombie’s ghosts, random towers dotted over intended motorway intersections, as at either end of Tottenham Court Road and opposite Victoria station.

As after the Great Fire of 1666, London could not wait for dreams. Private developers and local boroughs built wherever sites lay vacant. Historic conservation pressure also grew, such that by the 1970s fierce resistance arose to urban motorways and to the imminent demolition of Piccadilly Circus, Whitehall, St. Pancras and the Covent Garden district. Covent Garden was formally ‘saved’ in 1973, and Abercrombie ground to a halt. Today few Londoners realize how close their city came to a devastation out of all proportion to what had been suffered in the war.

The legacy of these years was not a more careful or sensitive London plan. If anything it was the opposite, a reversion to the open market that had prevailed throughout history. Outside designated conservation areas–covering roughly half of inner London—building heights and zoning fell vulnerable to political corruption. Houses fell and towers rose wherever a lobby intervened, be it a Hilton hotel, Shell Oil, a bank or a Malaysian tycoon. No London vista is unscarred by an ugly tower.

The resulting texture of the metropolis has a diversity of buildings unlike any other. It has corners of charm and beauty, others of ugliness. What is clear is that London has retained its overall vitality and magnetism. One third of its population was born abroad, and it has the youngest working population in Europe. As I write this, it is facing another historic trauma, that of a pandemic that has emptied its hotels and offices. I can only recall that it has survived such trials before.

Editor's Note: The Internet Archive hosts The Proud City, a film promoting Abercrombie's modernist plan for a comprehensive rebuilding of the metropolis. Readers are encouraged to view it.