Hao Zou is a graduate student at Stanford University. He studies Chinese American history, immigration, race and ethnicity, and the American West. 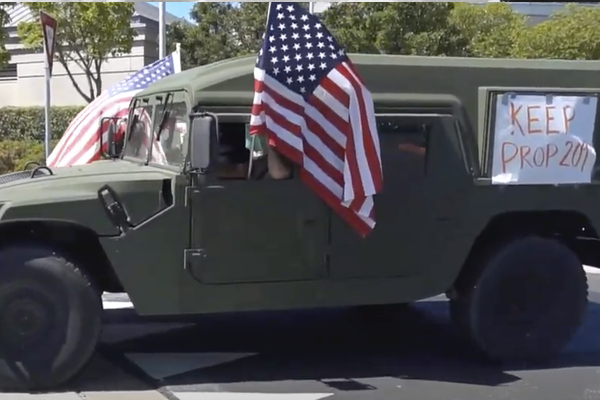 Nationwide Black Lives Matter protests over the past several months have rejuvenated fights against ongoing racism. A surge of harassment and assault against Asian Americans during the pandemic signifies the recurrence of xenophobia and racial animosity. The racialization of Covid-19 as the “Chinese virus” awakens the dormant yellow peril trope. Meanwhile, a group of Chinese Americans, mostly first-generation immigrants, have been organizing flag-flying, placard-displaying car rallies in the Bay Area and southern California, protesting Proposition 16—a ballot measure that aims to restore affirmative action in California.

In the late 1960s and early 1970s, a group of Chinese American social activists, inspired by the civil rights movement, contested surface equality in American courts. Lau v. Nichols is a landmark case wherein limited-English-speaking students of Chinese ancestry in San Francisco alleged the denial of equal educational opportunity by the school district due to the lack of bilingual education. The United States Supreme Court ruled in 1974 that “there is no equality of treatment” without adequate bilingual education, the “effect” of which constituted discrimination. Mandating “different treatment,” the court directed the school district to “take affirmative steps to rectify the language deficiency” for racial minority students. As direct beneficiaries, Chinese American students enjoyed the benefits of these structural improvements.

In a more open and equal social milieu, a growing yet diverse Chinese American community emerged. The ethnic Chinese population almost doubled in the 1970s as a result of the Hart–Celler Immigration Act of 1965. This more liberal immigration law favored immigrants seeking family reunification and those with professional occupations. Many Chinese Americans with professional skills and capital rode the wave of opportunity in the post-civil rights era to achieve socioeconomic success, whereas the majority of new immigrants who came for family reunification struggled in urban poverty. Public perceptions of a successful minority group rising from historical discrimination overlooked the vast intragroup socioeconomic divisions.

Re-emerging in the 1980s, the model minority myth portrayed Asian Americans as an example of self-sufficiency and individual achievement. In contrast to the structural interpretation, the cultural rhetoric that emphasized familial and cultural attributes dominated the public view. Many middle-class and wealthy Chinese families welcomed the illusory rhetoric because it fit in well with traditional values and beliefs that the parents had carefully maintained to nurture their children. This cultural discourse functioned as a powerful force informing Chinese Americans’ understanding of equality.

The positive stereotypes soon backfired. Public perceptions of Asians as disproportionately successful in American society drove a growing amount of anti-Asian resentment. The once positive portrayal of Asian students was repositioned to depict them as monotonous and lacking character and leadership. In order to curtail rising Asian American and declining white enrollments, UC Berkeley made several undisclosed admissions policy changes in the mid-1980s that disfavored Asian applicants. After discovery and investigation by a coalition of Asian American community organizations and further pressure from state government agencies, Berkeley Chancellor Ira Michael Heyman apologized twice and publicly acknowledged the university’s discriminatory policies.

With the disputes barely settled, anti-affirmative action politicians moved in quickly to exploit the Berkeley situation by targeting race-based policies in general. Historian Dana Takagi argues that the political manipulation shifted the focus of discourse from anti-Asian racial discrimination to the faults of affirmative action. Elaine Chao, then U.S. Deputy Maritime Administrator, wrote a 1987 op-ed in Asian Week, connecting the racial quotas against Asian Americans in Berkeley’s admissions process to the university affirmative action programs for underrepresented minorities. Other conservative politicians and intellectuals joined the fray to reinforce the conflation.

The heightened conflation of anti-Asian racial discrimination and race-based policy manifested in Ho v. San Francisco United School District (SFUSD). The SFUSD had implemented court-mandated racial caps in public schools to achieve school integration since the 1980s. In the 1990s, the racial caps’ negative impact on ethnic Chinese students, who faced the highest score cutoff among all racial groups to qualify for admission to a top alternative high school, became more pronounced. Several ethnic Chinese students filed a class-action suit against the school district alleging that the imposed racial caps constituted racial discrimination. The lawsuit found impassioned support from anti-affirmative action Chinese Americans who ignored the mandatory nature of public education and equated the racial caps with affirmative action. This resentment of race-based policies dovetailed with the conviction in the cultural rhetoric, forging a specious argument among some Chinese Americans in support of colorblind policies.

This stance has resonated with many newly arrived Chinese immigrants. These well-off suburban dwellers, most of whom work as professionals, rushed to adopt a misguided position that suppresses race as an essential element in American social relations. Even the pandemic failed to shake their belief in the model minority myth and subdue their passion for protesting Prop. 16. Little wonder that the car rally organizers are part of a broader coalition that supports a recent suit against Harvard, whose political repercussions recall the Berkeley admissions controversy.

The past never vanishes. But what the past really entails for our present depends on an accurate and nuanced interpretation of it. The revival of the racist and anti-immigration narratives around the “Chinese virus” attests to the illusion of a colorless society. Deeply rooted in the history of the United States, racism and xenophobia never go away. In a society where people still believe in racial hierarchies, even a “model minority” group runs the risk of being accused by the racial superior as a threat, whether in the form of university overrepresentation or disease carrying. Over the years, race-conscious policies have induced profound change in institutions, bringing about structural improvements. Nevertheless, until racial hierarchies are shattered, racial discrimination persists regardless of how a racial minority group is ranked along the racial hierarchy.