James M. Pitsula is Professor emeritus in the Department of History, University of Regina (Saskatchewan). 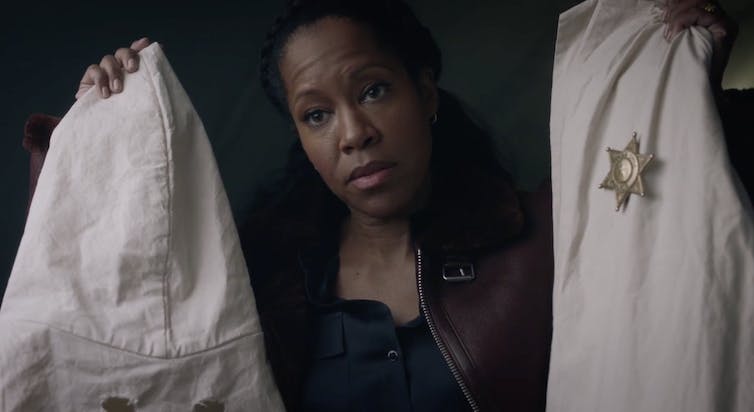 The HBO show Watchmen, which won 11 awards at the 72nd Emmy Awards held Sept. 20, has used science fiction and the superhero genre to probe white supremacy, police corruption, trauma and institutional racism across time. The show, a “re-mix” based on the original Watchmen comic series engages the subject of policing and the Ku Klux Klan.

Beyond Watchmen, the Klan may be most familiar to some contemporary Canadians through its high-profile American and Hollywood portrayals.

But as I trace in my book Keeping Canada British: The Ku Klux Klan in 1920s Saskatchewan, the Klan also existed in Canada, first appearing here in 1921. And nowhere else in Canada did the Klan achieve the influence it attained in Saskatchewan — where it helped bring down a government.

In 1866, immediately after the American Civil War, a group of ex-Confederate soldiers in Pulaski, Tenn., formed an organization called the Ku Klux Klan, after the Greek word “kuklos,” which means circle.

The Klan propped up white racial supremacy by means of violence and intimidation, including beatings, torture, sexual assault and murder. The Klan faded out in the 1870s, but was revived in 1915 when a small group of men gathered at Stone Mountain outside Atlanta, where before an altar beneath a fiery cross they swore allegiance to the Invisible Empire Knights of the Ku Klux Klan.

By the fall of 1921 there were 100,000 members in the United States. The peak membership is estimated at three million to six million (or higher) in the 1920s, but the precise number is not known because the records at Atlanta headquarters were destroyed.

The Klan’s first appearance in Canada was in 1921, when branches were formed in Montréal and West Vancouver.

Cross burnings were sighted in various locations, for example, in Fredericton, N.B., at the Mount Saint Vincent convent in Nova Scotia, and at the St. John the Baptist Roman Catholic church in Melville Cove, near Halifax. The Klan reported as many as 7,000 enrolled just in the Toronto chapter, although as political scientist Allan Bartley notes this claim may be exaggerated.

He finds the Klan “initially exercised its strongest appeal in southwestern Ontario,” where Black people were “targets of rising racism.” But “the Klan also exploited traditional Protestant animosities against Catholics and French Canadians. There were diatribes against Blacks, Jews and foreigners, and avowals of respect and loyalty to British traditions and institutions.”

In Ontario and elsewhere in Canada, the Klan advanced its capacity to exploit local prejudices against those who didn’t fit neatly into moulds of British Protestant Canadian nationalism. 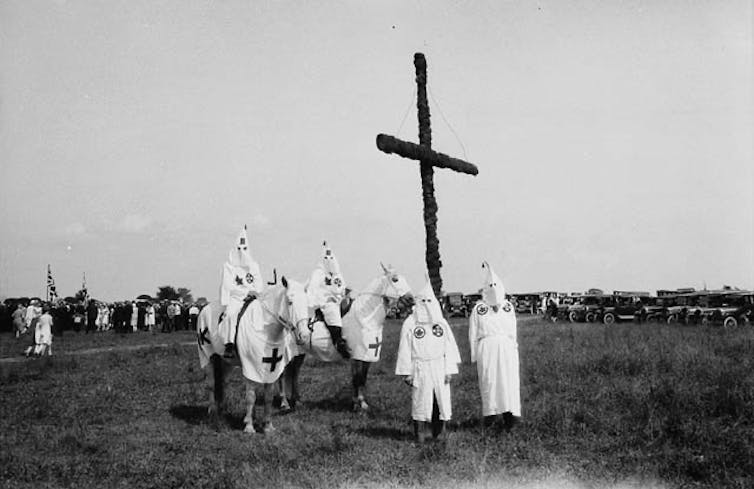 Klan organizers Lewis Scott and Pat Emmons, both from South Bend, Ind., arrived in Saskatchewan in late 1926. They preached white supremacy, and to that extent the message was the same as it was in the United States. But the message was tailored to local conditions.

The 1931 census showed that for the first time since Saskatchewan was established as a province, people of non-British origin formed the majority of the settler population. There was a small Black population in Saskatchewan, and a growing number of immigrants from central and Eastern Europe.

For many British Protestants, who fashioned themselves as rightful “nativists,” it seemed that “foreigners” were taking over the country. Combined with this was a desire to preserve their traditional gender and moral order.

Votes for women and more women in the paid work force, women smoking or bobbing their hair suggested that gender roles were changing. The Klan did not want this, partly because they thought that controlling women’s sexuality was essential to keeping the white race pure.

Saw themselves as ‘moral arbiters’

The 1920s was also the era of prohibition of alcohol, a regime that was difficult to enforce. There was also a general anxiety about prostitution, opium and gambling all of which were disproportionately blamed on the non-British population. 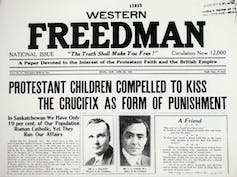 The April 5, 1928, issue of Western Freedman, a publication directed by J.J. Maloney, who was affiliated with the Knights of Ku Klux Klan. (Wikimedia/Saskatchewan Archives Board, R-A6902)

They saw the Klan as a bulwark against the moral collapse of society. Canadians had fought in the First World War in large part for the British Empire, and its fresh psychological wounds influenced the rise of right and fascist politics.

The Klan declared that Canada must not allow what had been won in the trenches of Belgium and France to be lost on the plains of Saskatchewan. For all these reasons, the Klan took off like wildfire, signing up an estimated 25,000 members in the province.

One notable event was a huge rally and cross burning outside Moose Jaw on June 7, 1927. An estimated 8,000 people attended the rally. Newspaper reports of the time estimated more than 1,000 automobiles at the scene. On Empire Day, May 24, 1928, crosses burned in communities across the province.

In September 1927, Klan organizers Emmons and Scott fled the province, taking with them money they had collected for membership fees and from the sale of Klan regalia. Emmons was brought back and put on trial for embezzlement, but acquitted because he had acted in accordance with Klan rules. 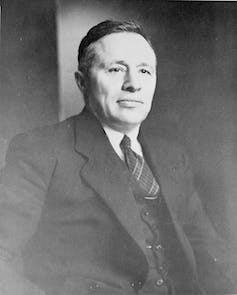 Gardiner lost the election of 1929 partly because of backlash to his anti-Klan crusade. (Alexandra Studio/Library and Archives Canada/PA-052491)

At this point the Saskatchewan Klan might have collapsed, but instead it restructured itself as a locally run organization. All ties with the American Klan were severed. Robes and hoods, part of Klansmen’s or Klanswomen’s garb, were no longer worn in public.

The new locally run Klan explicitly emphasized that it rejected violence and its main purpose was to keep Canada British and follow constitutional methods to achieve that goal. But cross burnings, verbal attacks on the non-British and explicitly racist pronouncements were, if not physically violent, hateful and deeply intimidating.

Liberal Premier Jimmy Gardiner, continued to attack the Klan, saying that it was an alien American import and that it had left a trail of bloodshed everywhere it went in the U.S. However, he was unable to cite specific instances of bodily violence perpetrated by the Klan in Saskatchewan. Gardiner lost the election of 1929, the first defeat for the Liberals since 1905, partly because of the backlash against his anti-Klan crusade. 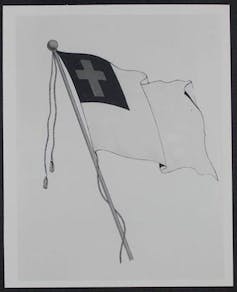 Christian flag (Protestant), From ‘Women of the Ku Klux Klan, a Catalogue of Official Robes and Banners,’ ca. 1928. (Provincial Archives of Saskatchewan/R-A12825-1)

Gardiner’s own archives are significant textual sources for documenting the Klan in Saskatchewan. Both Gardiner’s collection of newspaper clippings and his correspondence provide insight into this strange and complex history.

Gardiner, who began his career as a teacher and was a Protestant, stood against the Klan’s hateful expression of an idealized exclusive white British Protestant social order.

At the same time, his archives, as well as many other sources, show how there was an atmosphere of accepted racist discourse and legally established stuctural racism. Such laws pertained to and impacted both colonial settler relations with Indigenous peoples and non-British racialized groups.

Gardiner had to walk a line of being anti-Klan: He couldn’t denounce the clan in frankly anti-racist terms, because there was so much racism in the general population including among his own supporters. He mainly denounced them because they had originated in the U.S. and for their blatant hucksterism.

Lest Canadians believe that the Klan was only an American phenomenon, it’s important to critically examine our own histories and legacies — including the many waves of white supremacist activity — and levels and nuances of structural racism.