My Memories of Voter Suppression 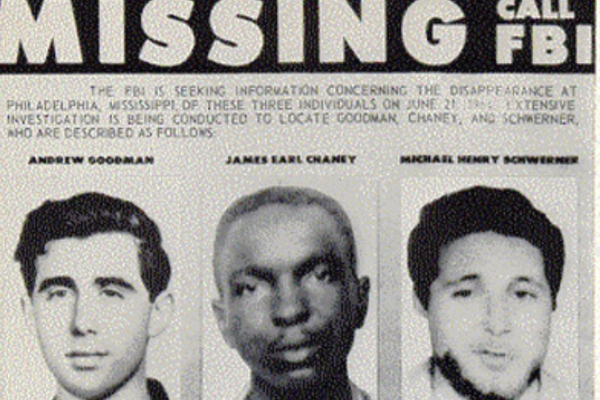 Andrew Goodman, James Chaney and Michael Schwerner were murdered in 1964 for their efforts to secure Black voting rights in Mississippi.

The author joined an interracial movement for voting rights in Louisiana in the years before.

Back in July 1962, when, according to Donald Trump, America was “great,” I was in the Deep South, working to register Black voters.  It was a near-hopeless project, given the mass disenfranchisement of the region’s Black population that was enforced by Southern law and an occasional dose of white terrorism.

It all started in the fall of 1961, the beginning of my senior year at Columbia College.  My roommate (Mike Weinberg) and I, both white, had joined the campus chapter of the Congress of Racial Equality (CORE) and participated in a few of its New York City projects.  The real action, though, was in the turbulent South, swept by sit-ins and Freedom Rides that demanded an end to racial discrimination and, especially, the right to vote.

On an evening in the spring of 1962, Ronnie Moore, a Black CORE Southern field secretary, brought the news of the Southern freedom struggle to our Columbia CORE meeting.  Having headed up desegregation efforts in Baton Rouge, Louisiana, Ronnie and three other students at Southern University, an historically Black institution, were out on bail on “criminal anarchy” charges.  The laws under which they were charged and imprisoned, which provided for a penalty of ten years at hard labor and a hefty fine, dated back to the state’s early twentieth century repression of union organizing among Black and white timber workers.

Stirred by what Ronnie told us, Mike and I went up to him after his talk and asked him how we could help the cause.  Looking us in the eyes, he said, smiling: “What are you boys doing this summer?”  In reply, we explained that, inspired by Jack Kerouac’s On the Road, we would be driving around the country.  “Any chance that you’ll get to Baton Rouge?” he asked.  “We could manage it,” we said.  “Well, do it,” he remarked, adding: “Maybe we could arrange to get you arrested!”  We all had a good laugh about that.

That July, as Mike and I drove along Louisiana roads enveloped in an atmosphere of racial segregation, racist remarks, and unbearably hot and steamy weather, the venture no longer seemed quite as amusing.  Nor, after arriving in Baton Rouge, was it easy to find Ronnie, for the Congress of Racial Equality wasn’t listed in the phone book.  But we did find a Committee on Registration Education, and figured that, with the same acronym, that must be his group.  It was.  The state authorities had obtained a court order to shut down its predecessor.

When we arrived at CORE’s tiny office, Ronnie was delighted to see us and, together with his coworkers, took us to an all-Black hangout for coffee.  In his view, and ours, the only safe people in the South were Black.  As for local whites, we considered them all actual or potential Nazis, and stayed clear of them and their institutions.  Whether they would stay clear of us remained uncertain.  Mike and I slept on the Moore family’s entry hall floor, and local residents had been known to fire bullets into it through the front screen door.

Although most of the voter registration campaign Mike and I worked on in Baton Rouge was rather mundane, one evening was particularly exciting.  At dinner time, Ronnie suggested that we drive over to Southern University, from which he and the other CORE activists had been expelled for their “crimes.”  As we entered the all-Black dining hall, students started yelling: “It’s Ronnie!  It’s Ronnie!”  Hundreds of students swiveled around and cheers rent the air.  Leaping onto one of the tables, Ronnie made an impassioned speech about the freedom struggle and, then, announced that he had brought with him two movement supporters from the North.  “Get up here, Larry and Mike!”  So we jumped up there, too, and did our best to deliver strong messages of solidarity.  We had just about finished when someone rushed in, warning that the campus security police were on their way and that we had better get out of there fast!  While students ran interference for us, we did.

One day, Ronnie suggested that Mike and I drive him to Jackson, Mississippi, where a region-wide CORE-SNCC conclave would be held at the local Freedom House.  Accordingly, after dinner, we hit the road through northern Louisiana (where a local gas station operator threatened to kill us) and, then, through Mississippi to Jackson.  Here, in an abandoned building taken over by the movement and around which police cars circled menacingly, we joined dozens of CORE and SNCC activists from the Deep South.  At night, they had lengthy political discussions, in which they expressed their bitterness toward the Kennedy administration for its failure to back civil rights legislation or to protect movement activists from racist violence.

During the days, Mike and I joined Luvaughn Brown, a Black activist recently incarcerated at the county prison farm, to go door to door in a Black Jackson neighborhood and encourage its residents to register to vote.  This was a tough job because people feared retaliation if they dared to exercise their voting rights and, also, because they would almost certainly be rejected.  At the time, Mississippi used a “literacy test” to determine if a citizen was qualified to vote.  A voting registrar would ask a potential registrant to define the meaning of a section in the lengthy state constitution.  If you were Black, the registrar announced that you had failed the test; if you were white, you passed.

Voter registration work was not only frustrating, but exceptionally dangerous.  The following summer, Medgar Evers, head of the local NAACP, was murdered in Jackson by a white supremacist for his leadership in a voter registration campaign.  The next June, James Chaney, Andrew Goodman, and Michael Schwerner—participants in the Mississippi Freedom Summer voter registration project—met a similar fate.  Although rattled by our fairly brief Southern venture, Mike and I escaped with our lives, as did Ronnie.

Mike and I kept in touch, and were delighted when Congress responded to the scandal of Southern voter suppression with the Voting Rights Act of 1965, which outlawed the discriminatory voting practices of the past and established federal oversight of any new voting procedures in the offending states.

Imagine, then, our sense of sorrow, mingled with disgust, when, in 2013, by a 5-4 vote, the Republican-dominated U.S. Supreme Court gutted the Voting Rights Act.  This opened the door for numerous Republican-controlled state governments—many but not all Southern—to implement mass purges of their voter rolls, closure of polling places in minority neighborhoods, government ID requirements, felony disenfranchisement, and other barriers that deprived millions of Americans of the right to vote.

I wonder how Republican leaders can live with themselves when they betray the most basic principle of democracy.  Of all the things they have done during their time in power, this is surely one of the most despicable.