Former attorney Greg Bailey is the author of the soon to be released The Herrin Massacre of 1922: Blood and Coal in the Heart of America. 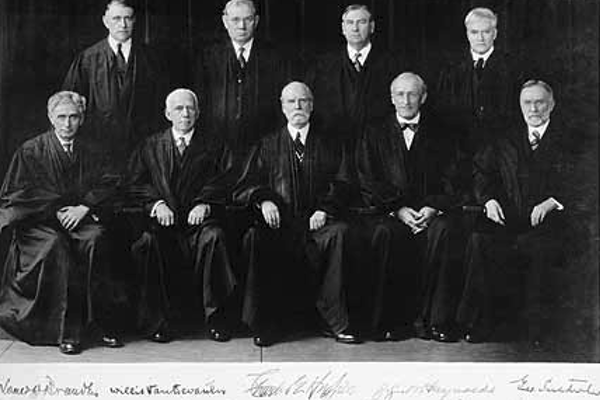 With the glaring exception of the Japanese American internment, no president ever had a string of better ideas and programs than Franklin Delano Roosevelt. He saved capitalism in spite of itself, reformed and resurrected the economy, strengthened the power of labor through the Wagner Act, softened the burdens of old age and remade America for the better, perhaps more than any President aside from Lincoln. Just as none of us are perfect inheritors of our family heritage so too is the United States an imperfect vision of Roosevelt’s New Deal. Modern America still lives in his shadow.

At many points in his administration his efforts were stymied by the U.S. Supreme Court, a body made up of followers of those who had driven the country into the ditch, in case after case striking down programs challenging economic regulations and reforms. After seeing some of his best ideas to help the American people shot down, FDR floated the idea of adding a Justice for each sitting Justice over the age of 70 who did not retire with a full pension, up to a limit of six additional Justices. In other words, it would have created anywhere from zero to six new seats of the court depending upon the choices of the current members of the court, while coercing his judicial antagonists to retire. His proposal was widely denounced by both Democrats and Republicans as “court packing” and entered history as a footnote of one of his only misjudgments.

But while FDR’s proposal to add Justices had a certain Rube Goldberg quality the idea of adding or subtracting Justices on the court was not a new or unusual prerogative of Congress. The U.S. Supreme Court began with six members. Then Congress reduced it to five, then restored it to six, then increased it from seven to nine to ten before going back to seven. In 1869 the number was set at nine where it remains today. The original plan was to have two Justices for each Court of Appeals, the courts one layer below the high court. Today there are eleven circuits made up of states and territories plus one for federal cases and another for the District of Columbia. The thirteen circuits are still on paper assigned to Supreme Court Justices in an obvious mismatch.

The circuit courts of appeals have varying numbers of judges. The first circuit, basically New England, has six judges. The ninth, which includes California, the West Coast, Alaska and Hawaii, has 29. Most of the others are in the 12-15 range. The usual procedure is for the cases to be heard by three judge panels. On occasion the court will order, or the parties request an en banc hearing, where all or most of the judges hear cases in a large group. The number of judges can vary from place to place but eleven or fifteen judges can meet in a courtroom to hear and later decide cases. The point is that it is more than nine and it still manages to function. There is no reason why the Supreme Court cannot and should not have more than nine members. Many if not most Justices worked in the circuit courts and have experience hearing cases with more than eight others sitting next to them on the bench.

Congress has the power under the Constitution to increase or decrease the seats on the court and to create or abolish any lower court. But why should it, and more pointedly why bring it up now?  The tragic death of American hero Justice Ruth Bader Ginsberg created a vacancy on the court, six weeks before the election. Literally before her body was cold and before the services to mark her passing, the current (and hopefully temporary) occupant of the White House expressed with glee his intention to appoint a successor as soon as possible, six weeks before the election. Senate majority leader Mitch McConnell immediately expressed his determination to confirm whoever was named before the congressional term expired, if not sooner, in a complete reversal of his refusal four years ago to grant a hearing or vote for Merrick Garland who was appointed to the Supreme Court by President Barack Obama ten months before the election. On October 26, the Senate confirmed nominee Amy Coney Barrett with no Democratic votes. Pointing out the hypocrisy is a waste of time when the hypocrite has no moral compass, no integrity and no shame. He doesn’t care and never will.

If enough Republican senators had found some decency within themselves, some sense of the ethical behavior or reciprocity upon which governing depends, there would be little reason to alter the court at this time. But the choice by a Republican bloc representing a minority of the country to ram through a nominee means a new Congress must embrace the corrective action of expanding the court or amending its jurisdiction next January. It would not be “court packing.’ It would be justice.