Priya Satia is Raymond A. Spruance Professor of International History at Stanford University and the author of  the recently published Time’s Monster: How History Makes History. 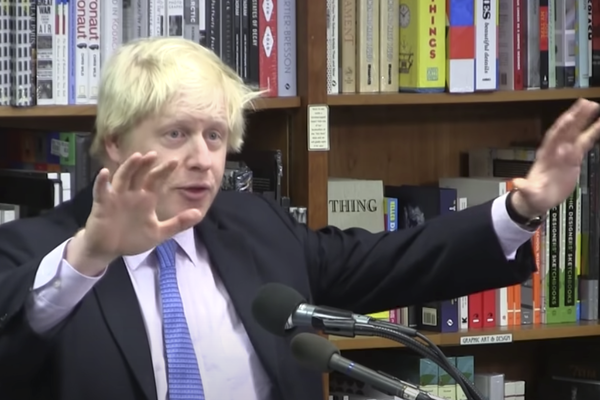 Boris Johnson discusses his The Churchill Factor at Politics and Prose, Washington, 2014

Popular desire to reckon with the legacies of empire is stirring a host of conversations in Britain, as in America and elsewhere, about statues, reparations, museums, and apologies. The Boris Johnson government, however, is stymieing these attempts to understand the past and to make new history through that understanding. Besides issuing directives to museums and schools against engaging in such dialogue, it has declared itself against the bogeyman of “critical race theory” and the very idea of white privilege. Instead the government propagates, in almost caricature form, the very Churchillian ethos critics of empire seek to lay to rest. This is a clash between a twenty-first century and a Victorian understanding of how history works.

The prime minister is, famously, an admirer of two imperial leaders, Winston Churchill and Benjamin Disraeli, known for their particularly unapologetic attitudes towards empire. A biographer of Churchill, Johnson has tried to imitate his life as a politician-historian fulfilling his own great-man understanding of history. The leader of the House of Commons, Jacob Rees-Mogg, is the author of an equally nostalgic collection of biographies, The Victorians: Twelve Titans Who Forged Britain (2019). This nostalgia, based on denial of the violent and racist reality of the imperial past, is also policy, according to a report on “Renewing UK Intervention Policy” commissioned by the Ministry of Defence on Britain’s post-Brexit role in the world: “Because of its imperial past, Britain retains a tradition of global responsibility and the capability of projecting military power overseas.” A study this year showed that Britons are more likely than people in France, Germany, Japan, and other former colonial powers to say they would like their country to still have an empire.

Domestic policy also strives to recreate glories of the past. In his address at the Conservative Party conference last month, Johnson promised a post-pandemic transformation akin to the “new Jersualem” Churchill’s government pledged in 1945. Sprinkling his vision of social care with more Churchillian rhetoric about the “magic of averages,” he said the UK was and would be “the greatest place on Earth”—a proleptic “greatness” that lies in its very refusal to let the pandemic limit its hope for future greatness.

Johnson’s supporters hailed this summoning of the “spirit of Churchill.” Another biographer of Churchill and other “great men,” Andrew Roberts enlarged on the analogy, arguing that, like his idol, Boris too would show the “Moaning Minnies”—presumably those preferring that he share plans for the pandemic now rather than indulge in his “usual bluster.”

Johnson’s Churchillian genuflections and promises of homes, electric cars, internet, and British-only citizenship for all emerge explicitly from his vision of history as a narrative in which destructive episodes “trigger…social and economic change” in a positive direction, a vision of history as progress, in which even seemingly painful events like war, famine, and pandemics must be stoically tolerated as the gears of that progress.

Until the late twentieth century, this Victorian idea of history was Britain’s “school of statesmanship,” as J. R. Seeley styled it: This was the “history boys” culture whose waning days Alan Bennett captured in his 2004 play. It is the culture that drove the scorning and imprisonment of conscientious objectors in the First World War—those who prioritized their private moral obligations over their obligation to history. Churchill was the apotheosis of the historically-minded statesman, committed to the idea of history as progress in which the role of great men was to suppress ordinary moral compunctions about destructive events that forwarded it. A review of two new Churchill books this month closes with George Eliot’s pithy summary of this understanding of history: “The important work of moving the world forward does not wait to be done by perfect men.” In this view, it is precisely their position beyond ordinary morality that makes great men the makers of history. Thus, Churchill led Britain in its finest hour but also presided over famine in Bengal and the firebombing of Germany.

This is precisely the view of history that enabled the imperial violence and racism that so many in Britain and around the world want to see acknowledged. Churchill suppressed pangs of conscience even when progress required wiping out entire peoples: “I do not admit…that a great wrong has been done to the Red Indians of America or the black people of Australia…by the fact that a stronger race…has come in and taken their place,” he affirmed in 1937. In fact, history itself shows that history is not a story of progress, as persistent global inequalities and the present climate crisis make undeniably clear.

Even in Churchill’s time, the violence of the world wars drove many to question that assumption. Critical British historians from Herbert Butterfield to E. P. Thompson pushed back against this “Whig Interpretation of History,” arguing that the purpose of life was not something far in the future but here and now and that we ought not to judge the actions of people in the past solely based on whether they were justified in light of what followed. Anticolonial thinkers around the world disputed the ethical validity of sacrificing the present for the sake of the future, recognizing the complicity of this mode of historical thought in their violent subjugation. Gandhi’s nonviolence thus called on humans to be morally accountable in the present rather than engage in immoral acts for the sake of some future vindicating effect. If Victorian history is about noble ends justifying ignoble means, the Gandhian response was that there is no distinction between ends and means; the means are the end.

Today The Economist, a magazine devoted since 1843 to the liberal vision of progress, complains that the historical discipline has been displaced from its “central position in national life,” where it had served as a “ticket into the elite…as Alan Bennett documented.” It lost this status, according to the magazine, because of an excessive preoccupation with the “marginal rather than the powerful.” In fact, as current conversations about coming to terms with Britain’s past show, history has not lost its central position. But it is a different kind of history, one that does not ask us to sacrifice the present for future greatness but to redeem the past to create new history in the present. It is precisely this redemptive purpose to which today’s Churchill-boosters object. Andrew Roberts called the Harvard historian Caroline Elkins’s Pulitzer-prize winning account of Britain’s concentration camps in Kenya libelous—but it, coupled with the discovery of a trove of corroborating government documents, became the foundation of formal British government acknowledgment of the events and compensation to survivors. This was one of the early steps in the accelerating conversation about addressing the imperial past.

The Johnson government and its Brexit vision are a memorial in the opposite direction, glorifying that past—making memorialization and reparations of empire’s victims both more difficult and more urgent.

Those who understand that it is not great men with stiff upper lips that make history but ordinary people acting out of their own sense of justice should persist in demanding cultural and political acknowledgement of the reality of the imperial past. Regardless of whether such collective action is effective, it, too, is an end in itself. After the massive people’s march against Brexit in March 2019, Tim Adams helpfully explained that though the marchers’ time and effort would inevitably be judged fruitless, it mattered the way mass marches always do: “as a reminder . . .that democracy is not a settled state, but a shifting expression of collective will.” The means really are the end.

The government that worships Churchill for defeating the Nazis but nevertheless tolerates racist and xenophobic views of immigration among its supporters might reflect on that contradiction. Rather than feebly echoing Churchill and the expired notion that present suffering will yield future greatness, it is time to constructively address the questions about the past that haunt our present. In doing so, we might find new connection with both the dead and the living. Escape from great-man centered history, from history framed as conquest and progress, is its own atonement.