Blaming the Messenger: Trump, the KKK, and the War on Historians

David Welky is a Professor of History at the University of Central Arkansas. 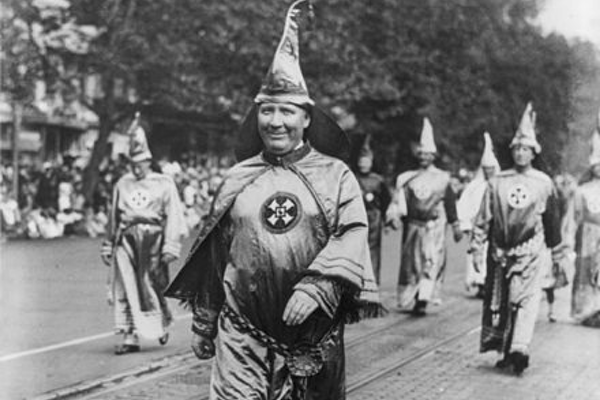 During the lead-up to the election, President Trump and other right-wing populists have attacked American historians who question traditional – some would say outdated – narratives of American history, meaning those that stress unthinking patriotism and unquestioning national pride. Hoping to energize his political base, Trump convened the 1776 Commission, a panel tasked with developing a “patriotic education” curriculum that will supplant alleged “left-wing indoctrination” of innocent schoolchildren. His initiative reflects a larger backlash against multiculturalism and historians who expose the darker corners of American history while urging their students to create their own historical narratives through open-minded inquiry. One of Congress’s most strident conservative voices, Senator Tom Cotton of Arkansas introduced a bill to strip federal funding from school districts that teach the 1619 Project, an ambitious attempt to reframe American history around issues of slavery, racism and Black contributions to national life. Rising to this bait, conservative outlets have renewed their longstanding assault on the radical historian Howard Zinn, who died ten years ago, as a symbol of everything wrong with historians who dare question traditional narratives.

The president and his ideological peers are likely unaware that their goals, motivations, and methods recall those used by patriotic groups and such populist, right-wing organizations as the Ku Klux Klan in the 1920s.

Peaking in around 1923, the American Legion, the Sons of the American Revolution, the Klan, and other groups sponsored a wave of bills designed to impose a simplistic, triumphalist vision of American history on students. Like today’s conservative culture warriors, they insisted that the “proper teaching” of American history could reverse the perceived decline of traditional values, blunt the appeal of left-wing radicalism, sever immigrants’ attachments to their former countries, and replace multiculturalism with good-old-fashioned Americanism.

This loosely coordinated campaign, like its 2020 counterpart, reflected broader concerns for the future of a country in flux. As is the case today, many 1920s-era Americans imagined that previous generations were more homogenous, more virtuous, and more patriotic than themselves. To their minds, divisions, struggles, and persistent inequalities were errant stitches, best ignored, on a broader tapestry of national greatness. In 1923, California’s state commissioner of secondary schools, A. C. Olney, in recommending appropriate American history textbooks, warned against assigning authors who treated “old and dead” controversies such as the Civil War “in such a way as to perpetuate animosities.” From this perspective, the purpose of studying the past was not to pursue broader truths or to appreciate the contributions of diverse groups, but rather to unify present-day Americans behind celebratory interpretations of historical events.

National unity struck seemed like a matter of national survival, as it does for many 2020 conservatives. World War One-era calls for 100% Americanism, backed by federal laws such as the Espionage and Sedition Acts, silenced dissent and inflated fears of un-American immigrants and heterodox opinions. The post-World War One dread of communist infiltration sparked a full blown Red Scare marked by harassment, vigilante violence, and deportations. Fears that multiculturalism would overwhelm traditional American values helped inspire the 1921 Emergency Immigration Act and 1924 National Origins Act, laws that restricted immigration from so-called undesirable ethnic groups.

Militant hyperpatriotism, Red baiting, nativist rhetoric, and anti-diversity campaigns fueled the right-wing backlash against American historians then as well as now. The Klan, in particular, hoped to exploit education reform (a term used here in a value-neutral way) to broaden its popular appeal while undermining perceived threats to white, Protestant dominance. The 1920s-era Klan was a prominent social organization that claimed a membership of four million, probably an exaggeration but one it could make with a straight face. Unlike its Reconstruction-era predecessor, it furthered its agenda through political pressure, economic boycotts, intimidation, and harassment rather than naked violence, although violence and threats of violence remained part of its toolkit. Its anti-Catholic, anti-immigrant, “pro-American” program resonated with white Protestants who feared losing social and economic status during a tumultuous time.

KKK Imperial Wizard Hiram Evans advocated the creation of a federal department of education that could oversee “the re-Americanization of our common Republic.” Local Klan chapters marched behind parade floats depicting little red schoolhouses, the symbol of sturdy, old-fashioned Americanism. Klansmen distributed American flags and Bibles to public schools, lobbied school boards to fire Catholic teachers, and introduced bills requiring public schools to hire public-school graduates as teachers, thereby undercutting Catholic parochial schools. With limited success, the Klan pushed its influence onto college campuses in an attempt to shape history curricula. Their most notable victory came in Oregon, which in 1922 passed the Klan-backed Compulsory Education Act. The law, aimed at destroying parochial schools that the Klan denounced as undemocratic, required all students to attend public schools (the U.S. Supreme Court later struck down the law).

A crucial element of the Klan’s education program, one it shared with other right-wing groups, was stifling American historians whose interpretations clashed with their own. For California’s A. C. Olney, that meant histories that treated “any part of the American history in a disloyal or unpatriotic manner” or minimized “the best patriotism of American tradition.” Olney’s use of “the” in “the American history” was no accident; many traditionalists used this defiantly singular construction to imply that there was only one correct version of their nation’s story.

Today’s culture warriors would recognize and even parrot perspectives from the 1920s, including that of Wisconsin state senator John Cashman, who declared in 1923 that “un-American professors can do more harm in ten months than a hundred ship loads of reds could do in ten years.” That same year, two years before Tennessee’s Butler Act banned the teaching of evolution, Cashman sponsored a bill to ban history textbooks that “cast aspersions upon the heroes of the American Revolution or the War of 1812.” A good American history class, he argued, “tells the truth from an American point of view,” thereby driving “anti-American propaganda” from the schools and enabling children to mature into patriotic adults. Cashman’s bill passed easily and was signed into law.

New York, Oregon, and other states considered copycat bills targeting “anti-American propaganda.” California legislators introduced a bill making it a fireable offense for history teachers to criticize the Constitution or the Founding Fathers. In Arkansas, a Klan-dominated state legislature passed a law requiring all college students to take a course in American history and government not as a path toward greater enlightenment, but rather as a means of engineering what they saw as the right kind of education: one that instilled blind patriotism.

President Trump and his allies would no doubt applaud these measures, some of which are still on the books. Like twenty-first-century traditionalists who want only to learn a (singular) truth about the past, early twentieth-century critics spread fundamental mistruths about the study of history. Rather than accept that a historian’s individual interpretation of documents and events are key to their craft, 1920s-era traditionalists cried for “strictly unbiased” texts without ever explaining what those would look like. While denouncing biased texts, they, much like President Trump’s 1776 Commission, pressured American historians to present positive interpretations of the past. “The young of today should be taught that there has been and is more virtue than vice, more strength than weakness, more noble aspirations than ignoble deeds, in the transcending story of American life,” the Marshfield (WI) News-Herald opined. “Our greatest men have had their faults,” seconded Judge Wallace McCamant of Oregon, national chairman of the Committee on Patriotic Education, “but why cast the spotlight upon the flaws while, at the same time, leaving the more important features in darkness?”

Decades later, the multiculturalist revolution of the 1960s rewrote American history by incorporating a wider range of voices into in increasingly fractured national narrative. In the ensuring years, Black people, women of all races, and ethnic minorities have assumed ever-more prominent positions in both textbooks and classrooms. Their stories, and the more complex and nuanced views of history they have inspired, banished Judge McCamant’s one-dimensional version to the historical dustbin.

Or so the historians argue. Beyond the realm of academia exists a yearning to restore that simpler story, along with its message of inevitable progress, (Protestant) white male dominance, and traditional American values.

Whether for ideological or political ends, President Trump and other conservative culture warriors are waging this same battle for restoration, using the same tools as the 1920s-era Klan: intimidation, bullying, and public shaming. Whereas this harassment once involved boycotts and cross burnings, it now exists on social media and the internet, where armies of outrage, inflamed by such sites as Infowars and such groups as Campus Reform, denounce history teachers whose heterodox interpretations clash with their own. Honest debate and intellectual freedom are not their aims. Instead, similar to the past century’s Klansmen and their allies, they seek to either coerce universities into firing supposed radicals or, barring that, to bludgeon them into silence. Should they succeed, their victory will strike a blow against diversity, tolerance, and multiculturalism – precisely the goals of a century earlier.

The fate of President Trump’s 1776 Commission hangs in the electoral balance. What is certain is that, even should the president lose his re-election bid, the right-wing populist campaign that he helped recharge, a movement with deep roots in our past, will keep attacking historians whose professional interpretations clash with their own understandings of American history.