The Devil and Mary Lease

Alan Singer is a historian and teacher educator at Hofstra University. Follow him on twitter at https://twitter.com/AlanJSinger1. 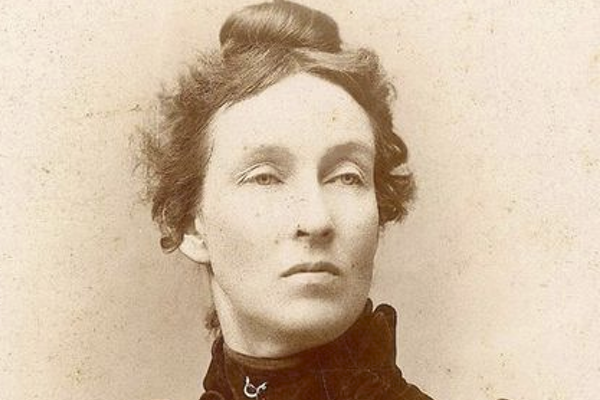 The Black Lives Matter movement precipitated a national discussion over who and what should be honored with statues, monuments and place names. Recently the New York City Parks Department announced ten “park spaces” would be named in “honor of the Black experience in New York City.” The newly named park spaces recognized national figures like Langston Hughes, James Baldwin, Elston Howard, and Ella Fitzgerald who all had New York ties and local community leaders.

There is a statue of Mary E. Lease in Wichita, Kansas, erected in 2001 by a Kansas women’s club she founded in 1886. As someone active in the push to take down statues and rename places, I have been thinking a lot about that statue and Lease’s role in history.

As a high school United States history teacher, I introduced students to Lease as a leader of the late 19th century Populist movement that introduced many democratic reforms into American politics, as a dramatic speaker who had the ability to mobilize a mass movement, and as an example of a powerful woman whose contributions to American history are often ignored.

Mary E. Lease was a late 19th century Populist leader who campaigned for the rights of farmers, workers and women. She was a leader of both the women’s suffrage and prohibition of alcohol movements and was active in the labor movement as a member of the Knights of Labor. As a Populist, Lease led a crusade against the power of corporate monopolies and banks that dominate the American and global economy. She is credited with advising Kansas farmers to “raise less corn and more hell.”

Lease is featured as a representative of Populism in The Americans (Houghton-Mifflin, 2005), one of the standard texts used in United States high schools. In the chapter on “Farmers and the Populist Movement” there is a photograph of Lease, a mini-biography, and a quote from one of her speeches (425). She is described as a “spellbinding” speaker (427).

Unfortunately, Lease was also an anti-Semite who used anti-Jewish tropes and direct anti-Semitic references to stir up her audience. In her standard stump speech, Lease warned,

In another speech, this one to the Women’s Christian Temperance Union, Lease claimed “the government, at the bid of Wall Street, repudiated its contracts with the people . . . in the interest of Shylock,” the stereotypical Jewish villain in Shakespeare’s The Merchant of Venice.

On August 11, 1896, the New York World reported on Lease’s “seductive oratory” at a Cooper Union “free silver mass-meeting” in Manhattan. Lease “attacked the entire social system” and “every reference to wealth and its owners received with wild delight.”

During her speech “Every mention of gold or wealth was greeted with shouts and jeers, and the names of Whitney and Cleveland, of Vanderbilt and Rothschild were hailed with hisses and cat-calls.” Whitney was William C. Whitney, financier, coal baron and political insider. Cleveland was President Grover Cleveland. Vanderbilt was Cornelius Vanderbilt II, who inherited his family’s control of the New York Central Railroad. Rothschild was the European Rothschild banking house, reportedly the wealthiest in world history. In the World article, Lease did not identify the Rothschilds as Jews. However, the New York Times also reported on Lease’s speech at the Populist rally. The Times article quotes Lease “We are paying tribute to the Rothschilds of England, who are but the agents of the Jews.” The speech was ”received with close attention, and was heartily applauded.”

In her book, The Problem of Civilization (1895), Lease wrote

“Our commercial system would be sadly disturbed if our government granted a monopoly of gallons, bushels and yards to a company of Jews. Then the man who conducts a wholesale or retail business would be compelled to hire a bushel, gallon or a yardstick from the Hebrew before waiting upon his impatient customers. Hunger, haste and pressing necessity alike would have to wait the pleasure and interest of the Jew.”

“why should money be conceded the quality of intrinsic value? Because tradition and superstition have invested it with an artificial nobility, similar to that of the Divine right of kings; because gold and silver are commodities which can be manipulated in their value by speculators and pirates of the financial world, and because, in the hands of the Rothschilds and their imitators the measure of values may be expanded or contracted to suit their interest.”

Later, Lease described the Rothschilds as the “hook-nose harpies of the House of Heber” and she accused President Cleveland, “Grover the First” of being “the agent of Jewish bankers.”

I am a descendent of the people Mary E. Lease called “hook-nose harpies of the House of Heber.” However my Eastern European ancestors were impoverished village peddlers and factory workers, not global bankers, as were the ancestors of most American Jews. There is no question that Mary E. Lease believed in and used anti-Semitic tropes. As the Black Lives Matter movement challenges statues and place names celebrating the Confederacy and racists, what do we do about Mary E. Lease?

In an October 1962 article in the American Historical Review (68/1, pg. 76-80), Norman Pollack of Michigan State University challenged “The Myth of Populist Anti-Semitism.” Based on his research in archive collections of the papers of Henry Lloyd, William Jennings Bryan, and Ignatius Donnelly, Pollack argued incidence of Populist anti-Semitism were “infinitesimal.”  He dismissed accusations leveled at Lloyd and Bryan and describes Donnelly’s anti-Semitism as “ambivalent and complex.” According to Pollack, Populist newspapers were principally concerned with the Rothschilds as international bankers, not as Jews. Mary E. Lease’s use of anti-Semitic references in her speeches raise serious doubts about Pollack’s conclusions.

Unfortunately, anti-Semitism has a powerful and disturbing history in the United States and, through the speeches of Mary E. Lease, a connection with late 19th century Populism. Three decades after the peak of the Populist movement, quotas were imposed that severely limited Jewish immigration to the United States. Prior to World War II, President Franklin D. Roosevelt, fearing political repercussions if he were seen as aiding European Jewry, refused to allow Jewish refugees fleeing Nazi Germany to enter the United States and during the war would not order U.S. forces to bomb rail lines transporting millions of Jews to their deaths in Nazi concentration camps. In 2017, at a Unite the Right rally in Charlottesville, Virginia, marchers who were later defended by President Trump, chanted anti-Semitic slogans.

"The Devil and Daniel Webster" is a short story by Stephen Vincent Benét first published in the Saturday Evening Post in October 1936. It became an Academy Award winning movie in 1941.

Daniel Webster, Senator from New Hampshire, is the lawyer for a farmer accused of selling his soul to the Devil. The Devil acts as prosecutor and produces a jury of assorted villains that he expects to convict the farmer and honor the contract. But Webster is very persuasive and the Devil is incredulous when the farmer is acquitted.

Mary E. Lease, populist and feminist, sold her soul to an anti-Semitic Devil. If I were on her jury, I would vote to let her statue remain but insist that a plaque, and all textbook references, include the disturbing fact of her anti-Semitism.