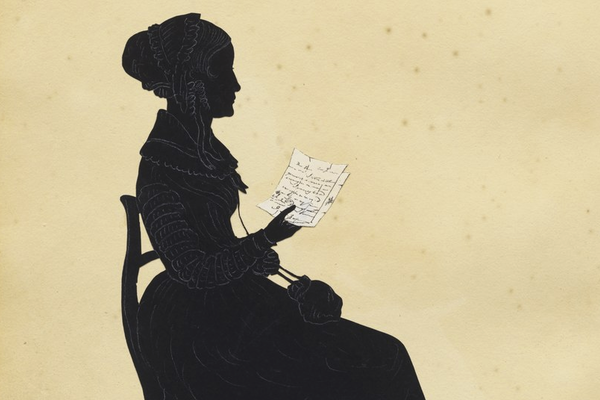 Silhouette of Sarah Josepha Hale by Auguste Edouarte, 1842
When you celebrate Thanksgiving, you can thank a writer from a small town in New Hampshire who never gave up on an idea.

Sarah Josepha Hale was born in Newport, New Hampshire in 1788. While home schooled, Sarah developed her writing skills. She would become a poet, and one of the first American women novelists writing about New England and the horror of slavery within the nation. Sarah also became a magazine editor and supported her five children after her husband, David Hale, passed away.
One of Sarah’s great causes was a National Thanksgiving holiday, and she wrote about this frequently in her stories. In her novel Northwood she writes "when Thanksgiving will be celebrated together across the nation it will be a grand spectacle of moral power and human happiness such as the world has never witnessed.”
Sarah launched a fifteen year letter writing campaign to elected officials, including the president, to make a national Thanksgiving Day a reality. Persistence was her virtue, which led to the Thanksgiving we now enjoy.

In 1863 Sarah wrote to Abraham Lincoln "You may have observed that, for some years past, there has been an increasing interest felt in our land to have the Thanksgiving held on the same day, in all the States; it now needs National recognition and authoritive fixation, only, to become permanently, an American custom and institution."

She urged  Lincoln to make it happen "by the noble example and action of the President of the United States, the permanency and unity of our Great American Festival of Thanksgiving would be forever secured."

With Sarah’s encouragement Lincoln proclaimed the National Thanksgiving holiday, a time of unity and healing in a nation that was still divided in the Civil War.

Lincoln wrote on October 3, 1863 "I do therefore invite my fellow citizens in every part of the United States, and also those who are at sea and those who are sojourning in foreign lands, to set apart and observe the last Thursday of November next, as a day of Thanksgiving and Praise to our beneficent Father who dwelleth in the Heavens. …..and fervently implore the interposition of the Almighty Hand to heal the wounds of the nation and to restore it as soon as may be consistent with the Divine purposes to the full enjoyment of peace, harmony, tranquility and Union."

That is the origin of the Thanksgiving holiday you see today. This year, as our nation emerges from a divisive election and battles a pandemic, Thanksgiving can again play a role in healing. One way is to ensure everyone has food on their table for the holiday season which Thanksgiving kicks off.

The Coronavirus pandemic, and all the closings it has caused, has led to millions more Americans seeking the help of foodbanks. You could donate to your local foodbank, which is seeing record demand. You can also take a page out of Sarah Josepha Hale's book and write to your elected officials urging them to increase food assistance to the poor.

Overseas the hunger crisis has become so severe that on Thanksgiving Day four nations (Yemen, South Sudan, Nigeria, and Burkina Faso) are on the brink of famine. The Democratic Republic of the Congo, Afghanistan and many other countries are also experiencing hunger emergencies and need our help.

Letters to Congress can urge them to increase global food aid to stop the famine threat. The UN World Food Program director, David Beasley, warned in September, "the 270 million people marching toward the brink of starvation need our help today more than ever.”

With letter writing tenacity, you could make a difference in getting Congress to fund an increase in food assistance at home and abroad, when it’s needed the most. Bread for the World, World Food Program USA, Catholic Relief Services, Save the Children and other charities encourage letter writing to fight hunger. Your actions could literally save millions of lives overseas by funding infant nutrition programs and also the McGovern-Dole initiative that feeds hungry school children.

What better way to celebrate Thanksgiving than to be united in a common purpose and to demonstrate the "moral power" that Sarah Josepha Hale wrote about. No one should go hungry on this special holiday and every day thereafter.