Meredith F. Small is a professor of anthropology at Cornell University and the author of Our Babies, Ourselves; What's Love Got to Do with It?; and Female Choices. She has written for Natural History Magazine, Discover, Scientific American, and is a commentator for National Public Radio's All Things Considered. Her latest book is Inventing the World: Venice and the Transformation of Western Civilization. 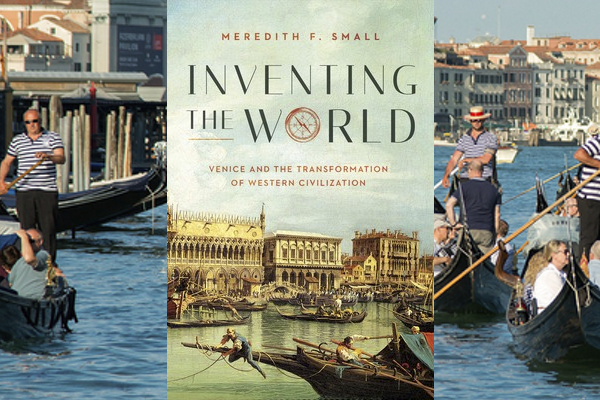 When Venetians invented quarantine in 1348, the government proclamation was based on the fact that this cosmopolitan city could put two and two together. The Venetian Republic had based its thriving economy on trade by sea and it became obvious that when foreign ships arrived, an outbreak of plague sometimes followed. They began with keeping ships at bay, making them sit offshore in the Venetian lagoon for 30 days. That time frame soon increased to 40 days, from which we get the word quarantine (quaranta means 40 days in Italian and Veneziano, the language of Venice). The government then created an elaborate protocol that included offloading people and their goods (which were fumigated with smoke and herbs) onto an isolated island with a newly constructed housing complex. Venetian citizens exposed to plague, and their extended families, were sent there too. If plague was detected, the victim was transported to another island full of infected people. If after 40 days there was no sign of disease, people were free to go. Although sick people had been isolated before (think lepers), Venice was the first government to develop a comprehensive plan to protect the public from infectious disease.

This story is a part of the history of public health, and it has been reported in the popular press over the past year as, once again, a new “plague” threatens communities. But less well-known are the other health practices and ideas that Venetians invented that are also part of modern health care.

Back then, no one knew how diseases were actually transmitted. Arab intellectual and physician Ibn al-Kathib mentioned the possibility of “contagion” in 1362 after seeing what plague had done to port cities. But the first real description appeared in 1546 when University of Padua (then part of the Venetian Republic) professor Girolamo Fracastoro published De Contagione et Contagiosis Morbis. Fracastoro suggested that some diseases were passed along by tiny particles he called fomites, a word that means “tinder” in Latin. Fracastoro proposed that fomites (which we now call germs) were responsible for a disease turning into a raging fire of infection. He also made the enlightening suggestions that these fomites could move from person to person in bodily fluids, they could survive for a very long time, and while the fomites themselves were not infected, they were the causal factor of an infection. Fracastoro came to this idea during his work on syphilis, which was rampant at the time. He also conducted the first known clinical trials using doses of mercury as a cure for syphilis.

Physicians at Pauda in the 1500s also pushed medical students to visit their patients and actually touch them, rather than observing from afar, and to keep notes (today’s charts). Every day for thirty years physician Santorio Santorio weighed himself (after first inventing the body scale) and what he ate, drank, urinated, and defecated, thus compiling the most thorough record of human metabolism and the first example of “evidence-based medicine.” He also added a numerical scale to Galileo’s thermoscope, turning it into a thermometer, and built the pulsilogium, a device that used a pendulum to match and measure heart beats, the first blood pressure device.

Innovations in protection and care were not just confined to smart individuals or emergency medical acts by the government. In 1485, Venice established the first Ministry of Health (Magistrato alla Sanità) in the world and it operated for over 400 years. Besides managing quarantine, the Magistrato also oversaw physicians and barbers who conducted medical procedures; made sure the sewers worked, garbage was removed, dead bodies picked up, those suffering mental health issues received care and treatment (sometime sequestering them on another island); and that the public drinking water was clean. They also issued official documents of health carried by citizens, just as today we sometimes have to present proof of a COVID-19 test (or, hopefully soon, a vaccination).  By the 1700s, Venice was known as the best health ministry in Europe.

What makes this list of medical innovations so interesting is that they happened in a very particular republic. What was it about Venice that fostered that kind of creativity?

The topography of Venice is key to understanding its fertile intellectual atmosphere. The main part of Venice is actually 118 tiny islets connected by canals, and now bridges, set in a vast lagoon. As the populace grew from its beginnings in the 400s, there was nowhere to spread and so Venice became a densely populated place. An accurate map of the city today still shows a labyrinthine maze of streets so complex that only a Venetian really knows their way around. Back then, as now, everyone walks or goes by boat, and that means people run into each other all day long. Even rich merchant traders in Medieval times, men dependent on workers, were never sequestered in their palazzi. The density also meant like-minded entrepreneurs and inventors could find colleagues right around the corner, or in neighborhood confraternities, which clearly fostered innovation. The Republic of Venice’s constant rebuff of Papal intervention also protected freedom of speech and thought; if you wanted move ahead with new ideas, Venice was the place.

That freedom was underscored by the political leadership. Instead of a single ruler, the republic was governed by a body politic initially formed by leaders of various islands across the lagoon, and their governing style used constantly rotating committees. That political construction stuck with Venice as it grew into an independent republic. Even when the self-named nobles voted to exclude those not designed as aristocrats from government in 1297, a move that several historians feel was the initial death knell for the end of Venice 500 years later, governmental decisions were still made by committees with rotating members. More important, the constant interpersonal interaction between legislators and the populace fostered a governmental obligation to the citizenry because they were so essential to trade. And so, the Venetian Republic enclosed the city in a mantel of protective oversight such as maintaining the complex hydraulics necessary to manage the lagoon, installing streetlights, and establishing the first child labor laws.

Venice’s small footprint, dense population, unusual governmental structure, and its devotion to trade was a unique combination that fostered innovation, entrepreneurship, and creativity. And it brought us health measures that are so crucially important today.