Reflections on Fredrik Logevall's "JFK: Coming of Age in the American Century, 1917-1956" 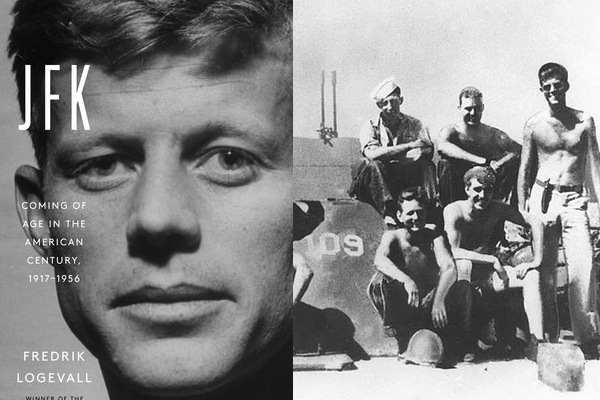 Author's note: Logevall, in his Acknowledgments, cites my “steady guidance throughout” and grasp of JFK as “about as deep as anyone’s.” Most journals would likely exclude me from reviewing this book. This essay, however, is not a review as usually defined; rather, it reflects my personal thoughts grounded in years of extensive experience with the archival evidence in the John F. Kennedy Library.

In January 1977, I joined the staff of the JFK Library [JFKL] as a historian. My first assignment was to assess the more than one thousand interviews in the JFK Oral History Project to identify any substantive gaps. However, an extraordinary phenomenon quickly caught my attention: a striking number of interviewees, recalling their first encounters with young Congressman Kennedy in the late 1940s, claimed that they had immediately sensed that he would become President of the United States.

The photos and news film from that period, in sharp contrast, reveal a gaunt and sickly-looking young man, careless and sloppy about his clothes and reportedly oblivious to criticism of his poor attendance on the House floor. These wildly implausible, counter-intuitive recollections are almost certainly rooted in the culture shock of his assassination—which suggests an intriguing question: how significant is personal experience of the brief JFK years for scholars working to unravel the so-called “Kennedy mystique?” To live through November 22, 1963 is to “continue to hope that … somehow, the president will make it through Dealey Plaza unscathed. But Kennedy will still ‘die anew before our eyes every time.’” [1]

Historians of that generation internalized this trauma as well and some reviews of Logevall’s book have evoked the “poignant reminder of what we were—far too soon—to lose” (John Lewis Gaddis) and asked “who among us would not welcome some of that Kennedy-esque enchantment now?” (David M. Kennedy). But the first volume of this biography takes the young Kennedy only through 1956—well before the initials ‘JFK’ conjured up poignancy or enchantment. Logevall, born in Sweden in 1963, is notably the first academic JFK biographer with no personal memory of President Kennedy or the genesis of his lasting hold on American imagination. The torch has indeed been passed to a new generation.

Logevall has also been exceptionally fortunate to have access to many documents and recordings declassified by the JFKL over the last few decades; he describes the book as the first “full life and times” study of this “larger-than-life” figure that “makes abundant use of the massive archival record now available. … Of course, any serious attempt to re-create Kennedy’s world as he experienced it requires suspending as much as possible the knowledge of how it all turned out. … Only by doing so can one hope to play it straight, to look the man right in the eye, not up in adulation or down in disdain.”

It is essential that readers understand, as students like to say, “where I am coming from.” My top-secret security clearance at JFKL allowed me to read and listen to a wide range of classified material. I was the first non-member of the ExComm and the first historian to hear and evaluate all the then-classified Cuban missile crisis tape recordings as well as scores of hours of private discussions and meetings on everything from the burgeoning civil rights movement, to the construction of the Berlin Wall, and the federal budget.

Logevall’s overriding theme is both historically and biographically compelling: JFK’s “coming of age” intersected directly with the advent of the American century—that is, for better or for worse, with the emergence of American postwar world leadership. Senator Kennedy, in early 1960, bluntly admitted to journalist Hugh Sidey that his family’s wealth had insulated him from the ravages of the Great Depression: “I really did not learn about the depression until I read about it at Harvard. My experience was the war. I can tell you about that.” “If I had to single out one element in Kennedy’s life that more than anything influenced his later leadership” Sidey concluded, “it would be a horror of war, a total revulsion over the terrible toll that modern war had taken on individuals, nations and societies, and the even worse prospects in the nuclear age.”[2]

Professor Logevall is plainly captivated by Kennedy’s insightful, introspective and often acerbic wartime letters—which open a window into the evolving perspective of this twenty-six-year-old Navy lieutenant as he strives to survive the carnage around him but never stops thinking about what it all means. “When I read that we will fight the Japs for years if necessary,” he wrote his parents from the South Pacific, “and will sacrifice hundreds of thousands if we must—I always like to check from where [the writer] is talking—it’s seldom out here.” “Generals are seldom wrong and Admirals never,” he sounded off to his lover Inga Arvad; “They have brought back a lot of old captains and Commanders from retirement … and they give the impression of their brains being in their tails.”[3]

Lieutenant Kennedy elaborated in “a hell of a letter” to Arvad:

"It’s very easy to talk about the war and beating the Japs if it takes years and a million men, but anyone who talks like that should consider well his words. We get so used to talking about billions of dollars and millions of soldiers, that thousands of casualties sound like drops in the bucket. But if those thousands want to live as much  as [my PT boat crew], the people deciding the whys and wherefores had better make mighty sure that all this effort is headed for some definite goal, and that when we reach that goal we may say it was worth it, for if it isn’t, the whole thing will turn to ashes, and we will face great trouble in the years to come after the war." [4]

“The whole story was fucked up,” he later told journalist Robert Donovan, “You know the military always screws up everything.” In 1947, the freshman congressman warned that a war utilizing atomic bombs “would truly mean the end of the world.”[5] World War II was the crucible in which what Logevall calls Jack Kennedy’s “unvarnished realism” matured into an enduring world view.

Fifteen years later President Kennedy was “deciding the whys and wherefores” after the discovery of Soviet nuclear missiles in Cuba—and the White House tapes reveal a striking intensification of his earlier skepticism about war. In a tense meeting with the Joint Chiefs, JFK was barely able to contain his impatience after they condemned his decision to respond with a naval quarantine and demanded bombing the missile sites and invading Cuba “right now.” There is an almost plaintive quality in his voice as he tries to explain that nuclear war would mean “eighty to one hundred million casualties” in the United States alone. “You’re talking about the destruction of a country. … The logical argument is that we really don’t have to invade Cuba. … that’s just one of the difficulties that we live with in life, like you live with the Soviet Union and China. … I mean, hell, they can kill [millions with the missiles already in the USSR], especially if they concentrate on the cities, and they’ve pretty much got us there anyway.” One of the Chiefs raised the possible use of tactical nuclear weapons in Cuba. [Tactical or battlefield nuclear weapons had a maximum range of 30 miles and 1/7 the explosive power of the bomb dropped on Hiroshima.]  But the president countered: “We can’t use them. … The decision to use any kind of a nuclear weapon, even the tactical ones, presents such a risk of it getting out of control so quickly.”[6]

The final crunch came on October 27 when Nikita Khrushchev announced on Moscow Radio that he would remove the missiles from Cuba if the US pulled the Jupiter missiles out of Turkey. JFK’s advisers, all but unanimously, urged rejection of this new demand—describing it as “absolutely anathema.” But the president countered that the US would be “in an unsupportable position” because to any “rational man, it will look like a very fair trade. … [and] a reasonable position. … Let’s not kid ourselves.” Almost certainly recalling his own wartime experience, he warned: “And we all know how quickly everybody’s courage goes when the blood starts to flow. … Today it sounds great to reject it, but it’s not going to after we [take military action and Russia retaliates]. … I think we’re better off to get those missiles out of Turkey and out of Cuba because I think the [military] way of getting them out … is gonna be very, very difficult and very bloody.” Kennedy reiterated, “Let’s not kid ourselves”--three times! [7]

President Kennedy was, in essence, reframing Lieutenant Kennedy’s 1943 views in the context of the Cold War between the two nuclear superpowers: if we accept the missile swap, we achieve a “definite goal” which “was worth it”—peacefully resolving the crisis; if we reject it, “the whole thing will turn to ashes, and we will face great trouble….” Lieutenant Kennedy’s “unvarnished realism” was clearly hiding in plain sight during those climactic Thirteen Days in October 1962.

The recorded telephone dictabelts are the most intimate and intriguing aural evidence in the JFKL; they capture the real, unguarded, private JFK (for example, congratulating the governor of California on his 1962 reelection victory over “crazy” Richard Nixon or comparing the badly-defeated American Olympic hockey team to “a bunch of girls).”[8] One particularly revealing call confirms that the empirical and dispassionate frame of mind Logevall detected in Lieutenant Kennedy was alive and well a generation later in the White House. During the 1963 Senate hearings on the pending Nuclear Test Ban Treaty with the USSR, the president was informed that expert testimony against the treaty by a prominent nuclear physicist might have cost the Administration some votes for ratification; Kennedy replied with a characteristic mix of objective, pragmatic thinking: “There’s no doubt that any man with complete conviction, particularly who’s an expert, is bound to shake anybody who’s got an open mind. That’s the advantage of having a closed mind.”[9]

Professor Logevall’s research is prodigious and his writing both elegant and persuasive; above all, however, his objectivity will serve as a model for historians seeking to achieve the still elusive goal of coming to grips with John F. Kennedy—"without tears.” The only drawback for scholars and general readers will be the wait for volume 2!

[8] For readers interested in sampling these calls: select “Telephone Recordings: Dictabelts” at JFKlibrary.org/search.