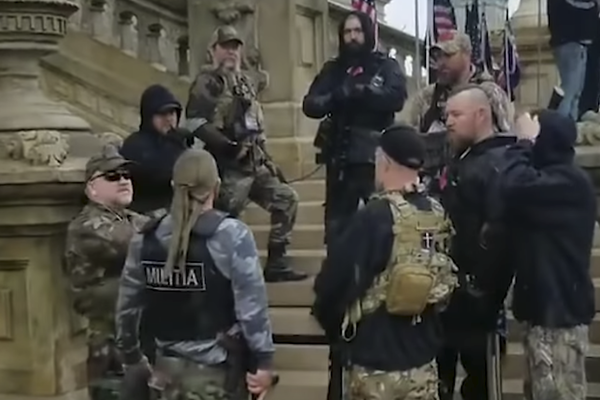 So, come January 20th, what should the newly elected president of the U.S. do on his first day in office? Most of us have our wish list already made out, freighted with emphasis on executive orders to reverse some of the more damaging decrees handed down by Donald J. Trump during his four long years in the White House. There are reasons to take a bracing cup of coffee with this enchanting possibility. Many would seem to delight in the arrival of a benevolent autocrat to execute these long lists, although one gift of Trump and his following in Congress surely includes a golden opportunity to showcase the potential of a democratic leadership.

Damaging as the Trump presidency has been to so many progressive causes, however, a newly inaugurated President Biden is likely to think first about those four major areas of national crisis identified during the recent campaign. The COVID-19 pandemic spiraling out of control, the state of the economy—with millions of Americans facing unemployment and dire need of relief, the growing menace of climate change which threatens life as we know it on a planetary scale, and the impact of lawless racism on our politics, including especially the deterioration of the discourse that pervades all government. It seems that Biden has correctly identified the problems that affect most of us, but what if anything, can or should he do on day one through use of the executive order?

The question is enlivened by the not-so-subtle reality of the political struggle surrounding the conduct of his immediate predecessor. As president, Trump abused the powers of office so flagrantly and with such casual disregard for the public character of our institutions that we are almost inured in the current atmosphere of partisan extremism and embittered accusation. The degeneration of American conservativism due to Trump’s corrupting influence has been a major factor, threatening a national revival of politics in the paranoid style, with a whole new rhetoric of conspiracy, violent confrontation and bigotry to underscore the trend toward demagoguery and absolutism.

Biden can begin to defuse the explosive charge that seems wired into the discourse of our current politics, posing so grave a threat to the national existence, by attending immediately to this problem before all else. Avoiding the excessive use of presidential authority by refraining from the abuse of the executive order will send a healthy message—it will affirm the civil nature of the political process and demonstrate that as president, he does not share the megalomania that has driven Trump to all manner of excess.

But where the executive order can be used constructively and in a manner consistent with the separation of powers and respectful of the role of Congress as the legal fountain of all legislative reform, he should certainly do so. The restoration of civil discourse is crucial to the successful operation of government on every level and is therefore a vital precursor to anything else that Biden will attempt. To that end, Biden can act boldly and to great effect by issuing an immediate emergency executive order banning the public display of a firearm at any public demonstration or assembly anywhere in the U.S. or any of its territories, upon penalty of temporary detention, a monetary fine, and with forfeiture of the weapon, enforceable by federal law enforcement in cooperation with local officials and police.

Certainly such a measure would mark a clear departure from those that stem from existing administrative law or legislative enactments. I know I must be dreaming, but along with the aroma of coffee I find it agreeable. Such an order would have an immediate calming effect on our national life by removing a significant source of danger to the public safety, sending a clear signal to partisan zealots that they cannot inhibit demonstrations by law abiding citizens, or make insidious threats into a normal part of political culture.

For its constitutional basis, Biden could cite the first amendment, which guarantees to every American along with religious freedom and freedom of the press, the right to peaceable assembly for the redress of grievances. The president could assert that when persons are permitted to assemble with firearms on public display, brandishing the weapon or issuing threats, it is an abuse of the second amendment and cannot be tolerated as a legitimate expression of its force. Respecting the right to bear arms does not include permitting groups of armed men to assemble while menacing the public safety. The right of assembly which is so vital to our democracy cannot be guaranteed where some are permitted to assault the very foundation of public order and the rule of law. Gun rights advocates should be the first to applaud such a measure, since public demonstrations in support of the second amendment only become infamous where armed cadres of men in camouflage or other military attire excite fear and provoke outrage, adding a whiff of gunpowder to what already appears in the guise of the lawlessness vigilante.

Biden, one hopes, will be likely to understand and should make clear to the public that the real purpose of such an action, to which Congress might ultimately contribute through supplemental federal legislation, is first and above all to restore civil discourse and the humane treatment of persons at every public gathering in the country. But such a measure will only be a first step toward restoring civil discourse, and should therefore include an important second corollary that will point squarely toward one of those four areas of our current national crisis—the persistent phenomenon of racism and the criminal abuse of police powers in cities and localities.

Biden can take a giant stride in this direction by establishing under the Department of Justice a national human relations commission, diverse by race and by gender, empowered to hold public hearings, to investigate criminal abuses of police power, to make referrals to federal courts and U.S. Marshalls within appropriate jurisdictions, and to make meaningful recommendations to state and local officials for the enhancement of civil discourse to discourage racism. The national HRC can be empowered to visit any city in the U.S. to conduct hearings, and should work with federal and local law enforcement to promote the responsible public character of law enforcement and the system of justice. But such a commission should not become an inquisition, having a mandate to punish law enforcement, but rather to assist in its mission, while promoting an environment appropriate to progressive government and healthy communities.

You may say that it is wishful thinking, that such an innovation is too much at odds with the climate of opinion, or that it would infuriate the gun rights advocates. You may insist that the Supreme Court will strike it down, that it would reach beyond federal jurisdiction and infringe upon the rights of states or local officials. But all of this has been said before, and the long history of struggle in the U.S. against vigilante groups offers numerous precedents.

Let’s think what it could mean for the nation’s chief executive to act in a manner so expansive as to demonstrate that the preservation of liberty and the majesty of law rely not on the threat of force, but reside within the exercise of responsible citizenship. Yes, despite what may be the lingering influence of Trump and his supporters in Congress, we can anticipate the opportunities that await Biden, that a new president can so dramatically alter the tone of our national dialogue. Having always believed in justice, the political process, and the peaceable way of resolving conflicts, it seems to me at the moment like the saner way to be a dreamer.