Kenneth Ladenburg is an instructor of English at Arizona State University. 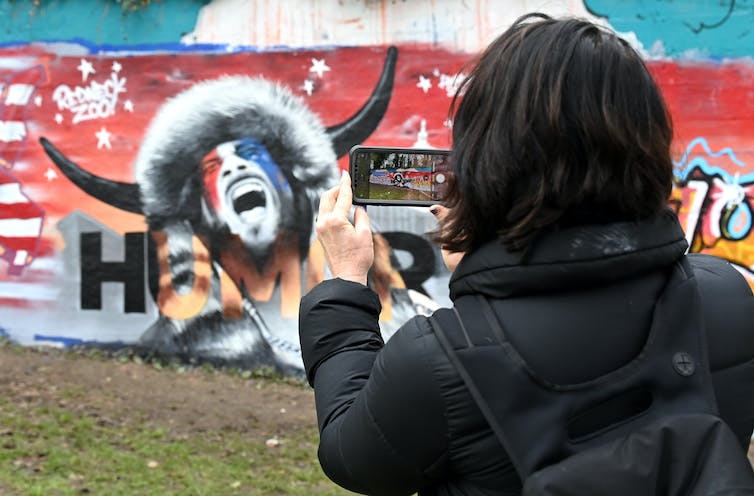 Fringe groups have long understood that capturing the public’s attention is the best way to spread their views. Karwai Tang/WireImage via Getty Images

After the riots at the Capitol, images of Jacob Chansley, who’s been dubbed the “QAnon Shaman,” were splashed across news outlets.

Chansley’s outlandish costume – consisting of American flag-themed face paint, a hat made of bison horns and coyote skins, a shirtless, tattooed torso and brown pants – was met with fascination and ridicule.

Given the outrageous nature of his garb, it might be easy to dismiss Chansley and the others wearing costumes or uniforms at the Capitol as silly or unhinged outliers.

However, after spending the last decade studying the rhetoric of organized racist groups in the United States, I know how outfits that look harmless and eccentric can actually have an insidious effect. In fact, costumes and uniforms have played a central role in the appeal of extremist groups throughout the history of the country.

The triumph of the spectacle

For many extremist groups, a primary goal is to spread their group’s ideology to the mainstream public. In order to accomplish this, groups need to gain as much widespread recognition as they can.

Costumes and uniforms are a form of spectacle that attract attention.

While most people recognize the infamous hood and white robes of the 1920s Klan, early Klan costumes were homemade, individualized and much more bizarre.

In the Reconstruction-era Ku Klux Klan, “imagination was encouraged” in the creation of costumes by members, who competed to create the most “outrageous outfit.”

Historian Elaine Parsons notes that early Klan costumes were composed of animal skins, horns, conical hats and gowns featuring a range of colors and patterns. Modeled after garb from carnivals and Mardi Gras traditions, the spectacle and performance of early Klan costumes helped to spur the swift growth of the group, which an 1884 history of the Klan described as “a wave of excitement, spreading by contagions.” 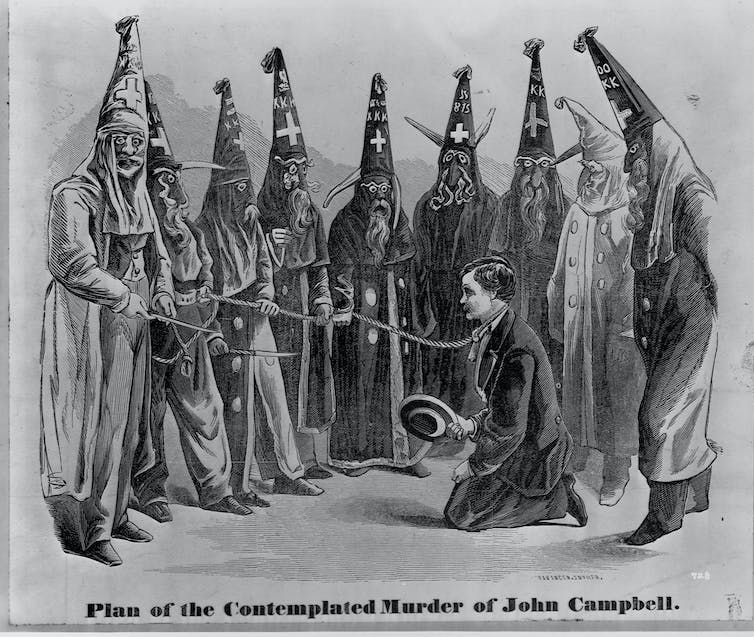 Early Ku Klux Klan outfits had a carnival-like quality to them. Library of Congress

And it is no coincidence that the revival of the Klan in the 1920s was in part popularized by the costumed Klansmen portrayed in the blockbuster film “Birth of a Nation.”

Like the early Ku Klux Klan, the viral spread of the QAnon conspiracy theory has been driven through spectacle. Chansley admitted as much. He has commented that his costume gets people’s attention, which then gives him the opportunity to spread the tenets of the conspiracy theory: that the world’s governments and banks are run by secret rings of Satan-worshiping pedophiles that manage child sex-trafficking organizations.

Other members of the movement are keenly aware of how their clothing can work to influence others.

Doug Jensen, the man seen in a viral video at the head of a mob chasing a police officer through the Capitol building, said in an interview that he purposefully positioned himself leading the charge wearing a “Q” shirt so that “Q” could “get the credit.” 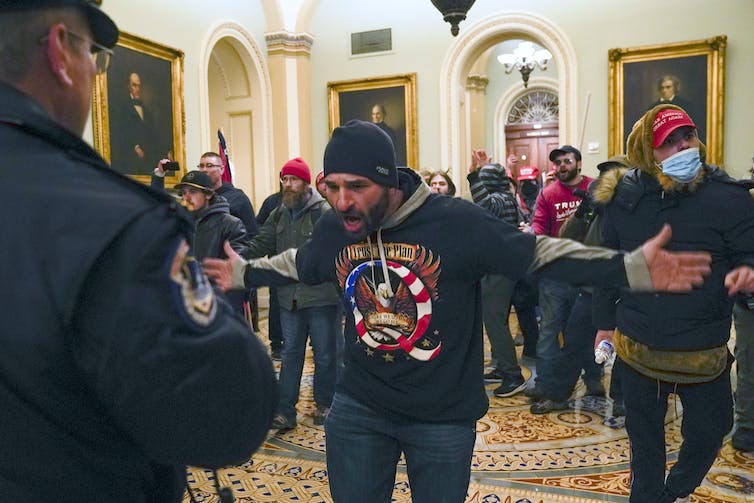 While Klan costumes became more homogeneous in the early 20th century, the white hood and robes did more than conceal the wearer’s identity. They also created a sense of “magnetism and prestige” through group secrecy. One ritual of membership involved other members lifting their masks after new recruits joined.

In the era of the internet, costumes and uniforms help groups construct community in a different way.

Most organized extremist groups in the United States primarily communicate in anonymous online spaces, and members are often separated geographically.

For these reasons, costumes, uniforms and symbols on clothing can act as physical indicators of group unity. This can work to bring divergent groups together – such as via a MAGA hat – or to denote a belief in a specific ideology, like patches with the QAnon motto “WWG1WGA,” an abbreviation for “Where We Go One, We Go All.”

To be sure, there are ways in which costumes and uniforms do more than simply operate as identifiers.

Hitler’s Nazi party believed that mass gatherings gave attendees a “sense of being protectively surrounded by a movement,” with the uniformed guard creating “a tendency to place the center of authority in the Nazi party.” In other words, because people often associate uniforms with legitimacy or power, the use of uniforms can help extremist groups persuade people that they should be trusted.

With its costumes, the Reconstruction-era Klan liked to perpetuate the legend that its members were the ghosts of Confederate soldiers. However, the Klan of the 1920s drew heavily upon religion in framing its mission as a holy cause.

One of the most violent Mississippi chapters of the Ku Klux Klan believed their members were chosen by God to conduct a holy war against the civil rights movement. Psychologist Wyn Craig Wade has noted how the “act of donning the costume was often recounted as ‘a holy experience’” by members of the Ku Klux Klan.

It should be no surprise, then, that today’s racist and extremist groups have also used this tactic. In describing the meaning of his costume, Chansley notes QAnon is engaged in a “war of a spiritual nature” and that his costume represents his status as a “light occultic force of the side of God” necessary to defeat an unseen, omnipotent force of evil. Some contemporary neo-Nazi and racist groups incorporate Norse symbolism and mythology, while others, following the Klan, use Christianity to frame their racist ideology as righteous or divine.

Although costumes cannot tell us the entire story of a group or movement, they can provide a window into understanding how the groups and movements form and how their ideologies are spread.

While they never need to be entertained, neither should they be ignored.