Can Biden Fulfill JFK's Incomplete Promise of a Peace Presidency?

Martin Halpern is Professor of History Emeritus, Henderson State University and the author of UAW Politics in the Cold War Era and Unions, Radicals and Democratic Presidents: Seeking Social Change in the Twentieth Century. He can be reached at halpern@hsu.edu. 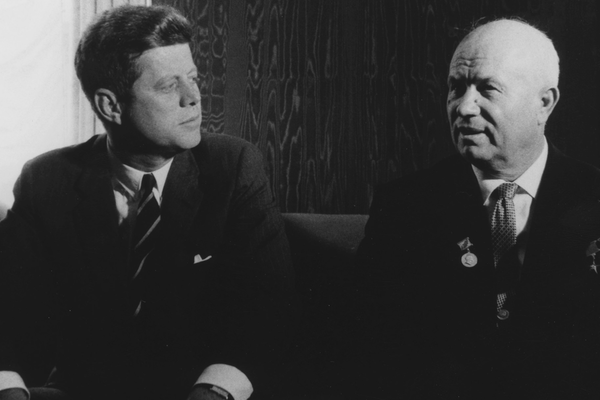 President Joe Biden and his advisers appear to have studied the lessons of Franklin Roosevelt’s presidency. Several executive orders have undone some of the damage wrought by President Donald Trump. The passage of the American Rescue Plan Act of 2021 provides aid to poor and working people and investment in the county’s infrastructure. In addition, Biden has spoken out in support of a union vote by Amazon workers in Bessemer, Alabama.

It would be wise for Biden and his advisers to study the lessons of the Kennedy and Johnson administration, second to the Roosevelt Administration in achieving domestic reforms. Like Biden, John Kennedy was supported by unions and articulated pro-union views. One year into his presidency, Kennedy signed Executive Order 10988 establishing collective bargaining for federal employees.

Kennedy’s more dramatic shift to progressive positions came in June 1963 with a speech to the nation advocating civil rights and a speech at American University advocating peaceful coexistence with the Soviet Union. The shifts in policy these speeches represented led to the passage of the Civil Rights Act of 1964 and the August 1963 Test Ban Treaty ratified by the U.S., the Soviet Union, and the United Kingdom.

Peace advocates found plenty to criticize in the foreign policies of the Kennedy and Johnson administrations. Prior to 1963, Kennedy’s relationship with Cuba and its ally the Soviet Union was confrontational, leading to the 1962 Cuban missile crisis. The escalation of the U.S. war in Vietnam by the Kennedy and Johnson Administrations and Johnson’s invasion of the Dominican Republic are among the ways that the shift to a more peaceful foreign policy fell short. That Johnson undermined his own domestic goals by his expansion of the Vietnam War is well known.

In the Cuban missile crisis, Kennedy stepped back from the brink of nuclear war and reached an agreement with the Soviet Union that included a promise by the U.S. to cease its effort to overthrow the Cuban government. In his American University speech, Kennedy called for rethinking the cold war.

“So, let us not be blind to our differences--but let us also direct attention to our common interests and to the means by which those differences can be resolved. And if we cannot end now our differences, at least we can help make the world safe for diversity. For, in the final analysis, our most basic common link is that we all inhabit this small planet. We all breathe the same air. We all cherish our children's future. And we are all mortal.”

The world system is much changed from what it was in the 1960s. During the Kennedy and Johnson years, the U.S. Gross Democratic Product (GDP) was nearly half the world total. Even with that economic clout, attempting to maintain U.S. hegemony undermined domestic reform goals. Today, the U.S. share of GDP is about 25 percent of world GDP. When one takes into account the many social benefits not measured by GDP, the U.S. position is weaker still.

The attempt to maintain U.S. dominance with outsized military spending – 37 percent of the world total in 2015 – has led to a series of endless unsuccessful wars. The damage inflicted on millions of people in other countries and on the tens of thousands of U.S. people involved in these conflicts is both sad and unnecessary. It’s time to return to JFK’s concept of paying attention to “our common interests,” resolving our differences peacefully, and making “the world safe for diversity.”

Progressives, unions, and the left, are seeking to achieve domestic reforms – the passage of the For the People Act of 2021 to protect voting rights, the Protecting the Right to Organize Act, Medicare for All, the $15 minimum wage, and the Green New Deal.  There are two ways to fund social programs and move to a more equal society. We need to increase taxes on the wealthy and corporations. The Ultra-Millionaires Tax Act proposed by Senators Elizabeth Warren and Bernie Sanders is a first step. Second, we need to shift funding from the military budget to social needs. To accomplish the latter goal means emphasizing peace advocacy.

One of Kennedy’s virtues was his ability to set aside advice from foreign policy and defense experts and to think independently. It helped that he had a sense of humor and, despite his high position, could show some modesty. After the Bay of Pigs failure, he commented to aides, “It’s just like Eisenhower. The worse I do, the more popular I get.” Whatever the truth of the charges of Russian interference in U.S. elections, Biden should remember that the U.S. intervened openly in the 1996 Russian election, helped overthrow the elected Ukraine government in 2014, and has a long record of interfering in other countries’ internal affairs.

President Barack Obama took some steps away from the new cold war campaign with the New Start Treaty of 2011.  He also took a step toward the relaxation of the blockade against Cuba.  Biden should follow up on Obama’s Cuba initiative by ending the sixty-year-old blockade of Cuba.

Returning to the themes of Kennedy’s American University speech could lead Biden to make lasting contributions to world peace.

On disarmament, Kennedy said: “Our primary long range interest in Geneva . . . is general and complete disarmament-- designed to take place by stages, permitting parallel political developments to build the new institutions of peace which would take the place of arms.”

About the United Nations and disarmament, Kennedy said: “we seek to strengthen the United Nations, to help solve its financial problems, to make it a more effective instrument for peace, to develop it into a genuine world security system--a system capable of resolving disputes on the basis of law, of insuring the security of the large and the small, and of creating conditions under which arms can finally be abolished.”

Today, a peace presidency would ensure access to vaccines against the coronavirus by the neediest nations. It would lend full support to the United Nations and the World Health Organization. It would shift funding from armaments to domestic needs and aiding the world’s needy. It would put an end to the new cold war and seek ways to cooperate with Russia and China. It would put an end to our endless wars and support Palestinian rights. It would set our sights, once again, on world disarmament.