Robert Cohen is Professor of Social Studies and Steinhardt Affiliated Professor of History at New York University, and the author of Freedom's Orator: Mario Savio and the Radical Legacy of the 1960s and co-editor of The Free Speech Movement: Reflections on Berkeley in the 1960s. 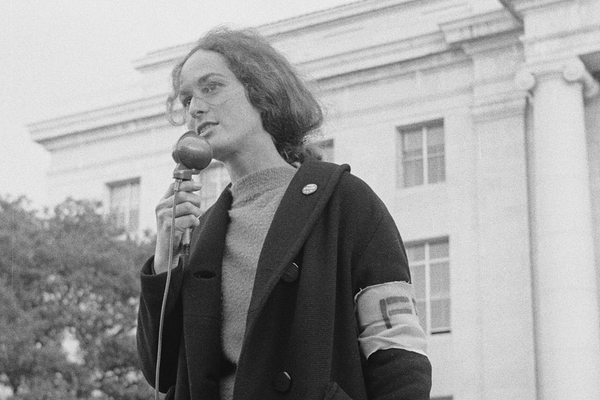 Although Louis Menand’s recent New Yorker article “The Making of the New Left” (March 22, 2021) offered perceptive observations concerning some aspects of the student movement of the early 1960s, its treatment of the Free Speech Movement – the first mass protest movement to use mass civil disobedience on campus in the 1960s – rendered women student activists virtually invisible. For Menand, Berkeley’s free speech struggle of fall 1964 was a battle between men, primarily between UC’s establishment liberal president Clark Kerr and the Free Speech Movement’s famed radical orator Mario Savio. Most US history textbooks have this same male character, quoting only Savio in their brief accounts of the FSM. As Savio’s biographer, I would be the last person to argue against quoting his powerful speeches. But one cannot understand the Free Speech Movement without recognizing the important role that women played in this student revolt.

To begin with, the first spokesperson for the free speech struggle at Cal – who was the movement’s key voice before it even took on the name “Free Speech Movement,” and before Savio occupied this role, was Jackie Goldberg, a veteran student leader who chaired the initial negotiations with the UC administration. Though Goldberg would soon be replaced by Savio as the Free Speech Movement’s key spokesperson, before that happened she played an essential role in achieving a peaceful resolution of the police car blockade.  With a police invasion imminent – aimed at breaking up the non-violent student blockade that was preventing the campus arrest of civil rights and free speech activist Jack Weinberg – Goldberg insisted that the free speech struggle’s negotiating committee sign an agreement, the Pact of October 2, ending the blockade and establishing a framework for further negotiations over the campus free speech dispute. Savio initially opposed the Pact, but was outvoted and went along with it reluctantly. Goldberg had been insistent that the Pact was needed to avoid  bloodshed, and  later tragedies like that seen at Kent State, where deadly force was deployed against student protesters, proved her right. Goldberg’s organizing and negotiating talents would later carry her to the Los Angeles School Board and City Council, and to the California state legislature where she helped to found the caucus championing LGBTQ+ rights.

The Free Speech Movement’s central publication, its newsletter, an eloquent voice for free speech, was edited by the socialist student activist Barbara Garson. Offering not merely movement news but witty mockery of the administration and humorous political cartoons, the newsletter avoided leftwing jargon and cliches, and narrated the free speech struggle with verve, candor, and militant tactical advice. This main communicative organ of the FSM operated independently of the FSM’s main governing committees (the Steering and Executive committees, as well as Press Central) and so was shaped by Garson, not by any male FSM leader.  Garson would go on to become the prominent author of All The Livelong Day and three other books on blue and white collar working people, as well as the popular antiwar play MacBird!

Over the course of the Free Speech Movement its most prominent female student leader was Bettina Aptheker. In Cold War America it was almost unheard of for a Communist to assume a leadership role in a mass movement. That Aptheker played such a role as an elected member of the Free Speech Movement’s most influential governing body, its Steering Committee, was a testament to her evident leadership ability and to the Berkeley student movement’s rejection of Cold Warrior anti-Communism. It showed that the FSM embraced a New Left ethos, judging activists and leaders on the basis of their character and the effectiveness of their work for democratic movement goals rather than their ideological or party affiliations. So at an early stage of the FSM, when UC President Clark Kerr red-baited the student movement, rather than deferring to this Cold War scare tactic, Savio and the FSM not only backed Aptheker but insisted that she be a featured speaker at the very next FSM rally, which she was.  Aptheker brought to the FSM valuable political experience, from her organizing off campus in the Bay Area civil rights movement and on campus in leading the WEB DuBois Club. Her Party contacts with organized labor in the Bay Area facilitated the union solidarity in honoring the picket lines of the FSM strike that followed the mass arrests in the FSM’s culminating sit-in.  Aptheker was admired as an eloquent movement spokesperson, an unusually patient negotiator, and as a level- headed and astute tactician.

On at least two occasions, Aptheker’s political judgment exceeded Savio’s in ways that proved enormously helpful to the FSM. After a particularly frustrating November 1964 meeting of the UC Board of Regents, in which the university’s leaders refused to consider the movement’s free speech demands and implied imminent punishment of FSM organizers, Savio insisted on convening a sit-in at the administration building. This despite the fact that the FSM’s leadership was split on whether to sit-in, and had initially rejected this act of civil disobedience (since there had been no time to educate and mobilize the campus). Savio insisted on the sit-in as an act of moral witness no matter what the consequences. Aptheker rejected this position on the grounds that this sit-in would result in isolation and defeat of the movement.  Once the sit-in began without mass support and was en route to failure, Aptheker helped talk the protesters into leaving Sproul Hall, so the aborted sit-in avoided futile arrests and punishment that might have crushed the movement.

Aptheker proved equally insightful on tactics at the mass Greek Theatre meeting convened by Kerr and his faculty allies on December 7, 1964. Kerr had refused to allow Savio or any student to speak at this meeting, aimed at imposing a political settlement without granting the campus free speech rights championed by the student movement. Determined to speak at this meeting, Savio was leaning towards rushing the stage just as the meeting was about to end. But Aptheker realized that such a tactic would look aggressive, and so suggested that Savio walk, not run, to the stage, which would come across better since the audience would observe his calm and deliberative approach and be eager to hear from him. Heeding Aptheker’s advice, Savio walked to the stage, and the aggression came not from him but from two campus police officers who grabbed Savio and dragged him by his tie away from the podium before he could say a word – an act of political repression that outraged thousands in the audience. This was a major turning point in the FSM, which paved the way for the faculty’s overwhelming vote, the day after this Greek Theatre incident, in the Berkeley Academic Senate, backing the FSM’s central demand that the university cease regulating the content of speech on campus.  Aptheker would go on to play a leadership role in the student movement against the war in Vietnam, the movement to free Angela Davis, Feminist and LGBTQ+ studies, and as prolific author and professor at UC Santa Cruz, who also crusaded against child abuse.

Nor was Aptheker the only politically skilled woman on the FSM Steering Committee. Philosophy graduate student Suzanne Goldberg was also an influential voice. Goldberg co-authored with Savio the Steering Committee letter to President Kerr just before the FSM’s culminating sit-in, informing Kerr that unless the free speech restrictions and threats of disciplinary action were lifted mass civil disobedience would result. She went on to a distinguished career as a clinical psychologist.  The Steering Committee’s lone conservative was a woman, Mona Hutchin,  a libertarian  who would later make headlines defying the sexist restrictions on women riding on the running  boards of San Francisco’s cable cars. And the leader of the so-called “moderates’” student revolt against the FSM leadership, which caused a brief but serious crisis within the FSM,  was also a woman, Jo Freeman, of the Young Democrats, who would go on the become a prominent feminist author and activist.

Since the FSM was a mass movement, heavily dependent on grassroots support and volunteer labor, it would be inappropriate to discuss women’s role in the FSM only in terms of leadership at the top. Women played a pivotal role in FSM Central, which functioned in a way somewhat analogous to a strike committee,  facilitating student support for the movement,  handling logistical issues,  facilitating communication within and  beyond the FSM, spearheaded by talented organizers Marilyn Noble and Kathleen Piper.  And though  the most famous FSM arrest was that of Jack Weinberg, since it sparked the police car blockade in October 1964, two months later women activists represented a major part of the mass of arrestees in the FSM in its culminating sit-in at Sproul Hall – at least 289 of the 778 protesters arrested in that sit-in were women.

It would be false to depict the FSM, a movement that erupted before second wave feminism had surged and raised consciousness about sexual inequality, as a completely egalitarian movement on gender. Women veterans of the FSM, most notably Aptheker, point to the ways that women’s ideas were often devalued and women talked over by men in FSM executive committee meetings, and the mistreatment of women as sex objects. And there were instances where women’s contributions to the movement were slighted, as when the report movement activists wrote on the history of political repression at Cal, in a research project co-led by Lynne Hollander and Michael Rossman, was dubbed “the Rossman Report.”  Still, it is true that within the FSM women were more prominent in leadership positions than was the case with early SDS, suggesting how contradictory and complex FSM history is on gender.

The sexual dynamics of the FSM and women’s place in the Berkeley student movement have yet to find their historian, and they never will unless historians break with the tendency of writers like Menand to misread the FSM by gendering it male.