Trump, Defying Custom, Hasn’t Given the National Archives Records of His Speeches at Political Rallies

Shannon Bow O'Brien is Assistant Professor of Instruction in the University of Texas at Austin College of Liberal Arts. 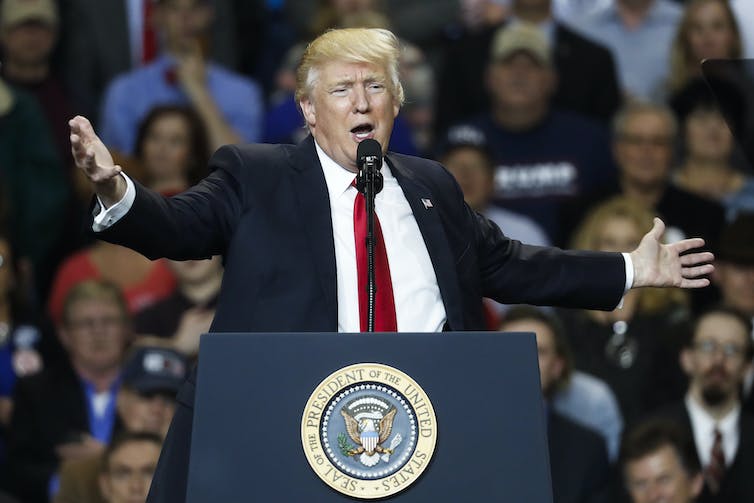 The White House never provided the National Archives with an official transcript of what Trump said at this rally in Louisville, Kentucky, on March 20, 2017. John Minchillo/AP Photo

Shannon Bow O'Brien, The University of Texas at Austin College of Liberal Arts

Public figures live on within the words they are remembered by. To understand the effect they had on history, their words need to be documented. No one is absolutely sure of exactly what Abraham Lincoln said in his most famous speech, the Gettysburg Address. Five known manuscripts exist, but all of them are slightly different. Every newspaper story from the day contains a different account.

In the case of modern presidents, for the official record, we rely upon transcriptions of all their speeches collected by the national government.

But in the case of Donald Trump, that historical record is likely to have a big gap. Almost 10% of the president’s total public speeches are excluded from the official record. And that means a false picture of the Trump presidency is being created in the official record for posterity. 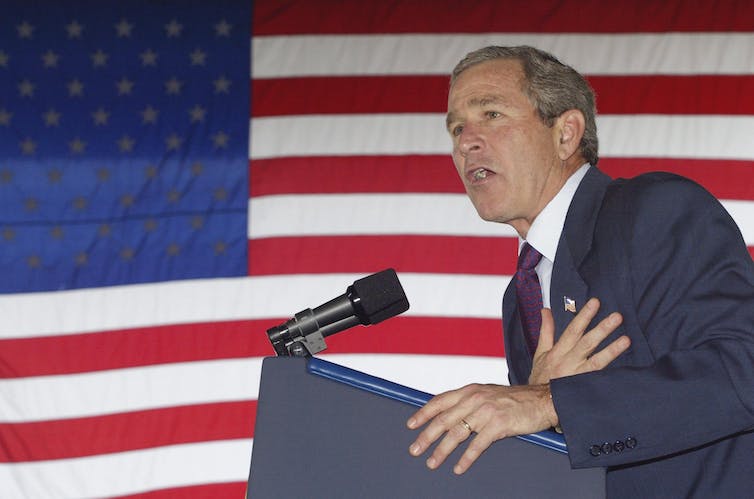 In speeches President George W. Bush would give when stumping for GOP candidates, he made the same joke 50 different times, apologizing to audiences that they drew the ‘short straw’ and got him instead of Laura Bush. Paul J. Richards/AFP/Getty Images

In 1957, the National Historical Publications Commission, a part of the National Archives that works to “preserve, publish, and encourage the use of documentary sources … relating to the history of the United States,” recommended developing a uniform system so all materials from presidencies could be archived. They did this to literally save presidential records from the flames: President Warren G. Harding’s wife claimed to have burned all his records, and Robert Todd Lincoln burned all his father’s war correspondence. Other presidents have had their records intentionally destroyed, such as Chester A. Arthur and Martin Van Buren.

So the government collects and retains all presidential communications, including executive orders, announcements, nominations, statements and speeches. This includes any public verbal communications by presidents, which are also placed as public documents in the Compilation of Presidential Documents.

These are part of the official record of any administration, published by the Office of the Federal Register, National Archives and Records Administration on a weekly basis by the White House press secretary. In most presidencies, the document or transcript is available a few days to a couple of weeks after any event. At the conclusion of an administration, these documents form the basis for the formal collections of the Public Papers of the President.

As a political scientist, I’m interested in where presidents give speeches. What can be learned about their priorities based on their choice of location? What do these patterns tell us about administrations?

For example, Barack Obama primarily focused on large media markets in states that strongly supported him. Trump went to supportive places as well, including small media markets like Mankato, Minnesota, where the airport was not even large enough to fly into with the regular Air Force One.

Presidential speeches often give a very different perception of an administration. Without all the pageantry, you can quickly get to the point of the visit in the text.

In speeches that President George W. Bush gave in the 2002 midterm election period, he made the same joke more than 50 times as his icebreaker. He would apologize that audiences had drawn the “short straw” and gotten him instead of Laura. His commitment to that joke gave a glimpse of his desire to try to connect to an audience through self-deprecating humor.

I found something odd when I began to pull items from the compilation and organize my own database of locations for the Donald Trump administration. I was born and raised in Louisville, Kentucky, and I pay attention to my home state. I knew that on March 20, 2017, Donald Trump held a public rally in Louisville, where in a meandering speech he touched on everything from Kentucky coal miners to the Supreme Court, China, building a border wall and “illegal immigrants” who were, he said, robbing and murdering Americans.

But when I looked in the compilation in mid-2017, I couldn’t find the Louisville speech. No problem, I thought. They are just running behind and they will put it in later.

A year later, I noticed the Louisville speech was still not there. Furthermore, other speeches were missing. These were not any speeches, but just Trump’s rallies. By my count, 147 separate transcripts for public speaking events are missing from Trump’s official presidential speech records. That’s just over 8% of his presidential speeches. 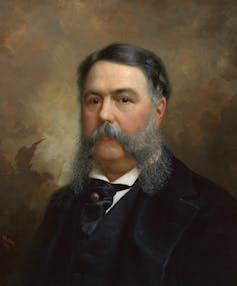 President Chester A. Arthur, whose family burned many of his presidential records. This was not uncommon for presidents’ families to do. Ole Peter Hansen Balling, artist; National Portrait Gallery, Smithsonian Institution

What’s in, what’s out

An administration is allowed to exclude personal records that are purely private or don’t have an effect on the duties of a president. All public events are included, such as quick comments on the South Lawn, short exchanges with reporters and all public speeches, radio addresses and even public telephone calls to astronauts on the space shuttles.

But Trump’s large public rallies, and what he said at them, have so far been omitted from the public record his administration supplied to the Compilation of Presidential Documents. And while historians and the public could get transcripts off of publicly available videos, that still does not address the need to have a complete official collection of these statements.

Federal law says that presidents are allowed to exclude “materials directly relating to the election of a particular individual or individuals to Federal, State, or local office, which have no relation to or direct effect upon the carrying out of … duties of the President.”

The law has been interpreted to mean an administration could omit notes, emails or other documentation from what it sends to the compilation. While many presidents do not provide transcripts for speeches at private party fundraising events, rallies covered by America’s press corps likely do not fall under these exclusions.

Why does it matter?

Government documents are among the primary records of who we are as a people.

These primary records speak to Americans directly; they are not what others tell us or interpret to us about our history. The government compiles and preserves these records to give an accurate accounting of the leaders the country has chosen. They provide a shared history in full instead of an excerpt or quick clip shown in a news report.

Since 1981, the public has legally owned all presidential records. As soon as a president leaves office, the National Archivist gets legal custody of all of them. Presidents are generally on their honor to be good stewards of history. There is no real penalty for noncompliance.

But these public documents, which I work with constantly, have so far always been available to the public – and they’ve been available quickly. Internal presidential documents like memos or email have a rigorous archival procedure that lasts years before they are even accessible. I have a record of every presidential speech from 1945 to 2021 – every president since Clinton has all their public speeches available online. Until President Trump, there have been no missing public speeches in the permanent collection. By removing these speeches, Trump is creating a false perception of his presidency, making it look more serious and traditional.

And by the way: That 2017 Louisville speech is still missing from the records in 2021.