Ken Ellingwood, a former Los Angeles Times correspondent now living in Abu Dhabi, is the author of First to Fall, a forthcoming book about Elijah Lovejoy. 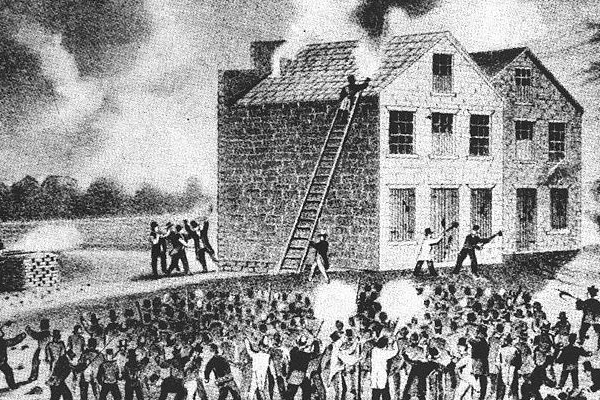 Wood engraving of November 7, 1837 mob attack in Alton, IL. Antislavery publisher Elijah Lovejoy was killed and his press, hidden in this warehouse, was destroyed, with the pieces thrown into the Mississippi River.

It was gratifying that Rep. Jamie Raskin would invoke an obscure 19th century newspaper editor while laying out the impeachment case charging President Trump with incitement in the brutal January 6 insurrection at the U.S. Capitol. The editor was Elijah Lovejoy, whose slaying at the hands of a proslavery mob in 1837 encapsulated a chilling wave of political violence that Abraham Lincoln, then an Illinois lawmaker, condemned as “mob law.”

As Congress confronts the aftermath of the pro-Trump crowd’s frenzied violence—some of which was directed against journalists trying to covering the events—it is a good moment to recall courageous editors such as Lovejoy who defended American freedom of the press in the face of violent and often well-organized efforts to silence them. Lovejoy’s story is a reminder that the liberties journalists hold dear are more fragile than we’d like to admit.

Over many months before he was killed in Alton, Illinois, Lovejoy, who ran a weekly paper called the Observer, was repeatedly targeted by mobs over his persistent writings against slavery—a stance considered akin to treason along the edge of the slavery South. A white Presbyterian pastor from Maine, Lovejoy was chased from St. Louis in 1836 over columns denouncing slavery as immoral. He scurried across the Mississippi River to the free state of Illinois to keep printing his weekly, but ran afoul of critics there, too. Three times, vigilantes destroyed his press and threw it into the river. Three times, friends helped Lovejoy buy a new one.

Lovejoy belonged to a small fraternity of editors—often devout Quakers or Presbyterians, mostly white—who used their printing presses in the decades before the Civil War to call for an end to chattel slavery, sometimes within the very states that practiced it. Early antislavery editors, such as the Quaker Benjamin Lundy, sought to prick the nation’s conscience before any large abolitionist movement had taken shape.

Writing against slavery could be dangerous—Lundy was assaulted by a slave trader about whom he had written in his Baltimore newspaper. William Lloyd Garrison, the firebrand editor of the Liberator, was publicly paraded by a Boston crowd with a rope looped around him. Antislavery editors were threatened, pursued by vigilantes and, in Lovejoy’s case, shot dead. Even in free states of the North, antislavery journalists were reviled as deranged fanatics bent on destroying the Union—an earlier era’s version of “enemy of the people.”

Except for Garrison, abolitionist editors have languished in the footnotes of the larger saga of slavery and the Civil War. That’s a shame. By using their newspapers to press for an end to human bondage, editors such as Lovejoy and James G. Birney elevated a twin cause: freedom of the press. These ink-stained abolitionists defied attempts to muzzle their papers at a moment when the young country was still working out how free its newspapers would be. Their defense of the right to publish on any topic, even unpopular ones, contributed to a national understanding of how a free press acts—even today.

Slavery’s defenders went to astonishing lengths to stifle public criticism, even in the North. Slave states outlawed “incendiary” abolitionist journals, which they said could incite slaves to rebel. Southern lawmakers sought vainly to get counterparts in the North to crack down on abolitionist materials at their source. Suppression extended even to Congress: the House of Representatives, dominated by Southerners and their Northern allies, approved a “gag rule” in 1836 to prevent discussion of slavery within its walls.

These steps and rampant mobs in the North represented a vast effort to suppress antislavery sentiment as a small but growing number of whites and free Blacks in the North had begun to mobilize. Pro-slavery forces in the South went so far as to intercept and burn sacks of antislavery journals sent through the U.S. mail.

But canny abolitionists spotted advantage in marrying the cause of the slave with freedom of the press. Birney, a White Kentuckian who liberated his slaves and embraced abolitionism, founded an antislavery newspaper in Cincinnati. Mobs twice wrecked his press, though Birney was uninjured.

Birney viewed mob attacks on the press as a chance to sow indignation in the North, and to cast abolitionists as defenders of civil liberties in the face of tyranny. “The contest is becoming—has become, one not alone of freedom for the black,” he told a fellow activist, “but of freedom for the white.” Even after his second press was destroyed while Cincinnati’s mayor looked on, Birney resumed publishing.

No editor carried the fight further than Lovejoy, whose Observer grew more strident after his flight to Illinois. Thugs in Alton sacked his office and threatened to tar and feather him. Local elites, including the Illinois attorney general, and hostile newspapers across the river in the slave state of Missouri employed pressure and thinly veiled threats to get him to stop writing about slavery.

Lovejoy refused, again and again, arguing that his freedom to publish on any subject was granted by the Constitution and God. “You may burn me at the stake…or you may tar and feather me, or throw me in the Mississippi, as you have often threatened to do,” Lovejoy told a gathering of citizens summoned to persuade him to quit. “But you cannot disgrace me.”

Days after that, on November 7, 1837, Lovejoy was fatally shot while fending off a pro-slavery mob. His press was hammered to pieces and tossed into the Mississippi. Lovejoy, 34, became the first American martyred in defense of journalism. John Quincy Adams, the Massachusetts congressman and former president, compared the shock of Lovejoy’s killing to “an earthquake throughout this continent.”

That was hyperbole. Yet Lovejoy’s struggle did help solidify an expansive understanding of press freedom for future generations of journalists. At moment when white nationalists now seek to turn “Murder the Media” into a right-wing brand, Lovejoy, and Birney remind us that an unfettered press has long tried to light our way, and that the liberties we take for granted didn’t come for free.