Eric Laursen is an independent journalist, activist, and scholar. His new book is The Operating System: An Anarchist Theory of the State (AK Press). 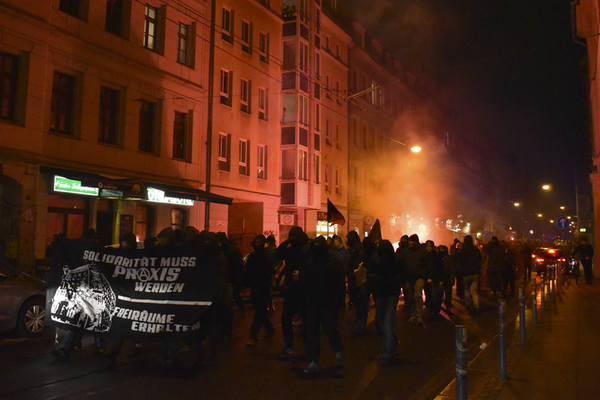 After a long and brilliant career as a human rights advocate, he was nominated by President Barak Obama and confirmed by the U.S. Senate to serve as the legal adviser to the U.S. Department of State under Secretary of State Hillary Clinton. In that capacity, Koh effectively wrote the rules of engagement to justify the use of lethal force in drone strikes.

“How on Earth,” Harcourt asks, “did someone who has dedicated his life to human rights then allow himself to become, in effect, an executioner?” The answer is that Koh, like so many would-be reformers, bought into the idea that we have to be governed, “and that we therefore have to justify a less nefarious form of governing rather than stubbornly insisting on our ungovernability.” This isn’t to say that human beings can get by without being governed in some manner, but that if their goal is to change a bad social and political system for the better, they must step outside it, refuse to be governed by it—and not be “drawn into the project of governing.”

Harcourt, a professor of law at Columbia University, civil rights lawyer, and leading critic of capital punishment and the carceral state, subtitles his book “A Critical Philosophy of Illusions, Values, and Action,” and his goal is as ambitious as that sounds: to situate critical theory historically, update it, define its practical political goals, and make it once again a powerful activist tool for the left. It’s sweeping, expertly thought-through, and full of useful ideas and insights for anyone who wants to turn social and political theory into strategies for changing the world, like his spin on ungovernability. This is what critical theory has supposedly been about since its origins in the early Marxist days of the Frankfurt School. And while it’s aimed primarily at the initiated—it never actually defines “critical theory”—it’s lucidly written and relatively short on jargon.

Which makes it an important book to pay attention to, even for those with no interest in abstruse political-social theories, because we urgently need new ways to critique the system we live in and develop new strategies to oppose and replace it. Harcourt (who, in full disclosure, is a friend) suggests some of these, but also inadvertently raises questions about how far critical theory’s practitioners are willing or able to carry their analysis.

Critique & Praxis starts with an appeal to critical theory practitioners to get to work and go back to basics. That starts with an admission that we live in a more fluid social and political landscape than either Marxists or 19th century liberals experienced, given their deterministic belief in scientific progress. “The political condition is an endless struggle that does not terminate in a perfect situation or a utopian state,” Harcourt argues, “but goes on forever so that in the end, the political struggle has to be itself part of the utopian vision and of what critical theory embraces.” We “do” politics because it’s in our nature as humans, one might say, and should look askance at any argument that we should not.

Claims of truth are always contingent, and attempts to assert one with finality—be it Christianity, Marxism-Leninism, or National Socialism—are likely to end in authoritarianism, Harcourt warns. But even when they don’t, they amount to an end-run around politics, an attempt to settle questions that can never fully be settled, avoiding the quarreling, contentiousness, and general messiness that accompany full democratic participation. Neoliberalism, the dominant developmental model and economic orthodoxy of the past four to five decades, is an example: a dogma that was accepted even by governments in the former Soviet bloc and that was supposed to override previous debates between socialism and Keynesianism, communism and free-market capitalism. Another example was the one-party state, a popular structural model in the developing world in the early post-colonial decades. Critical theory, then, should never allow itself to be thought of as a method for discovering truth. Instead, its practitioners should hone their ability to uncover and confront illusions masquerading as regimes of truth, such as the “free” market, upward social mobility, or the rugged individual. When we don’t, we can find ourselves making the same unfortunate choices as Harold Koh.

Politics is all about context, Harcourt argues. Critical theory can help us find the best way to confront oppression and authority—in this particular situation—through “a careful, respectful, contextual, case-by-case analysis of our political struggles that responds to the exact situation and the actually existing political economic regime in which we … find ourselves.”

There’s a personal angle to this approach as well. Rather than asking Lenin’s prototypical question for revolutionaries, “What is to be done?” a question usually addressed to others, we should be asking ourselves, “What more am I to do?” In other words, “what is my political praxis, and what work is it doing? Does it work, and if so, how?” This forces us to focus our political activity on addressing the immediate conditions of oppression and injustice, not on achieving some envisioned utopia—or truth.

Of course, we still need a social and political vision or set of values against which to judge our actions and their outcome. Only, this can’t be a regime, like the planned economy or the socialist state. “The effort to construct formal or procedural devices fails, whether in law, politics, or economics,” Harcourt writes. “In the end, we come face to face with values—and only values.” The “critical values” he has in mind are quite simple: “to create a more equal, compassionate, and just society where there is less oppression, marginalization, and domination, a lower social differential, and a greater possibility for everyone to achieve their fullest potential and autonomy.”

The difference between these values and the ones that capitalist and pre-capitalist systems have tended to espouse is that they are strictly political, not religious or moral. They are “valuable” because they help produce political change that moves in the direction of equality, autonomy, and an end to oppression.

Harcourt takes this focus on context a step farther—and that step is problematic. Is there any such thing as a political system that is inherently bad, or opposed to our critical values? Short of Nazism or Stalinism, it appears there is not. “Critical theorists simply cannot say ex ante that one type of political economic regime—centralized, nationalized, syndicalized, private, or anarchist—is more favorable to critical values than another,” he writes. “We can only judge the distributional outcomes of already existing political economies.” Any form of political organization is OK, in other words, so long as it gives us the latitude to pursue our critical values.

Harcourt sees this as a way to avoid the trap of preselecting a utopia that we must work towards: like communism or laissez-faire capitalism. But this suggests that, aside from Nazism or Stalinism, specific forms of political or social organization are value-less. This isn’t so. Specific values are inherent in particular forms of political, social, and economic organization. It may be possible to pursue some parts of an agenda for equality and the fulfillment of human potential within the structure of a capitalist state, for instance, but the capitalist state has values of its own: most importantly, the imperative for greater and greater economic growth, trumping concerns about exploitation of labor or the physical environment. It will always push back against any such effort.

Arguably, too, Harcourt’s menu of critical values is incomplete; if human equality and autonomy are “critical,” isn’t maximum democracy, assuring a genuine voice in decision-making for every person, critical as well? Any system built on the State is, arguably, a system driven in the opposite direction: to concentrate power in a select group, be they capitalists, technocrats, or blue-blooded royals, no matter what democratic forms it happens to adopt.

Harcourt rightly insists that the goal of critical theory should be to resist the production of “truths” that evade or neutralize politics and struggle. But the State, whether capitalist, fascist, Maoist, Islamic, or some other form, strives to impose its own truths on its populations, including the necessity of police, carceral systems, armies, weapons of mass destruction, and the pursuit of rapid economic growth above all. These too need to be critiqued and confronted if he’s to be consistent in his overall argument and if critical theory is to play the role he lays out for it. Otherwise, what’s to stop the State from defending or reasserting its own very different values? The dominant powers in Washington have spent the past 40 or so years rolling back the New Deal and the Great Society reforms, many of which required the State and capitalism to compromise on their single-minded pursuit of economic growth. While they haven’t completely succeeded, the election of a Democratic president and Congress last year is no guarantee that the process will be reversed.

If the State is a blind spot in Harcourt’s analysis, it’s not his exclusively; critical theory going back to Lukacs, Horkheimer, Adorno, and its other pioneers has always tended to ignore or look past the State when formulating its analyses. The problem extends all the way back to Marx himself, who still lies at the root of critical theory, even though it’s sloughed off many of his specific teachings.

In raising these questions, though, I’m aware that I’m making use of the very technique that Critique & Praxis encourages us to take up: to relentlessly critique all prescribed truths, expose the illusions that underlie them, and use that process to promote the basic values of freedom and equality. Critique and Praxis makes a powerful argument that the process of critical theory still has an important role in promoting political change. If it has “become increasingly limited to the academy and to professional critics,” as Harcourt says, his book clarifies its history and should help politically engaged people outside those circles to use it again as a tool for changing the world. The questions he asks—“What to problematize today? And how should I do it?”—are a good place to start.