Ron Steinman spent 35 years at NBC. He was NBC’s Bureau Chief in Saigon during the Vietnam War. In 1975 he joined the Today Show, spending 11 years as a senior producer in Washington and New York, including covering politics and overseeing production of the Today Show’s live special weeklong broadcasts from China, Moscow, Seoul, Vietnam and overseas presidential trips. He is the author of Death in Saigon, a murder mystery set in Saigon during the war. His latest book is "My Commonplace Book." Steinman won a Peabody Award, a National Press Club award, two American Women in Radio & Television Awards, and has five Emmy nominations. 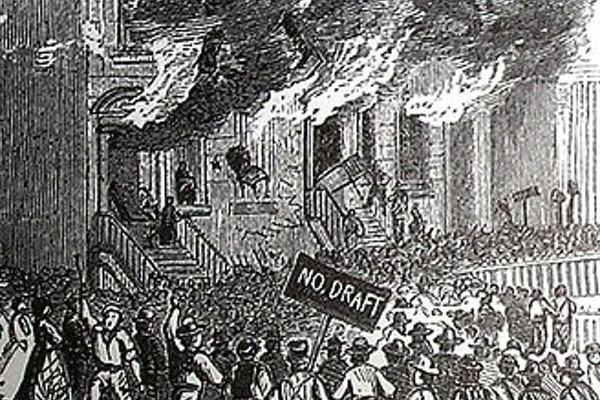 The House commission to investigate the insurrection on January 6 passed with a vote of 259 to 175 with 35 Republicans joining the Democratic majority. Despite the vote, as of now, it looks like a commission to investigate the insurrection at the Capitol will not happen because Republicans in the Senate seem to fear the truth about what happened on that fateful day. Partisanship in the form of Republican stonewalling is dominating an attempt to discover more facts about the January insurrection. But as serious as was the insurrection that day, we should not forget that demonstrations, gatherings, protests and riots are nothing new in American life as they are in many other nations. What took place on January 6 in Washington D.C. was not unique. As many have said, political violence in the United States is as American as apple pie. Here are some thoughts and musings on street violence in America since it became a nation.

The event of January 6, 2021 at the Capitol was only the most recent street protest to affect our lives. What happened on that date in Washington will sadly and likely happen again, not only in Washington but also in capital cities in many states around the country. There really is no way to fully protect the buildings where the nation and its states do its business. Though we all hope the "insurrection" was an aberration, enemies of democracy can easily repeat themselves. It is time we as a nation took our heads out of the sand and owned up to the fact that demonstrations, riots, rallies and gatherings that turn violent are unfortunately an American way of life. Look at the number of riots in America starting with Shay's Rebellion in 1786 and the Whiskey Rebellion that ran from 1791 to 1794. Nat Turner's slave rebellion in 1821 was not a riot but definitely an uprising and a cry for freedom, which common demonstrations usually are. I use the term to cover anything that happens in the street when crowds of people congregate for a common goal. It may be for a shared purpose depending on where you stand. Too often a peaceful demonstration turns into a riot because the police or army try to quell it or the demonstrators tire of being benign and rear their heads in protest.

I saw crowds gather on the streets of Guatemala, Paris, Belfast, Londonderry, Saigon, London, New York, Hong Kong, and Manila. Many times I saw those same crowds grow lively and often times deadly to themselves and their adversaries, police or army. All for a cause they believed in. If you as a viewer are aware of the world around you, witness the many race related demonstrations that start peacefully and devolve into deadly confrontations with the police and you get the picture of something deeply ingrained in our society and societies around the world. It is a way of standing up to authority and showing who you are.

The right to free assembly is sacred. The right to free speech is inviolate so long as it does not endanger anyone who disagrees with or efforts to impede freedom. During a protest or street march it is when demonstrators become anxious or obstreperous and when their avowed enemies, police or military become frightened and defensive, that trouble starts. It is when good sense and the inability to control emotion disappear allowing our worst instincts to dominate. It is when violence occurs and we see physical clashes that are impossible to control. The moment when a crowd of civilians clash with uniformed opposition is the moment when any chance for peace dies. Unfortunately, It happens frequently in America's history.

Before the Civil War there were more than 60 riots by abolitionists in the streets across America in pursuit of their cause against slavery. However, not everyone wanted to abolish slavery. Before the Civil War there were at least 50 recorded street demonstrations promoting slavery, 23 of them considered major. New York City had violent anti-draft riots against Lincoln's policies in the mid 1860s during the war. Before the "official" start of Reconstruction in 1870 a New Orleans race riot in July 1866 in which white rioters attacked free Blacks saw 46 killed and at least 146 wounded. It was a sad harbinger of things to come during the years of Reconstruction and the birth of Jim Crow.

Not all riots were racially inspired. The vicious Orange Riots of 1870 pitched Irish Catholics against Protestants in New York, a cultural theme carried over from Ireland. The death toll was over 60 dead; with some lynched on lampposts and many more injured who never received proper care.

Between 1870 and 1919 there were as many as 200 known demonstrations and riots across the United States. Many of those even then were encouraged and inspired as they are today by disenfranchised whites who feel threatened by their supposed loss of power to increasingly enfranchised, yet mostly powerless Black people. It is why we see people in the streets today marching in support of Black Lives Matter and sadly mourning the too many unnecessary deaths of Black people at the hands of police.

Today, these are not the only demonstrators on the streets of our cities. Called rallies, or gatherings, benign but still festering, they are dangerous camouflaged euphemisms for something that is deadly sinister. White supremacists stand in defiance of Blacks and liberals, or anyone for that matter who stands against them, almost all are their avowed enemies. Starting as seemingly peaceful get-togethers they often become angry, hostile confrontations with not only the authorities but also their open opponents.

Because of social media everything moves faster than ever. People gather, sometimes with planning, sometimes not, and then they march and erupt. We live in an era where peaceful rallies quickly become sour. As a nation we have never lived up to the basic tenets of the Bill of Rights and the Constitution. Equality is grand idea that increasingly seems to wither as we witness its decline. That does not stop people from striving for equal rights. But the he ugly aspect of who we are often seems to prevail. Can we as a people keep our darkest instincts in perspective and under control? Can we keep malice to a minimum and construct a life free from hatred and irrational emotion? In our current climate is that possible?

During the height of the Civil War when Abraham Lincoln was doing everything he could to keep the country together he understood better than almost anyone else what was at stake in America's search for its soul. In his Second Inaugural Address Saturday March 4, 1865, in Washington following two days of heavy rain and under still cloudy skies and very muddy unpaved streets, he said famously this at the end of the speech:

"With malice toward none, with charity for all, with firmness in the right as God gives us to see the right, let us strive to finish the work we are in, to bind up the Nation's wounds, to give care for him who shall have borne the battle and for his widow and orphan, to do all which may achieve and cherish a just and lasting peace among ourselves and with all nations."

As it applies today, is it a dream that we can fulfill? Can we reach its hope? Do we have the will? Only time will tell. In that hoped for spirit, would the new commission that passed the House be serious in its search for the truth. I remain cynical. I am certain that gross partisanship will prevail because the Senate wants no part of the commission. If the commission survives we should consider it the Olympics of politics. In the passion of competition, let the games begin.