Keep History Teachers Free to Teach, in Iowa and the Nation

Wallace Hettle is a Professor of History at the University of Northern Iowa. 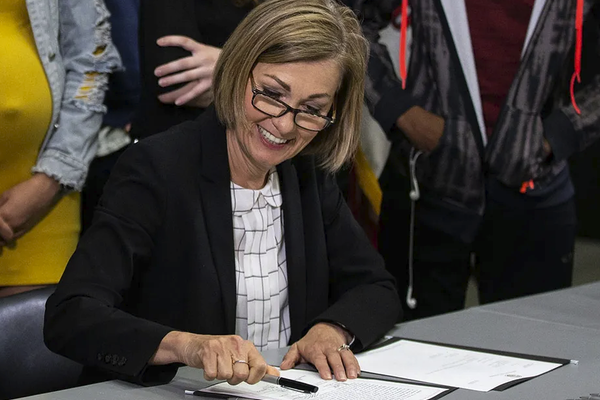 Iowa Governor Kim Reynolds has signed legislation restricting the teaching of racism in schools and colleges in the state.

The Iowa legislature has just passed a new law on teaching about racism in the Iowa schools. It is long, vague, and contradictory. It is a confusing, poorly drafted piece of legislation. It is clear, though, that it drastically restricts speech on the part of students and teachers. It is now law, but unlikely to have much legal impact as it is almost certainly unconstitutional and does not include tough enforcement measures.

Yet it still matters. We are losing many of our best college graduates to places like Chicago, Minneapolis, and Texas.  Our civic leaders try to win new businesses in the state yet employers are unlikely to invest in a state that looks like Mississippi, only with cold weather.

Reading this new law felt like skimming the Terms of Service on a commercial website, or carefully reading the warranty on a new toaster oven.  It left me wondering how such a mess received the support of GOP leaders.

Sadly, this law is purely political. It has arrived in the midst of a larger movement against Critical Race Theory (CRT) a doctrine almost solely taught in law schools. Yet it will damage faculty governance over teaching in universities, and, along with recent threats to academic tenure, make it difficult to recruit the best professors to our state. However, it meshes well with current Republican thinking in the age of Trump.  Iowa has a long tradition of local control of education. However, this law gives most power to the legislature. On a variety of issues, from hog lots to COVID-19 masking, the Iowa GOP believes in local control, except when it doesn’t.

The law seems to protect students against discrimination based on their “political ideology.” That sounds laudable, but it does not effectively define “ideology,” creating confusion. Other elements of the law seem equally problematic. For example, it prohibits teaching anything with the consequence that “any individual should feel discomfort, guilt, anguish, or any other form of psychological distress on account of that individual’s race or sex.”

I’m not a lawyer, but it appears that the legislature has just passed a law against hurt feelings. My students are adults, and I love hearing their varied opinions. But when they learn about slavery, Indian removal, or the Vietnam War, it might be distressing. Feel good history, which celebrates great men, might sound fine. Unfortunately, it obscures the fact that disagreement and dissent are crucial to our country’s past.

We have to tell the uncomfortable stories, the stories of Jim Crow, slavery, and race riots. Why? Because we can do better. The history of Reconstruction or the Civil Rights movement shows us that we HAVE done better.

We have a set of principles based on equality, derived from the Enlightenment. That is, we value freedom. It is precisely because we are committed to freedom that talking about unfairness and inequality can be so painful.

It can also be tremendously liberating; it offers the opportunity to change; to move closer to that American ideal of freedom. Let's try to get there. But we will always be uncomfortable. It can feel like pushing a boulder up a hill, only to see it roll back to the bottom. But that boulder won't stay at the bottom. That is because Americans want real history--the stories that tell about our best moments and also our worst.

Twenty-five years ago, I moved to Iowa in order to teach history. I had been told three things about the state: it was cold in the winter, flat, and had a great system of education.  Iowa winters are undeniably cold.  It is not flat, and my first walk up College Hill in Cedar Falls cured me of that mistaken impression. And it did have a great system of education. UNI may be a small school, but I love the students. They are willing to think hard about the past.  It is hard to define “Iowa nice,” but our students have it and I am grateful for that. Is UNI still part of a great system of education, known across the country, and stretching from kindergarten to college?  Maybe, but that tradition is hanging by a thread.  A key step in saving it would be studying history, but not the warm and fuzzy fantasies that the legislature has created.  There is a better way: let’s give teachers and professors, who have studied the field, a chance to do their jobs without stifling control from the legislature and governor in Des Moines.