Cocktail of the Week: The Versatile Mule

Kathryn Smith is author of the forthcoming book Baptists and Bootleggers: A Prohibition Expedition Through the South...with Cocktail Recipes. 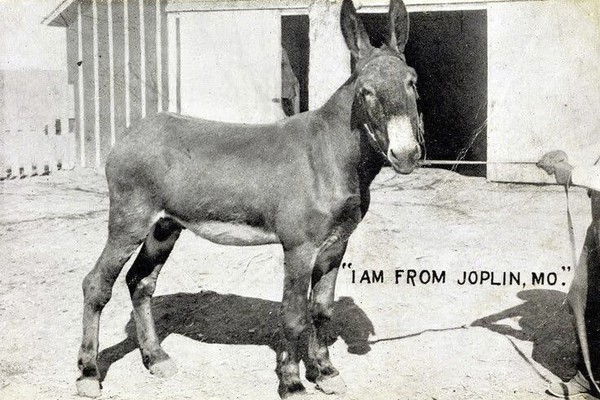 Republished with permission from the author's Substack.

It used to be in the South that the mule dealer was one of the richest men in town. We were a highly agricultural region and every farm had at least one mule.

The mule — a cross between a horse and a donkey — was a hard-working, dependable (if stubborn) farm animal that was eventually put out to pasture by the gasoline-powered tractor. (The image of a Missouri Mule is from the Joplin Public Library Postcard Collection.) But there’s another kind of mule that has been around since the 1930s that seems to grow more popular and dependable by the year.

I write, of course, of the drink called the Moscow Mule. It was created by the U.S. manufacturer of Smirnoff’s vodka (remember, the U.S. didn’t establish diplomatic relations with the Soviet Union until 1933, so vodka wasn’t around during U.S. Prohibition) and a Hollywood bar owner with a large inventory of ginger beer.

In the book Cocktails Across America * by Diane Lapis and Anne Peck-Davis, the credit goes to Jack Morgan, owner of the Cock’N Bull tavern, and John Martin, president of Heublein & Sons, who bought rights to the Smirnoff formula in 1939. The men put their heads together at Morgan’s bar and came up with a relatively simple drink composed of a shot of vodka, lime juice, and ginger beer over ice, and to set it apart, they served it in a copper mug, with the original mugs bearing the emblem of the mule. (Maybe it looked a little like this one, which I found on eBay.)

But the Mule wasn’t content to stay in Moscow. He went a-traveling around the country and around the world, with whatever the favorite liquor on hand was rebranding the drink. Thus in Kentucky, the favored version is made with bourbon, which I write about extensively in my forthcoming book Baptists and Bootleggers: A Prohibition Expedition Through the South…with Cocktail Recipes. Here’s my version:

Build the drink in a copper mug, beginning with lots of ice. Add the bourbon and lime juice, then top with ginger beer. Stir, and squeeze a fresh lime wedge over the drink for an extra kick of flavor.

Because of the diluting of the booze by ice and the non-alcoholic ginger beer, this is a relatively low-alcohol drink to sip on a summer afternoon. The copper mug keeps it nice and cold. Just don’t drink too fast; remember, mules are known to kick!

There are loads of other variations involving fruit and esoteric ingredients, as a quick internet search will reveal. Knock yourself out. But remember that warning about overdoing it. A mule kick to the head may not be lethal, but you won’t feel too good the next morning.

*By the way, Cocktails Across America is a really engaging book, combining drink recipes and stories of the post-Prohibition bar revival with picture postcards from the 1940s and 1950s. As readers of Mrs. Culp’s Diary know, I am a big fan of these linen postcards!