A little more than a year after nationwide protests erupted after George Floyd’s murder at the hands of the Minneapolis police, the public is deeply divided over how far the nation has progressed in addressing racial inequality – and how much further it needs to go.

Opinion on the current national reckoning over the history of slavery and racism in the United States casts these divisions into stark relief: Among U.S. adults overall, 53% say increased attention to that history is a good thing for society, while 26% say it is a bad thing and another 21% say it is neither good nor bad. 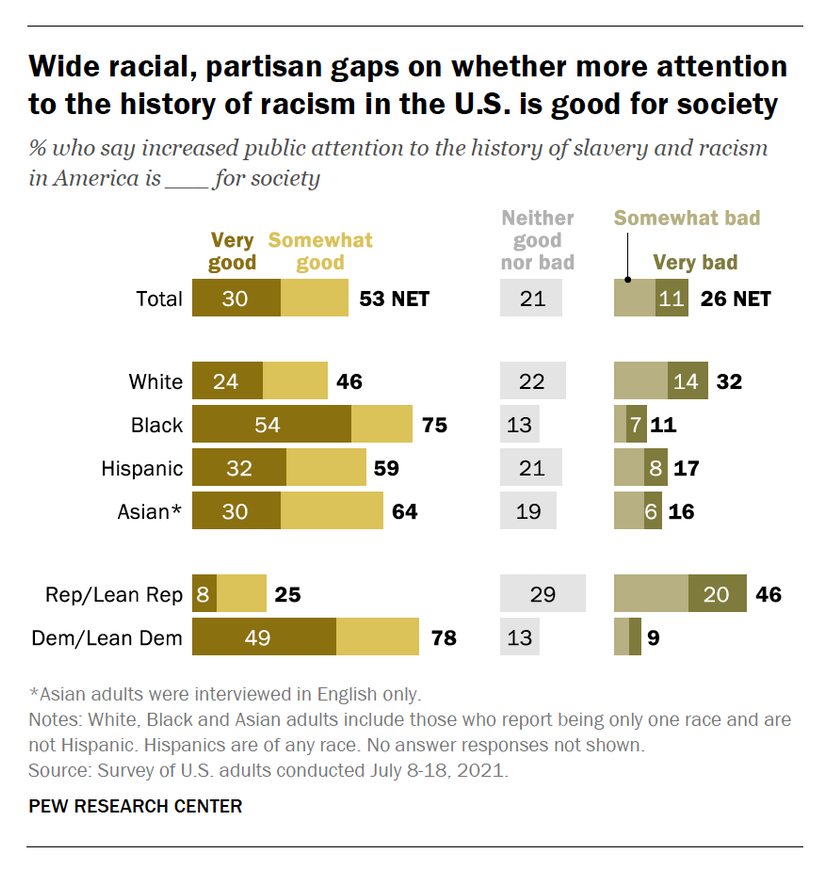 Among Black adults, 75% say heightened public attention to this topic is a good thing, with 54% saying it is “very good” for society. Majorities of Asian American (64%) and Hispanic (59%) adults also view this positively, though much smaller shares say it is a very good thing, compared with Black adults. Among White adults, however, fewer than half (46%) say greater attention to the history of slavery and racism in the U.S. is good for society, with just 24% saying it is very good – about a third (32%) say it is bad.

The partisan divide in these opinions is even wider: Just 25% of Republicans and Republican-leaning independents say greater attention to the history of slavery and racism is a good thing; far more (46%) view it negatively, while 29% see it as neither good nor bad. Democrats and Democratic leaners – across racial and ethnic groups – express overwhelmingly positive views of increased attention to the topic (78% say it is good for society).