Giles Tremlett is a contributing editor to the Guardian and Fellow of the Cañada Blanch Centre, London School of Economics. He has lived in and written about Spain for over twenty years, and is the author of Catherine of Aragon, Ghosts of Spain, and Isabella of Castile, winner of the 2018 Elizabeth Longford Prize. His newest book, The International Brigades: Fascism, Freedom and the Spanish Civil War will be published this week by Bloomsbury. 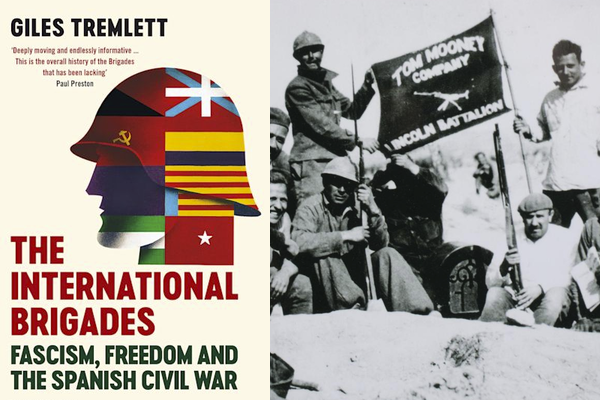 It seems obvious, then, that both the first Jews and the first Americans to take up arms and risk their lives to halt fascism’s spread must go down in history as heroes, with their story widely taught.

Sadly, that is not the case. The honor of being “first armed resisters” to fascism goes to the men and women of the International Brigades, a remarkable volunteer army of 35,0000 people from 85 of today’s countries who travelled to Spain in 1936 to defend its democracy against the fascist-backed rebels of future dictator General Francisco Franco.

At least one in seven volunteers were Jews, making up a force of 5,000 men and women who provide an alternative narrative to any claim that Jews were late to respond to the threat of the coming Holocaust.

Some 2,800 volunteers were Americans, with up to a third of them Jews and at least eighty African Americans also travelling to Spain (including, in this non-segregated unit, the first African American to command white American troops, Oliver Law). None, however, appear in the imaginary pantheon of American national heroes. And while Israel now honors them, they are also not well-known amongst Jews globally. The reasons for that are simple. Most were political radicals, many were communists and few were Zionists.

The Spanish Civil War was a first success for armed fascist expansionism and a testing ground for the forces, weapons and tactics of Adolf Hitler’s Nazi regime in Germany and Benito Mussolini’s Italian fascism. Franco relied heavily on them for troops, airmen and weapons, while the United States and other democracies embraced a form of appeasement known as “non-intervention,” which only served to embolden Hitler. In fact, many historians see the war in Spain as the opening battle of World War II, which started just five months after Franco declared victory in April 1939 and began a 36-year dictatorship.

The first Jews to join that resistance had travelled to the eastern Spanish city of Barcelona for another remarkable event – the People’s Olympiad. This was an alternative Olympic Games organized as a rival to the forthcoming Nazi showcase of the official Berlin Olympic in August 1936, which would be spoiled for Hitler as proof of the Aryan race’s natural supremacy by the legendary African American athlete Jesse Owens.

While Hitler had already enacted the 1935 Nuremberg Laws, declaring Jews non-citizens, the People’s Olympiad specifically welcomed them as “a nation.” It also boasted the faces of Black and Asian athletes on posters, just as the International Brigades would later put African American officers in charge of white American troops for the first time in history. It is difficult to express quite how remarkable this was for the times. Few countries outside the Soviet Union, indeed, explicitly backed racial equality or internationalism in the 1930s and even there it was more policy than practice. Spain, however, was governed by an elected left-wing coalition, the Popular Front, much like neighboring France.

Spanish fascists and their reactionary allies in the military, church and landed classes, found that intolerable. On the day the Olympiad was to start, they launched a failed coup which – with the crucial help of Hitler and Mussolini – became a civil war.

﻿Hungarian athlete Abrasha Krasnowieski and the exiled Polish soccer player Emmanuel Mink were amongst a handful of Jews who, instead of fleeing, immediately joined the workers militia units formed to stop the coup. They were the first of thousands of foreign volunteers who flooded into Spain over the coming months, many joining the International Brigades when these were set up three months later. Abraham Chakin, the American team’s wrestling coach, returned the following year and died fighting.

Over time, so many Jews enlisted that Yiddish became a language for passing on orders between people from disparate parts of Europe and the Americas. Sephardic Jews, meanwhile, found themselves working as translators, since their Ladino language was close to Spanish. "I am fighting against those who establish an Inquisition, like that of their ideological ancestors several centuries ago." US volunteer Chaim Katz explained, comparing Franco to the Spanish monarchs who had expelled the Sephardic Jews in 1492.

A separate Jewish unit, the Botwin company, was eventually formed – which published its own Yiddish newspaper. "All Jewish volunteers understand the importance of the mission they have to fulfil as chosen fighters of the Jewish people," it declared.

"The International Brigades became the vehicle through which Jews could offer the first organized armed resistance to European fascism," one of them, the American historian Albert Prago, observed later. But did they consciously travel to Spain as Jews, or as something else?

The International Brigades were organized by Comintern, the Communist International based in Moscow, but operated as a “popular front” force welcoming (in theory) any antifascist. Half of the volunteers were communists. Scholars disagree over how many Jews consciously identified as "Jewish fighters", rather than as atheist internationalists, but the two things are not contradictory. “I took up arms against the persecutors of my people—the Jews—and my class—the Oppressed,” Katz explained.

A letter I discovered in Amsterdam's International Institute of Social History archive while writing The International Brigades: Fascism, Freedom and the Spanish Civil War (published in August by Bloomsbury) expresses the ideological divide between more traditional Jews and those who had embraced left-wing internationalism, while also finding common ground. It was written by 23-year-old Belgian communist Piet Akkerman (who had changed his name from Israel) to his conservative mother, Bluma.

While a "gulf" divided her faith from his atheism, he said, "there is one trait that I have developed clearly; that Jewish stubbornness when it comes to holding on to an idea." Workers and Jews, Akkerman argued, shared a history of oppression. "Have not 99 per cent of the pogroms in the world been organized to distract attention from the misery of the people by provoking hatred towards the Jews, while those who are really responsible, the authors of misery, laugh in secret because instead of attacking their power, people slaughter the Jews?" he wrote.

Piet ended his letter by begging Bluma not to cry and telling her that "your son tries to be a man who both thinks and acts humanely." Both he and his brother Emiel, another volunteer, were killed. Their partners - Vera Luftig and Lya Berger – later volunteered as nurses, along with a dozen women from their Jewish youth group in Belgium.

Piet's letter fits what scholar Jaff Schatz has called "the moral affirmativeness, longing for justice, and universalist ethos shared by the Marxist vision and Jewish tradition".

Between one and two thousand Jewish volunteers died in Spain, while others ended up as prisoners of war, including those in a group sneered at by a Francoist officer as "those Americans, with their Jews, and Negroes and democracy". They eventually lost their war, and Franco ruled as dictator until 1975.

Britain, the United States and other democracies had pursued a policy of non-intervention in Spain - appeasing Hitler and Mussolini while trying to stop their own citizens from volunteering. Hitler was emboldened by that and invaded Poland, starting World War Two, soon after Franco's victory. Jewish International Brigade veterans often found themselves fighting in resistance movements and partisan armies across Europe. Vera Luftig, for example, played a key role in the Soviet Union's Red Orchestra espionage ring.

At Auschwitz and Buchenwald, Brigades veterans led the camp resistance groups that fought with their guards in the final days and hours before liberation.

For many years, Jewish history overlooked the brigaders. The Cold War narrative turned them into suspect allies of Soviet communism, while in Israel they were scorned for fighting a foreign war rather than (in the case of 250 volunteers who travelled from Palestine) staying home to fight against the Arab Revolt of 1936 to 1939.

Over time, however, that image has changed. Brigaders were mostly not Zionists, but Israel came to recognize that, in their fight, they had been defending all other Jews. At the same time, some veterans emigrated to Israel, finding greater acceptance there than in, say, communist Poland, which persecuted them after the Six Day war in 1967.

Final acceptance came from President Chaim Herzog (himself a former major-general) in 1986. "At the time of the Spanish Civil War there were 55 million people alive who would soon die during the Second World War. There were also six million of our brethren still alive in Europe who did not yet realize that a sword was poised over their necks. But there were people who realized just what a fascist victory in Spain would mean," he said.

"In the name of the people of Israel, the principal victims of the Nazis and Fascists, I hereby pay homage to the honour and glory of all those volunteer fighters who used their bodies as a dam against a wave of evil." Those words are inscribed on a monument to them in Barcelona, along with praise for "Jewish heroes" and their "glorious sacrifice" from former International Brigades Chief Commissar Luigi Longo.

The American volunteers found difficulty enlisting to fight in World War Two, since the army mistrusted them as political radicals. (Some volunteers, like Hollywood Ten member Alvah Bessie, would eventually be targeted and jailed by the House Un-American Activities Committee).

Exceptions included Irving Goff, an American Jewish volunteer and guerilla fighter, who was among those who joined the CIA’s predecessor, General “Wild Bill “Donovan’s Office of Strategic Services (OSS), as a specialist in behind-the-lines missions. Edward Carter, one of the few Black Americans allowed to serve as a frontline infantryman, was awarded the Congressional Medal of Honor.

The future Yale and Harvard professor classical studies Bernard Knox also served in the OSS. Amongst his tasks was to liaise with European partisan groups, many of them communist, that were led by former International Brigaders. When he was quizzed about his numerous medals from European armies during his Yale interview to study a PHD after the war, Knox was shocked to be told that he had been “a premature antifascist.”