How the Great War Helped the Drive for Prohibition

Kathryn Smith is a journalist and history writer, and the author of Baptists and Bootleggers: A Prohibition Expedition through the South... with Cocktail Recipes.

This article is republished from her Substack, "Baptists, Bootleggers and Everything In Between." 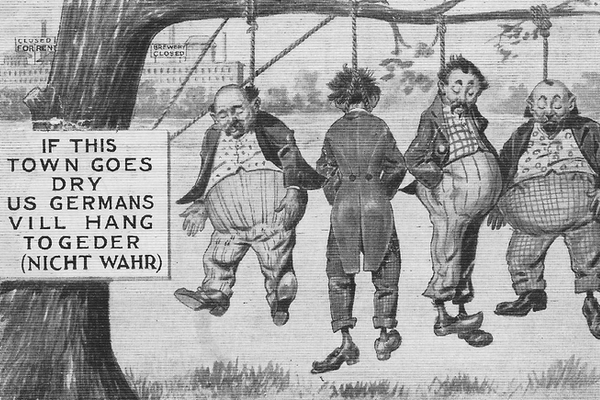 The Great War — better known as World War I — was drawing to a close this month in 1918. On November 11 at 11 a.m., an armistice was declared, and the war that had taken more than 20 million lives ended.

At the same time, states were voting on two amendments to the U.S. Constitution that had been passed by Congress. One, the Eighteenth, would make it illegal to produce, transport or sell any intoxicating beverage. The Nineteenth would enable women to vote. Both were ratified in 1919. When the surviving dough boys came marching home, they came to a very changed world.

Efforts by the Women’s Christian Temperance Union and its more politically powerful ally, the Anti-Saloon League, had dried up much of the country by 1919 through local option laws and state-wide prohibition. The only state in the South that still allowed liquor sales was, not surprisingly, Louisiana, I write in my new book Baptists and Bootleggers: A Prohibition Expedition Through the South…with Cocktail Recipes. The WCTU, which had been formed in 1871, espoused a number of progressive causes besides Prohibition, chiefly women’s suffrage, which its members believed was vital to giving women some control over their own lives. The ASL, established in 1893, threw its support behind suffrage as well, so it’s not surprisng that the two causes moved in tandem through Congress.

The war in Europe began in 1914 at a time that America was turning isolationist and there was tremendous distrust of the culture brought to the United States by a great tide of European immigrants. Germans, Italians and Irish came from drinking cultures, anathema to the white Protestants who dominated the non-urban parts of the country. Once war broke out in 1914, all things German became very unpopular in the supposedly neutral United States, and the ASL used that to its full advantage. Why? Because 80 percent of the saloons in the country were owned by or affiliated with German brewing companies. Their number had tripled during the last thirty years of the nineteenth century. Radical temperance advocate Carry Nation, asked why she had not brought her saloon-wrecking hatchet on a visit to Cincinnati, said, “I would have dropped from exhaustion before I had gone a block.”

It wasn’t just beer that suffered under anti-German sentiment. I write in my book, “Dachshunds were so despised as a breed that the American Kennel Club tried to rebrand them as ‘badger dogs,’ the German translation of their name. People named Schmidt changed their name to Smith. On top of everything else, the war pretty much put the nail in the coffin of the German brewers.”

When the United States entered the war in April 1917, the ASL went into over-drive. Its legal counsel, Wayne B. Wheeler, orchestrated propaganda and political pressure in a pattern that would be repeated by every single-issue lobbying group that followed. At his suggestion, opinion makers charged that the grain that went into the making of beer and liquor was depriving soldiers and the starving people of Europe of their daily bread. Makers of liquor, generally Americans of many generations, tried to distance themselves from the foreign beer makers, but they all went down together.

Under Wheeler’s skillful hand, the U.S. Senate began an investigation of the German-American Alliance, a lobbying office bankrolled by the German brewers. The hearings revealed such sensational findings as the million dollars in German war bonds held by the Adolphus Busch family and the fact that Busch’s widow — he had died of cirrhosis of the liver in 1913 — was caring for wounded German soldiers at her villa in Germany, the expense underwritten by the Anheuser-Busch Company. Writes Daniel Okrent in his excellent history of Prohibition, Last Call, “The hearings had branded the brewers’ underhanded tactics as outright disloyalty.”

Okrent quotes a thirty-four-year-old army captain in France who wrote back home to his fiancee in Missouri, “It looks to me like the moonshine business is going to be pretty good in the land of the Liberty Loans and Green Trading Stamps, and some of us want to get in on the ground floor. At least we want to get there in time to lay in a supply for future consumption.” The captain, future president Harry S. Truman, was later known to enjoy a drink of brown liquor — in moderation, of course.

One more factor was crucial in sealing the fate of John Barleycorn. The Sixteenth Amendment, creating a federal income tax, had been ratified in 1913. That relieved the government of its own alcohol dependence: the excise tax on alcohol brought in a third of federal revenue at that time.

The dry bandwagon rolled to victory, carrying such disparate riders as Southern racists, nativists, suffragists, Methodists, Baptists and Presbyterians (but not Episcopalians or Catholics), John D. Rockefeller and Henry Ford, evangelist Billy Sunday, social worker Jane Addams and the Ku Klux Klan. The Eighteenth Amendment, ratifed on January 16, 1919, declared that “After one year from the ratification of this article the manufacture, sale, or transportation of intoxicating liquors within, the importation thereof into, or the exportation thereof for beverage purposes is hereby prohibited.”

Now, imagine you are a young soldier coming home from the war. Somehow you have survived the hellish trench warfare, German U-boat assaults on your navy vessel, or the aerial dogfights of the fledgling army air force. In Europe, you have gotten accustomed to drinking alcohol; indeed, it was part of military life. Rum and whiskey were used medicinally to treat shock and shell shock. Soldiers were given tots of rum or gin before they went over the top at the trenches, and the aviators were famous for drinking while on duty and, especially, while on leave. (Sailors had to labor under the alcohol ban of Navy Secretary Josephus Daniels, a strict prohibitionist, who banned anything stronger than coffee. That’s why we still call it a Cup of Joe.)

If you were lucky enough to get to Paris for a few days, you learned the meaning of the song lyrics to “How ‘ya Gonna Keep Them Down on the Farm (After They’ve Seen Paree?)” Young men swilled real Champagne and French brandy, flocked to the Folies Bergere and availed themselves of the many ladies of pleasure in the French capital.

So the doughboys came home, many of them horribly mutilated and mentally unbalanced, some already desperately alcoholic, to a country where even 2.5 percent beer and light wine would be banned on January 16, 1920. Is it any wonder that so many of them high-tailed it back to Europe to join the ‘Lost Generation’?