John Bodnar is Distinguished Professor Emeritus of History at Indiana University.  His books include Divided by Terror: American Patriotism after 9/11 (Univ. of North Carolina Press, 2021) and The Good War in American Memory (Johns Hopkins Univ. Press, 2010). 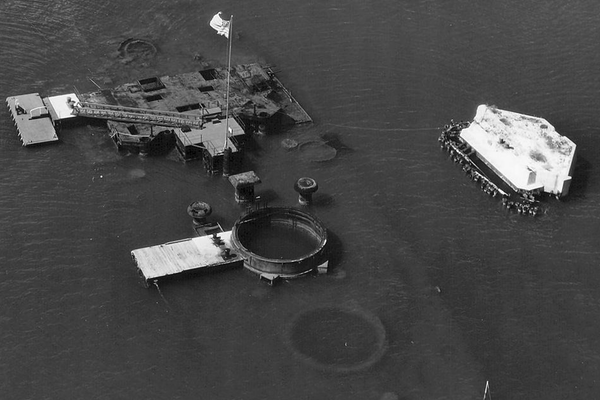 Hull of the USS Arizona, 1950s, prior to construction of present memorial. Photo US Navy National Museum of Naval Aviation

In 1941 Americans vowed to remember Pearl Harbor. Eight decades later it is clear that they have kept that promise.  A memorial sitting over the ruined hulk of the battleship U.S.S. Arizona has attracted millions of visitors since it was opened in 1962 to honor the men that died.  The 50th anniversary of the attack in 1991 was the occasion for a major media event with widespread television coverage and an emotional parade of 2,000 survivors whose appearance caused onlookers to break into a heartfelt rendition of “God Bless America.” In 2021 Essential History Expeditions promoted visits to Hawaii to meet “veterans of the Greatest Generation, especially those who are Pearl Harbor survivors.”

Before it was a symbol of patriotic virtue or a tourist destination, however, Pearl Harbor was a battle cry.  Citizens were urged to “Remember Pearl Harbor” to draw upon the deep wave of revenge that flooded the nation in 1941 and join a murderous quest for retribution that characterized the war in the Pacific. In time the American public turned the reality of a serious defeat and violent response into tale more noble and virtuous. The setback at Pearl Harbor was folded into a victory narrative that enhanced the reputation of America as an honorable land filled with patriots and devoid of the type of brutal behavior that marked its enemy.  The utter trauma of Pearl Harbor and the war it initiated was pushed to the recesses of public remembrances.

There are two small sculptures carved into the side of the World War II Memorial in Washington, D.C., dedicated in 2004, that imagine the response of the American people to the battle in Hawaii.  One carving depicts several generations of an American family listening intently to a radio broadcast in their home announcing the news of the attack on the American naval base.  A second bas-relief illustrates men enlisting in the armed forces and taking an oath to defend the Constitution of the United States against all enemies both foreign and domestic. In both engravings citizens are dutiful and go about these activities in a perfunctory fashion, giving the impression that they are ready to go to war without any hint of fear, rancor, or vindictiveness.

In 1941 Americans were anything but impassive as they reacted to Pearl Harbor. Infuriated by the bombings, President Franklin Roosevelt called December 7th “a date which will live in infamy” and vowed retribution. Thousands of his fellow citizens, sharing his desire for payback, rushed to recruitment offices.  Paul Fussell, who would later become a leading scholar of the war, recalled being in college in Los Angeles when he heard the news.  He felt a sudden urge to fight and to destroy the Japanese for their “premediated invasion.”  In Waterloo, Iowa, five brothers from the Sullivan family joined the navy to avenge the death of two friends who had died when the U.S.S. Arizona exploded.  Admiral William Halsey sought to rally naval forces by calling upon them to “kill Japs; kill more Japs.”

The American eagerness to hit back at the Japanese was fueled not only by anger and a militant sense of patriotism but by a deep-seated racism.  Americans had long viewed the Japanese as an inferior race unable to match the technology and military might of the West.  Historian John Dower has argued that Pearl Harbor not only stoked the rage of Americans because it was deadly, but because it was humiliating to take such a blow from a people they had badly underestimated.  In interviews conducted by the Library of Congress just after the attack, a man from North Carolina expressed the hope that “Tokyo would be set on fire . . .  I don’t care if they burn.” Richard Wright, a noted African American writer, caught the sense of hatred that permeated the moment when he wrote that “the average white man would fight Japan for fun.”

Unfortunately, racist thoughts of the time had severe repercussions for Japanese Americans living in the United States.  The federal government soon began rounding-up these long-term residents and putting them in internment camps. Federal officials went to great lengths to downplay the extent these forced relocations ruptured the lives of these citizens and argued detention was a “military necessity.”  A government sponsored film entitled Relocation even suggested Japanese Americans were happy to cooperate in this effort at forced removal.

The attempt to remove threads of anger and racism from the remembrance of Pearl Harbor began long before the execution of artwork at the World War II Memorial. Even in the 1940s echoes of American vengeance were replaced by strains of heroic patriotism. In 1942 the Office of War Information produced a documentary film entitled December 7th, which minimized not only the devastation of the attack but the suffering of families who lost loved ones. The movie did show some of the physical damage done at Pearl Harbor, but in other respects it diminished the realities of trauma and death by stressing that after the first wave of Japanese bombers, American fought back “heroically.”  It then presented film of a few of the parents of the fallen as they went about their normal lives with no hint that they might be overwhelmed by sorrow and grief.

In 1958 the Pearl Harbor Survivors Association was formed to “honor and shield from neglect” the graves of comrades who died to “protect the United States from its enemies.” Although the focus on heroism and honor helped to mute harsher realities from the past, American valor was not a fallacy. Many fought and sacrificed out of a belief in patriotic service. The virtue of their actions, in fact, became the dominant motif of remembrance, enshrined permanently in the Arizona memorial, which declared that “the war had a noble purpose, and the dead did not die in vain.”  Visitors can still see the hulk of the ship containing the remains of the dead. When the battleship U.S.S. Missouri was brought to Pearl Harbor in 2008 to stand nearby, the bookends of a heroic victory narrative were now in place—a story beginning with the Arizona exploding and ending with the Missouri, upon whose deck the Japanese surrendered.

It was harder to blunt the bitter realities of the war the way the 1942 OWI film did, however, when body parts were identified and brought home to families who had privately grieved for decades. Many of the dead at Pearl Harbor were blown to bits or left entombed in sunken ships, leaving their next of kin wondering what exactly happened to them. In the case of the U.S.S. Oklahoma, some 423 sailors and Marines were left in the hull of their vessel until they were retrieved in 1943. By that time authorities found only a mass of jumbled bones with no sense of their identity. Body parts were simply buried in Hawaii for years until science discovered the many uses of DNA and the possibility that samples from kin might allow for the identification of the remains.  In 2015 the Defense Department created a unit called the Defense POW/MIA Accounting Agency to investigate the missing from various wars, a decision that finally enabled officials to learn the identity of some of the unknowns from battleships like the Oklahoma and disrupt decades of trying to minimize the human costs of the war.

We can change our political memories but not our biological ones.  DNA gives us inherited characteristics from our parents that are not yet susceptible to manipulation. When family members were asked for DNA samples and learned that long-lost loved ones might be coming home, they began to disclose to reporters aspects of the war’s legacy that had remained outside the glare of large public memorials and celebrations. They revealed a remembrance steeped more in remorse than victory or patriotic sacrifice.  Until her death, the mother of Ray Thinnes of Milwaukee, for instance, waited for a knock on the door from her lost son; she felt he might have suffered from amnesia after the battle and lost the ability to find his way home.  A niece of Eugene Eberhardt of Newark, New Jersey told reporters that he had never been forgotten by his family and that every Memorial Day they would bring out his photo and simply raise a toast to him.  Upon seeing the casket of his uncle, Carl Door, Thomas Door cried because he had witnessed for years how much his grandmother grieved for the son she lost.  The family of Victor Tumlinson had placed a gravestone near his home in Texas in the 1940s even without any remains. When they learned that because of DNA testing parts of him would finally be returned from the war, they divulged that his family talked about him constantly over the years. A niece said she always wished she had been able to know him. Tumlinson’s family even kept a “wooden heart” he had given to his girlfriend and two telegrams his parents received from the government; one reported him missing and the other indicated that he was dead. Relatives explained that his mother often exclaimed, “I wish they would bring my boy home.”

Wooden hearts and mothers’ sorrows are not normally the stuff of war commemorations.  And no nation wants to be remembered for racist or violent impulses.  Noble warriors and great generations are more appealing than vengeful rants and private sorrows. In looking at the American remembrance and misremembrance of Pearl Harbor, it is clear the nation never forgot.  What it recalled, however, was far from the way it really was.