Dr. Billy J. Stratton is an associate professor in the Department of English at the University of Denver, where he teaches contemporary Native American/American literature, Native/Indigenous studies, critical theory, and writing. He is the author of Buried in Shades of Night: Contested Voices, Indian Captivity, and the Legacy of King Philip's War (University of Arizona Press), and has had the honor of working as a partner and consultant to Arapaho and Cheyenne Sand Creek descendent representatives. 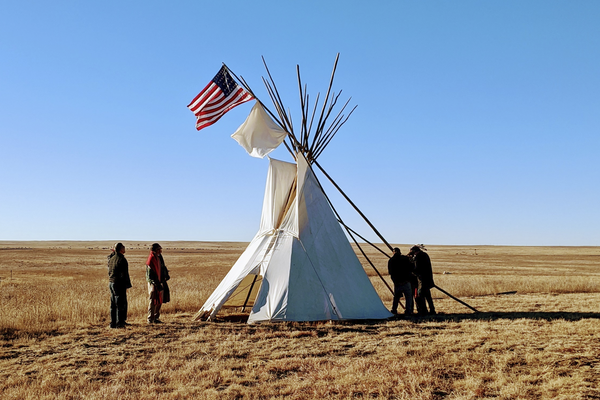 Cheyenne and Arapaho Sand Creek descendants observe the anniversary of the November 29, 1864 massacre. Photo by author, 2021

November 29, 2021 marked the 157th anniversary of the Sand Creek Massacre in what is now Southeastern Colorado. Northern Cheyenne Sand Creek descendent and formal tribal vice president Conrad Fisher describes the event as “a memory that is always present in the lives of Cheyenne and Arapaho people.” This year’s anniversary also marks the second that has occurred under the pall of the COVID-19 pandemic, a global catastrophe that has prevented Arapaho and Cheyenne tribal members from carrying out the Sand Creek Massacre Spiritual Healing Run.

While the impacts of the pandemic on human societies have been immense, with over 2.2 million deaths world-wide and over 805,000 Americans and counting, Native communities have been especially hard hit. This is due to persistent lack of access to quality healthcare, the social isolation imposed by the reservation system, and the lack of employment and education opportunities that so often consigns people to poverty. These conditions are related to the historical mistreatment and genocidal policies Native American people have endured since the onset of colonialism in North America over 500 years ago. The Sand Creek massacre is, sadly, but one shocking incident in the sheer enormity of this violence.

That the pandemic itself is a disaster that some continue to disbelieve, while infection itself can result in the long-term impairment of memory, serve as reminders in another way of the precarious nature of memory and life itself, with the lingering trauma associated with disaster. Such are the forces that often act to further estrange and divide people from one other and from a shared memory of the past, the lessons of history, and our inherent connectedness as human beings.

The nature of these connections is certainly not lost to Cheyenne and Arapaho people. Many within these communities have fought tirelessly to assert the validity and recognition of their specific historical experiences and cultural survivance in the wake of the assaults that came with the processes of Manifest Destiny and “progress.” Conceived in a Native context by Anishinaabe storier, Gerald Vizenor, survivance combines survival and resistance to emphasize the ongoing active presence of Indigenous peoples in a colonized world, and as a rejection of dominant historical narratives that often serve to diminish Native agency while consigning Native peoples to the perpetual status of tragic victims. Within this socio-historical context, November 29th marks the anniversary of a catastrophe that embodies the cruelty of colonial violence, the devastating effects of land loss, and the ongoing impacts of intergenerational trauma. In the words of Fisher, they also exemplify a psychological process by which “somehow we can become human beings that no longer value the lives of other human beings.” Still, it is also a testament to the strength, agency, and irrepressible spirit of Arapaho and Cheyenne people.

The brutal attack itself, which is still shamelessly called a “battle” by some, was ruthlessly perpetrated against a peaceful encampment settled near Fort Lyon and under the official protection of the US government. The Cheyenne and Arapaho people who were there on that fateful day consisted mostly of women, children, and elders, led by their peace chiefs, with the assault carried out by military forces led by the Minister Colonel John Chivington. The brutality commenced in the early morning hours of November 29, 1864 and would continue in all manner of depravity and evil for over 8 hours, after which at least 220 people lay dead. Of those who were able to fight off the attackers and escape, there were many who only managed to do so with wounds and scars that would bear witness to this shameful act of cowardice and betrayal for the rest of their lives.

The sheer inhumanity of the massacre evoked shocked reactions--even in an era so potently shaped by the extreme violence of the so-called Indian Wars--once accounts of the appalling brutality began circulating. Significant among these were letters written by two officers on the scene that day, Silas Soule and Joseph Cramer, who refused to participate in the killing while ordering their troops to stand down.

Military and congressional investigations were launched soon afterwards and issued harsh condemnations of the massacre upon their completion. They forced Colonel Chivington from his military commission and prompted the resignation of territorial governor John Evans, who in his position bore the responsibility of maintaining peace with the Cheyenne and Arapaho, while also raising the main force that carried out the massacre. According to former Colorado State Historian David Halaas, John Evans was the person “most responsible” for the massacre due to his “creation of the Third Regiment. Think of the Third Regiment as a loaded gun. He handed that loaded gun to Chivington, and Chivington pulled the trigger.”

Despite official denunciations, the massacre achieved its intentions as Evans would remark later, “the benefit to Colorado, of that massacre, as they call it, was very great, for it ridded the plains of the Indians. . .” With the dispossession of the Arapaho and Cheyenne peoples of their ancestral lands and extinguishing of claims sanctified in treaties, Colorado territory and the larger American West were further opened to settlement via the expansion of the transcontinental railroads.

Yet, the Sand Creek Massacre, like other examples of settler violence in American history dating to the vicious Puritan assaults against the Pequot in the 1630s (incidents seldom spoken of in celebrations of the mythical first Thanksgiving), continue to be excluded from dominant narratives of American history. For Arapaho and Cheyenne communities, the massacre exists as a perpetual presence, operating as living memory and history as much as a site of enduring trauma. As Northern Arapaho educator Gail Ridgley, a descendant of Chief Little Raven emphasizes, “our people have survived genocide and dealt with the effects of historical trauma” from the Massacre and its aftermath--experiences that mark the dispossession of their lands and forced removals to Wyoming and Oklahoma.

Out of these contexts of historical understanding and preservation of tribal memory, Arapaho and Cheyenne people participate in annual commemorative activities for the Sand Creek Massacre. This includes ceremonial practices that occur during community gatherings involving travel to the Sand Creek site by members of the Northern Arapaho, Northern Cheyenne, and Southern Cheyenne and Arapaho nations. These assertions of communal memory and perseverance are reverently observed each year in the days before the anniversary. From this sacred site where the pain of ancestors is remembered and voices carry in the wind, runners retrace the route of the murderous soldiers taken in their return to Denver in possession of grisly trophies that served as gruesome confirmation of their horrific deeds, while also being used in celebrations that treated them as returning heroes.

This community event centered at the hallowed ground of Sand Creek, the only Native American massacre site to be granted National Park status, remains an essential act to, in Ridgley’s words, honor, remember and memorialize” their ancestors, but also to serve as a kind of “ceremonial for burial because there were no ceremonies performed for their dead at the time.” For them, the prayers, honor songs, and stories that give substance to their presence at the site, represent acts of sacred obligation ensuring that the memories of those who experienced the horror of that day shall never be forgotten. For Ryan Ortiz, another member of the Northern Arapaho Tribe and Sand Creek descendent, the ongoing commemoration of Sand Creek is of critical importance as it speaks to the distinctions between understanding and historical amnesia while observing, “if we lose these memories, those soldiers will have succeeded in what they set out to do that day when they murdered our people.”

Thus, the necessity of such acts of engaged memory carries the sense of active presence and historical agency, while rejecting the incapacitating narratives of tragedy and victimry, expressing an example of survivance as conceived by Anishinaabe writer, Gerald Vizenor. Hence, such observances and practices form vital elements of healing against the weight of historical trauma, while being essential to more complete and inclusive understandings of American history. These are insights that many Americans well understand through generation-defining events like Pearl Harbor or 9/11, while, at the same time, cultivating a profoundly ironic sense of historical ignorance of the Sand Creek Massacre and similar atrocities perpetrated against Native peoples in the annals of American history, and in the stories and myths that shape the American consciousness and national identity.

Eugene Blackbear Jr., a Southern Cheyenne Sundance leader and Sand Creek descendent asserts that the continued commemoration of Sand Creek is as important as ever since, “Cheyenne people must always remember our relatives who lost their lives” there. But, as Blackbear also reminds, such acts of remembrance go beyond Cheyenne and Arapaho communities, as the “Spiritual Healing Run is a way that we forgive our oppressors and move forward with respect and honor!” The significance of the Healing Run as a space for healing is a point that Ortiz reiterates, “healing isn’t just for us, it’s for everyone.”

Despite the burdens of this painful experience, the ongoing commemoration of the Sand Creek Massacre and of relatives who were there that day through prayer, song, and story, acts as a powerful assertion of cultural survivance within their communities, and against all odds. As Ortiz states with such eloquence and passion, “we are a praying people, and we are the prayers of the people for future generations. I am answering their prayers, I am meant to be here.”

In a broader sense, these sentiments also recall the deeply affective words offered by America’s current poet laureate, Joy Harjo (of the Muscogee (Creek) Nation), in a similar context: “Everyone laughed at the impossibility of it,/ but also the truth. Because who would believe/ the fantastic and terrible story of all of our survival/those who were never meant/ to survive?” ("Anchorage" from She Had Some Horses, Thunder Mouth's Press, 1983).

Remember November 29th and remember Sand Creek, on this day, throughout this year, and all days and years to come.