The son of a German Jewish refugee, Charles Dellheim is Professor of History at Boston University and the author of Belonging and Betrayal: How Jews Made the Art World Modern (Brandeis University Press, September 2021). 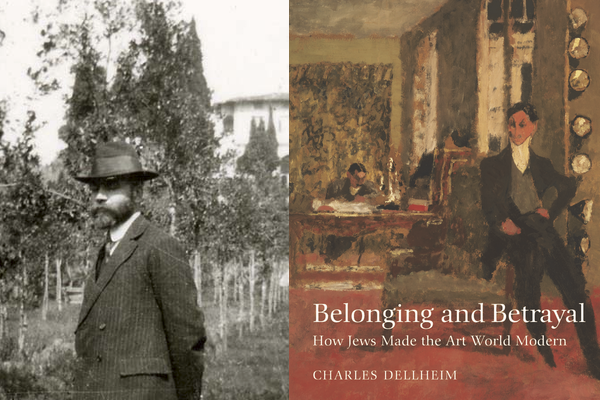 Anyone who knows anything about the Isabella Stewart Gardner Museum knows that, in the early hours of March 18, 1990 thieves stole thirteen paintings from its collection. The empty frames on its walls poignantly testify to the devastating loss. Darkly enthralling as this art heist may be, we should not let it obscure the fascinating story of how an unlikely pair—an upper-class woman and a poverty-stricken Jewish immigrant—built one of America’s finest museums.

One of Boston’s most celebrated women, Isabella Stewart Gardner was, by origin, a New Yorker, the daughter of a wealthy department store owner. Her marriage to a Brahmin stalwart propelled her to the exclusive apex of Boston society. Intelligent, self-possessed, and fiery, her unconventional streak raised practiced eyebrows in the Back Bay. Some considered her “too fast” for Boston. A more pliable woman might have spent her life fitting in; we know Isabella because she was determined to stand out. A woman in search of a mission, she diverted herself with the company of promising young men with good looks.

None fit the bill better than Bernhard Berenson. And none would have seemed a less likely choice for the haughty Mrs. Gardner. A friend of his future wife, Mary Smith, pointed him out to her as the most brilliant member of his Harvard class. This “beautiful and mysterious youth” was a Russian Jew born in a shtetl where he lived until his family came to Boston when he was ten. Bernhard, the “family genius,” craved the success denied to his erudite father, who had failed to parlay peddling into prosperity.

Intellectual prowess took young Berenson from Boston’s now vanished West End to attend Boston Latin High School and then Boston University, where he spent a year before crossing the river and entering the gates of Harvard Yard. Much as the impoverished youth resented the dominion of “Angry Saxons,” he was the first Jew lionized in Brahmin Boston. Believing and belonging went hand in hand. Berenson became an Episcopalian. Even so, he evidently continued to regard himself, as he told Mary Smith, “as a Russian and a Jew.” Regardless, Berenson’s gifts inspired great expectations in his patrons, Mrs. Gardner among them.

Fine art and high aspirations united the wealthy heiress and the poor immigrant. She endeavored to make her mark in Boston society through culture and philanthropy, impeccable pursuits for “Proper Bostonians.” The fact that the Boston Museum of Art, still in its infancy, had to date amassed only a modest collection cleared the way for Mrs. Jack, as she was called, to begin collecting art in earnest. This she did with aplomb. Her acquisitions included Vermeer’s The Concert and Manet’s Chez Tortoni, both of which were lost in the Gardner robbery.

Berenson’s path to art was complicated and fraught. During his Russian Jewish childhood, the second commandment’s ban on “graven images” was taken literally. As a result, he grew up in a world where fine art was either altogether absent or tied to forbidden churches, terrifying places that were associated with the persecution of Jews. No wonder Berenson was overwhelmed by the discovery of art, which he initiated at Harvard and consummated in Europe. He scoured palaces, churches, and museums in search of aesthetic experience and understanding. After abandoning the dream of becoming “the next Goethe” (no one would have accused him of thinking small), he drifted for a time. This angered Mrs. Gardner, who had helped finance his travels and wanted a return on her investment. For his part, Berenson eventually found his vocation as an art critic and connoisseur. His astonishing eye enabled him to authenticate works of art. He put these skills to practical use by acquiring art on behalf of his Boston connections. When he published his first book, The Venetian Painters of the Renaissance, he made a point of sending it to Mrs. Gardner. She happily welcomed back the newly successful prodigal son.

Back in his erstwhile patron’s good graces, Berenson made her an offer he knew she could not refuse. He tempted her with the prospect of purchasing a Titian masterpiece, The Rape of Europa. Mrs. Gardner could not, and did not, resist. So began the stormy alliance that accounted for many of the great paintings assembled in the Italian villa in the Fens.

The Gardner-Berenson story points to broader themes: The vast sell-off of aristocratic collections, the aesthetic appetites of the new capitalist rich, the making of American museums and, not least, the pivotal role played by Jewish outsiders in this drama. But most importantly, it reminds us that women and immigrants have played, and continue to play, an inestimable role in our culture.